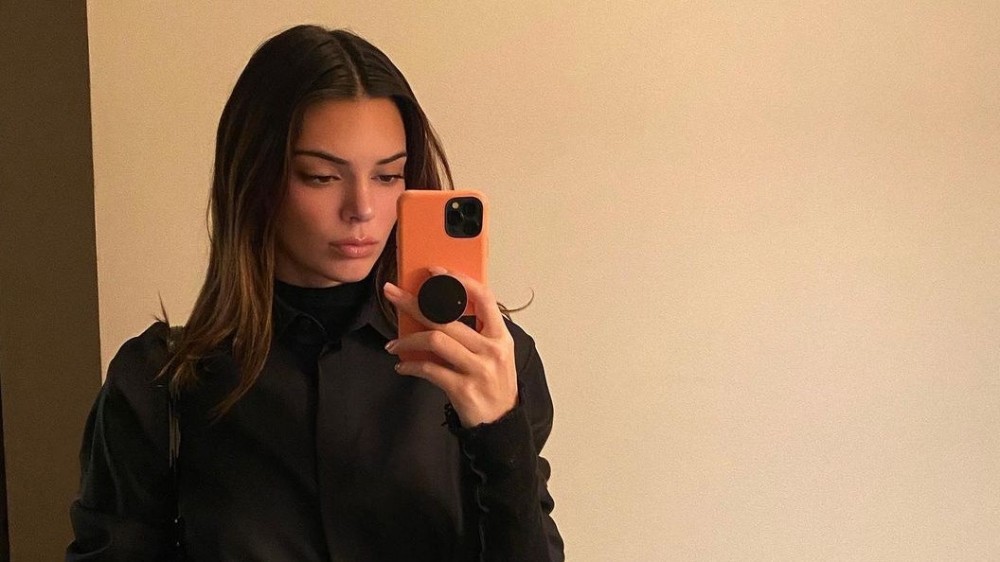 Yesterday, Kendall Jenner wore a black turtleneck, a black collared shirt, black high-waisted pants, and a slick leather belt that was also, you guessed it, black. None of this would be particularly notable if Jenner had not captioned her mirror selfie Instagram post, “The Row head to toe.” Those pants are specifically “Caylan cotton-corduroy wide-leg pants,” according to Net-a-Porter, while the shirt boasts the description “Big Sisea wool and silk-blend poplin shirt.” Lofty! Save for a snood, Jenner was wearing look three from the fall 2020 collection and signaling a new fashion era for herself.

Jenner evoked a ’90s-era Calvin Klein look with those long and languid boyish silhouettes favored by the likes of Carolyn Bessette then, and archival Instagram accounts now. It was a slick and sophisticated moment for Jenner, who mostly spent this past summer in bikinis and hiking spandex. The curious detail here is that Jenner never tags who she is wearing unless it is for a look book à la Matthew Williams for Givenchy or, well #ad content, which legally has to be marked as such according to the Advertising Standards Authority. In this instance, the shout-out of the label in her Instagram caption shows that Ms. Jenner wants the world to know that she is wearing The Row, a brand known for its quiet über-luxury appeal and adored by fashion editors.

After all, The Row does not have the same mass, buzzy draw of a larger-than-life house like Louis Vuitton, whose monogram has become a commercial force, or even the fervent hype that comes with Jean Paul Gaultier’s instantly recognizable archives. But the label, founded by Mary-Kate and Ashley Olsen, does have a rabid cult following. Those truly in the know understand that those pants aren’t just pants and that the shirt isn’t just a shirt. It’s about quiet luxury but with artful tailoring and deep attention to quality. Would the world have known that Jenner was wearing The Row if she didn’t include the tag? Probably only a very select few. The Row doesn’t have a logo on the exterior, so it takes a refined eye to notice that it is indeed from the label. As my friend, a fanatic of The Row, wrote to me: “I wouldn’t have really known it was The Row if she wasn’t wearing the majority of the full runway look.”

Other outfits Jenner has worn in the past few days continue the same artfully tailored vein. This afternoon, Jenner stepped out in a loose, optic white look composed of a soft-looking sweater, white button-up, and pants with a sharp pleat. It was polished. This jolt of sophistication is especially fascinating to see when Jenner is next to her modeling contemporary and friend Bella Hadid. The morning of Jenner’s “The Row” Instagram, she went with Hadid to The Met. Jenner opted for a long camel coat by Max Mara, a white turtleneck, black pants, and Nikes. Hadid went the bohemian route with a tiny Afghan jacket and a barely buttoned cardigan and cropped T-shirt that showed off her midriff. Hadid’s outfit felt fun. After all, she is a bona fide clotheshorse whose looks are meant to make a bombastic impact and have us looking up what exactly she is wearing. She also drives sales for these smaller designers and vintage pieces that are relatively accessible to her fans. Jenner’s approach is softer, elegant, and now far more expensive. I doubt that Jenner’s 142 million Instagram fans will be clamoring to snap up a pair of those understated black pants by The Row priced at $720. (Though, you never know.) It also appears that she’s now being styled by Dani Michelle, who works with Kourtney Kardashian on her refined, vintage-filled look. That’s another clue that we’re about to see a new style for Jenner.

Ultimately, this is a break from the “dressing for the ’gram” style that the Kardashians are known for. (Even though she did post the picture!) Aside from the label, it doesn’t have that catchy viral appeal of something like a Marine Serre monogram or a tiny Jacquemus bag. But that’s what these elevated and subdued brands with astronomical price points like The Row are known for. I’m curious to see where Jenner will go after dipping her toe into the world of The Row. Maybe some old Celine? Some Loro Piana? The world is her oyster, and there’s plenty of cable-knit cashmere in it too.