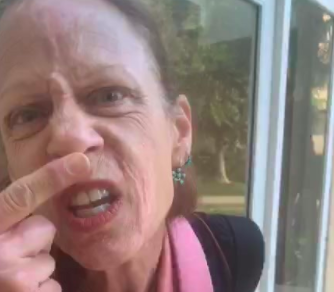 in Los Angeles is being dragged online after a video of her attempting to stop a Black man from doing his job has gone viral.

On Wednesday (Jul 22), Jordan Gipson took to Instagram to upload a video of the he had with an unidentified with the video starting with the e asking why Gipson is wearing “that green thing,” referring to his protective face covering.

“I have food I have to deliver to somebody ma’am,” Gipson explains, to which the woman replies, “Don’t deliver anything here. We don’t want you delivering. I don’t want you here.”

‘Is this a hold up or something?’ 🤦🏾‍♂️ #fuckkaren

Although Gipson initially uploaded a snippet of his encounter, he later uploaded the full almost five-minute encounter which revealed how far the elderly woman went to interrupt him from doing his job, blocking the man from the door as he attempts to speak with the customer through the building’s call box.

“So you’re not gonna let me in to deliver this food? I have the number,” Gipson says calmly as he waits to be buzzed in. “I have food I have to deliver to somebody, ma’am.”

While the exchange ultimately ends with the customer, who is only referred to as “Paul”, coming to retrieve his order, Gipson says that the decision to record the encounter was for his protection in case the “Karen” wanted to call the police.

In an exclusive statement to The Grio, Gipson stated that he never intended to go viral, but appreciates the outpouring of support.

“I didn’t originally post for attention/ a Karen video. I posted the story in fear of being arrested had she called police. At the time, I felt pretty normal being that I’m a Black man and I’ve grown numb to it,” Gipson said. “The support pouring out has made me understand that more and more people are condemning this behavior and I’m glad to be a part of that journey. Thank you.”

Since the viral video hit the web, Postmates issued a statement regarding the incident saying that their company has “zero tolerance for racism and is committed to the safety of everyone using our platform: couriers, businesses, and customers.”

Check out the insane video below.