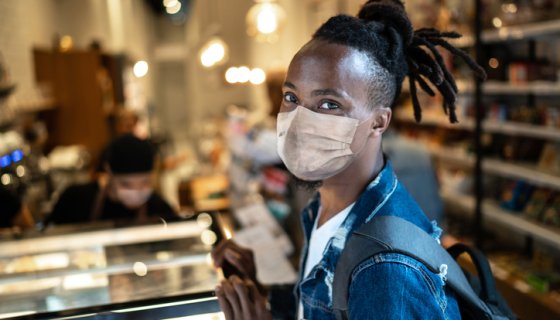 A Black business owner was forced to pull herself together after being over her store’s mask policy.

According to a local publication, ALX Now, Abyssinia Market & Coffee House, a Black-owned Virginia based coffee shop was vandalized and the owner, Lily Damtew, was spat on after asking a , a new policy Damtew enforced upon the reopening of her store.

“Right after they left, another guy came in not wearing a mask,” said Damtew, who was also wearing a face shield at the time. “I told him that we have a sign on the door saying, ‘Please wear a mask,’ but he said, ‘No, I don’t have to wear a mask.’”

It was at that point Damtew offered the man a mask to comply with Alexandria city officials who issued an executive order requiring anyone over 10 to wear face coverings in public buildings, it was at this point the began acting immaturely by putting a mask over his eyes before wandering blindly through the store causing a scene and knocking down merchandise.

“Is this okay,” the man reportedly asked while acting blind and knocking things down.

Damtew states despite the volatile display she stood firmly on the policy and that is when things began to escalate.

“I told him I have a lot of seniors as customers, young kids, and I have a family at home,” Damtew said. “I don’t want to put them at risk. I told him, ‘It’s my business, and I have a right to ask you to leave, the right to refuse service.’ He went on and on about why it’s not necessary with ‘you people’ this ‘you people’ that. I was scared.”

After his refusal, Damtew states that she asked the man to leave and it was then that he spat on her feet before calling her out of her name.

“He spat on my feet and called me another B-word and F-word,” Damtew said.

The Ethiopian immigrant states that it was at this point that she called the police, who advised her to lock up her store to prevent any further incidents but Damtew states that the unidentified man came back to her establishment with a bowl of food that he threw on her windows and outside tables.

“This guy came back with a bowl with some kind of food or something,” Damtew said. “He threw everything on my window and the tables outside. I’m pressing charges. He shouldn’t have spit and he shouldn’t have gone back and vandalized property. We tried to bleach it but we still have stains on the ground.”

Police did arrest the man although the specific charges or his identity haven’t been revealed, Damtew states that the incident has made her rethink reopening so soon, resulting in her shop remaining closed for now.

Since the incident, Damtew said she’s been humbled by some of the support from her friends and neighbors.