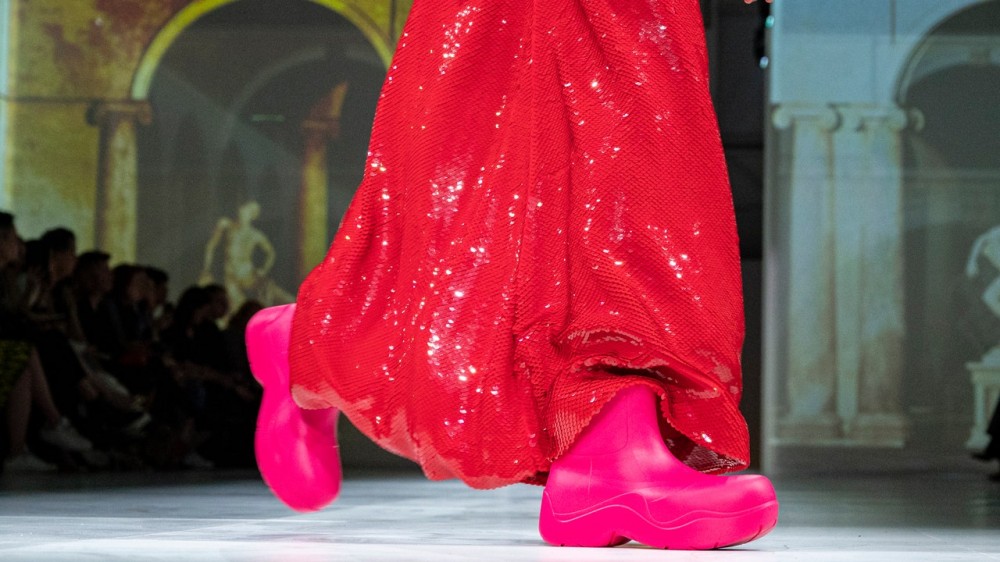 Numbers don’t always tell a complete story, but at the end of each year, we’re always curious to see which fashion items got the most clicks or highest spikes in search volume. Forget the runways; what did people actually buy and wear? More often than not, the “must haves” can be explained by major headlines or moments in pop culture. But in 2020, a year marked by a global health crisis, staggering unemployment, and a contentious election, what we liked and bought arguably meant even more. If we purchased anything new, it was likely comfortable—loungewear remains the best-selling category on the market—or sent a message about our beliefs.

Over the past few days, we’ve narrowed down 17 of the year’s most-wanted accessories, shoes, sweatshirts, and more. In some cases, we looked to data—see: Harry Styles’s TikTok sweater—while others came from our own observations, like Bottega Veneta’s oddly uplifting rainboots. Scroll through them all below.

The Bushwick Birkin, as it’s come to be known, isn’t new. Telfar Clemens started making his vegan “shopping bag” totes in 2014, and while they’ve always been hard to get, the obsession reached a fever pitch in 2020. A surprise restock in July reportedly sold out in seconds, and the resulting frenzy became almost as newsworthy as the base themselves. The bag got another boost when congresswoman Alexandria Ocasio-Cortez wore it on Capitol Hill; according to Lyst, searches for Telfar spiked 163% the following week. GQ called it “fashion diplomacy done right,” and pointed out how Telfar’s slogan, “not for you—for everyone” jibes nicely with AOC’s own beliefs.

We’ve learned to expect great fashion choices from former first lady Michelle Obama, and this year was no different. At the virtual Democratic National Convention, she paired a chocolate-brown top by Nanushka (a Gen-Z favorite) with a delicate gold necklace spelling out a single word: VOTE. It was designed by Chari Cuthbert, a Jamaican designer based in Los Angeles, and it retails on her site for $295. The election is (finally!) over, but women are still ordering it. We won’t have to show up to vote again for a while, but wearing the necklace is a big endorsement for Cuthbert’s small, woman-owned business.

The term viral is used too loosely these days, but it’s an apt description for Hill House Home’s nap dress. Nell Diamond, the brand’s founder, added the cheekily-named frock to her assortment of bed linens and towels last year. But when the pandemic forced us inside, the concept—a dress you wear to take a nap, or just to hang around the house—felt prescient. They became Instagram trophy pieces, partly thanks to their friendly prices—the dress starts at $125—and partly because of their influencer fans. When Diamond restocked her Nap Dress (which now comes in a range of prints, colors, and silhouettes) in late October, she sold $1 million within hours.

Nine months into the pandemic, a girl still can’t get her hands on a pink Entireworld sweatshirt. Scott Sternberg’s sweatsuit label has become the industry’s de-facto “2020 success story” since April, when his website saw its highest-grossing day ever while other brands struggled to make any sales at all. He’s described his candy-colored joggers and crewnecks as “clothes to live in,” and as #WFH has evolved from a passing trend to our lived reality, that rings true now more than ever. As we “re-emerge” for outdoor dining, we’re seeing women style their sweats with non-loungewear, from oversized blazers to loafers. “Sweatpants forever,” indeed.

Following the debut of Beyoncé’s Black Is King film, many of the designers she and her backup dancers wore saw triple-digit spikes in search traffic. Marine Serre’s signature crescent moon body stocking got a particular boost: According to Lyst, it became the most popular design of the year, with searches spiking 426% in the 48 hours after the film’s release. Like a few other items on this list—the Telfar tote, the Nap Dress, Birkenstocks—it isn’t exorbitantly expensive. Serre’s long-sleeved beige top is $290. Considering you can layer it under dresses, sweaters, blazers, and just about anything else in your closet, the cost per wear will end up being pretty low.

According to Lyst, the top-trending item of 2020 was a black-and-white logo mask from Off-White. But the ones we saw the most—at least here in NYC—were Resistance by Design’s “VOTE” masks. Created by Alex Posen, formerly the CEO of her brother Zac’s ready-to-wear label, and her friend Dahna Goldstein, the “VOTE” masks have been worn by influential women including Hillary Clinton, Dr. Jill Biden, and Stacey Abrams. They made a blunt statement IRL and on Instagram at a time when many of us couldn’t gather to discuss the issues. In the lead-up to the election, the brand reportedly sold “tens of thousands” of them; their success is even sweeter in light of how the election turned out.

It’s hard to recall when people weren’t wearing Birkenstock Arizonas. Influential women like Phoebe Philo and Ashley and Mary-Kate Olsen gave them fashion cred in the early 2010s, but it was 2020 that made the ugly-chic shoe an actual must-have (particularly for those of us in walking cities like New York). Lyst put the chunky two-strap sandal at #2 on its list of the top 10 most-wanted items of the year, with a nod to Proenza Schouler, Valentino, and Rick Owens, who have all collaborated with the German shoemaker. Still, you’re more likely to see people on the street wearing the brand’s classic two strap sandals in black leather or ultra-light EVA foam. The Arizonas on every Vogue editor’s list? Fluffy wool shearling in black or mink.

If your jewelry didn’t get a lot of play this year, perhaps you picked up a new accessory: Bala bangles. The hands-free wrist and ankle weights were sold-out all summer long with at-home workouts replacing our trips to the gym. They’re particularly well-suited to pilates, barre, or cardio-sculpt classes like Tracy Anderson Method or The Sculpt Society. Function aside, something about the sleek bands and bold colors made women covet them like any designer bag or legging. Word to the wise: They’re back in stock now if you’re still stumped on a gift for your fitness-obsessed friend.

Beyoncé, Dua Lipa, Miley Cyrus, Kim Kardashian West—those are just a few of the uber-influential women who have worn Mugler’s sheer bodysuit. This isn’t your average shapewear: The brand’s creative director Casey Cadwallader told British Vogue he’s been developing the design since he joined the house back in 2017. Comprising 64 panels, it’s a couture piece most women couldn’t justify for daily use (ditto Lipa’s crystal-embellished version), but its popularity is likely to inspire more Mugler and Mugler-like bodysuits, base layers, and lingerie in 2021.

Birks aside, the most-wanted designer shoes of the year were easily Bottega Veneta’s bulbous rubber Puddle Boots. They were a constant on our Instagram feeds, beloved by editors and Danish influencers alike, and came in a range of happy, impractical colors, from kiwi to lollipop pink. Daniel Lee showed them with fringed gowns on the runway in February, but they became newly relevant in light of the tumult we faced this year. Weatherproof and nearly indestructible, they’ll get you through anything.

Christopher Kane’s fall 2018 show included a few dresses printed with sketches from the book The Joy of Sex, plus a new slogan: “More Joy.” Two years later, Kane has developed a full line of subtly subversive iPhone cases, pins, blankets, face masks, sex accessories, and underwear stamped with “more joy” (as well as “sex” and “special”), and we’ve been seeing them everywhere. In a pretty joy-less year, the concept feels newly meaningful; each item serves as a tiny reminder. Also very 2020: Kane’s “More Joy” face mask was the first fashion mask made with an antiviral fabric.

Harry Styles was the man of the year—literally. Lyst named him the #1 most influential celebrity on its report, up from #9 in 2019. But even before his December Vogue cover went viral, Styles was inspiring fashion purchases—and even some DIYs. When he wore a JW Anderson colorblock cardigan during a Today Show rehearsal, the $1,479 sweater sparked an interesting TikTok trend: Crochet enthusiasts were making their own versions of the sweater, with some videos amassing hundreds of thousands of views. Anderson encouraged the fun by sharing the original pattern on his website, telling Vogue Business: “I quite like that we designed something that has taken on a new type of meaning, a new life. And I think that’s important for fashion today; to be about inclusion, not exclusion.”

On the still-quiet streets of Soho, the Dior Men shop is the one of the very few with a line out the door. Young men and women are willing to wait hours for Kim Jones’s couture-meets-streetwear trophies, “Air Dior” sneaker collaboration with Nike especially. Worn by the likes of Travis Scott, the gray Jordans with a logo’d swoosh are now fetching resale prices upwards of $8,000. For those who couldn’t get their hands on a pair, classic Nike Air Jordans (which retail for closer to $150) were trending this year, too; The RealReal chalked it up to the success and influence of The Last Dance.

Our approach to PPE has changed dramatically since March, from wearing no masks at all to splurging on $1,000 face shields. Louis Vuitton’s monogrammed plastic shield is one of the more over-the-top items on our list, but you can’t say it isn’t functional. It may just be the thing that defines 2020 fashion the most. A face mask (or shield) has become the accessory we can’t leave home without, and it makes sense that luxury brands would create their own versions. As we prepare for a second wave here in New York, it’s fair to expect more clever mask and shield designs in 2021.

Kamala Harris’s fashion choices weren’t widely discussed this election cycle, intentionally so. But there were a few constants you couldn’t help but notice in her wardrobe, including a pearl Irene Neuwirth necklace and classic Converse All-Star sneakers. They were a relatable choice in a year where glamour simply wasn’t a priority for most women, and as my colleague Laird Borrelli-Persson wrote, Harris’s grounded sneakers sent a subtle message: “The vice-presidential candidate is a woman willing to do the leg work to propel positive change.” Converse was unable to comment on Harris’s influence on sales or site traffic, but let’s just say they’ve never looked more appealing to us.

Winter is just setting in here in New York, so it’s too soon to declare the coat of the year. Chances are there will be a few contenders, but we’re betting on one in particular: The North Face’s 1996 Retro puffer. It’s been spotted on celebrities (like Emily Ratajkowski, above) and in Vogue’s street style coverage, but beyond popularity, what it really has going for it is serious warmth. You’ll need a good coat for your socially-distanced walks this winter, even better if it’s one you’re excited to wear.

Khaite’s plush, oatmeal-colored cardigan and bra technically went viral last fall when Katie Holmes wore the cozy set to hail a cab. But 2020 was the year the look went mainstream. We’re seeing copycats and dupes everywhere, and despite restocks on khaite.com, it’s still pretty difficult to get your hands on the original sweater and bra (despite the luxury price tag—both items will cost you just over $2,000). In our era of #WFH and staying in, the set was predestined to become the ne plus ultra in chic, non-sloppy loungewear. For those of us looking at six more months of working in our cramped apartments, it might just be worth the splurge.