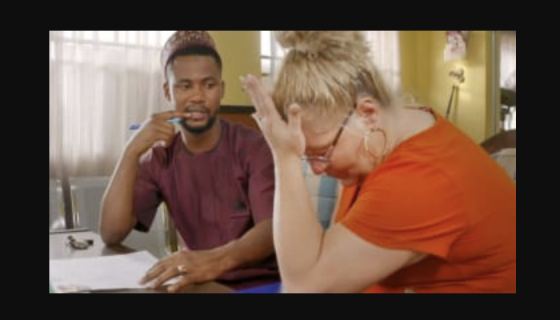 Fans of TLC’s hit show, 90 Day Fiance, are angry after admitted to calling her Nigerian husband the .

On Tuesday (May 19) Lisa Hamme took to Instagram Live to address accusations that she used against her husband Usman Umar, an aspiring rapper who goes by the name Sojaboy, during an argument.

The exchange was revealed when the two appeared online to do an interview about their experience and marriage, it was then that Umar revealed what Hamme called him but not before she tried to threaten him from speaking out.

“I just want to know..” Umar started his statement

“If you open these can of worms and I start getting hate mail, you and I are going to have a problem,” Hamme said looking angrily into the camera.

Her threat fell on deaf ears as Usman Umar began speaking out about the Hamme used towards him.

“I just want to ask American women if calling me a n*gger is something that you all practice because she said it to me,” Umar continued. “She called me a n*gger and although I didn’t respond angrily because it’s something I am used to hearing from people who look like her, it’s still inexcusable.”

Hamme took to Instagram with her own live to try to explain her side of the incident calling out both fans and naysayers before overall threatening to remove herself from social media altogether.

“It is said if you sin and you apologize and you pray for forgiveness, it is forgiven. So, my husband and I, it is a private manner between him and I. Because they are not going to drop it and it’s sad. Because the world needs to be united. We are human beings,” Hamme said.  “It just bothers me that there are so many hateful people in the world. We have people dying every day. I made the mistake of saying the N-word. I apologized several times. But you still want to come at me. This is something between my husband and I. But I’m here to take your abuse.”

Check out her response below.