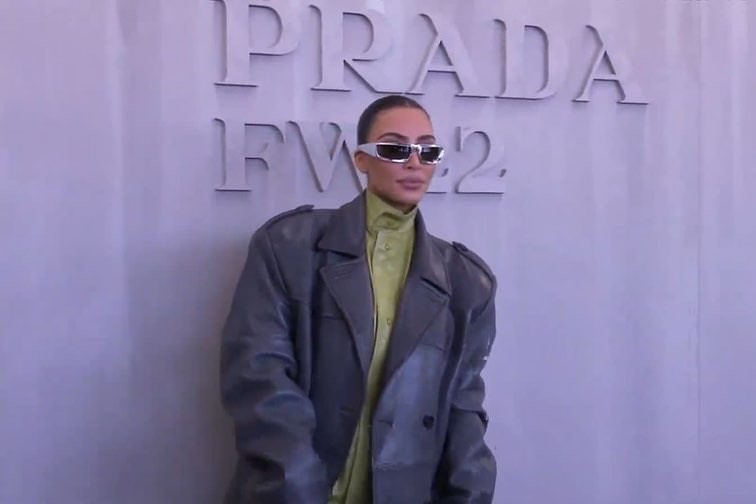 Having spent the best part of a year shrouded in Balenciaga, Kimberley has now scampered into the arms of Miuccia Prada

It was less than a month ago that Kim Kardashian was made an official Balenciaga girl, posing for the label’s SS22 campaign after giving Demna creative control of her entire wardrobe, divorce, and by proxy, public persona, for the last six months. But, having risen to the top of one maison, the entrepreneur has now changed tack, scampering into the arms (and frow) of Miuccia Prada and Raf Simons.

That AW22 should prove Kimberley’s first Prada outing was symbolic. Today’s show was advertised as a “history of women” and over recent years there is perhaps no other individual who has shaped the contemporary vision of womanhood more than Kim Kardashian – dressed by Mrs P in a wipe-clean, butterscotch boiler suit taken from the brand’s recent men’s offering and, later, a mammoth grey trench and lime green suit, which looked as though they had been forged from an old leather car seat.

The collection went beyond the idea of a female monolith, though – casting a now-ginger Kendall Jenner, house favourites Anok Yai, Rianne Van Rompaey, Kaia Gerber, Emily Sandberg, and Mica Argañaraz – with the clothes running the gamut of modern femininity. This idea was no better exemplified than with the Prada singlet, an item of clothing so closely associated with sweaty barber shops and old-school gangsters that it almost feels performative. Cue a swaggering, slick-haired Hunter Schafer closing the show. As Depeche Mode ricocheted through the brand’s AW22 intergalactic set, hulking blazers were offset with wispy, diaphanous skirts, clavicle-bearing butch coats came with chained necklaces, as leather mini skirts distended into into cobweb knits and rib-knit layers.