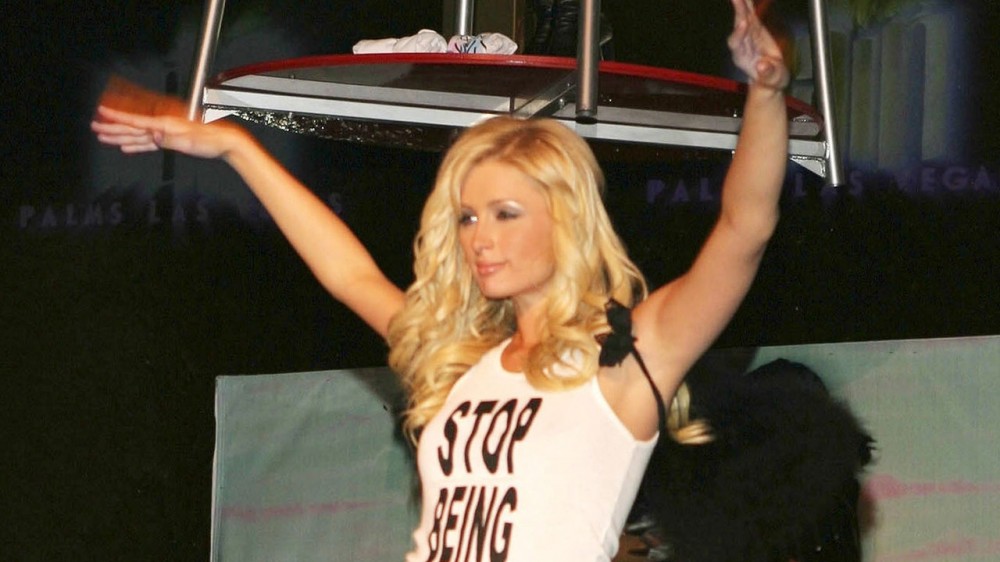 You’ve likely seen the image of Paris Hilton wearing a shirt that says “Stop Being Poor.” It’s always been a cheeky analogy for the excess of the early ’00s: Here is Hilton, credit card–swiping heiress-socialite, known for all of those trips to Kitson and hauling Louis Vuitton monogrammed bags, telling the world to just stop being poor. But it never existed. Today, Hilton took to Instagram Reels to set the record straight. In classic Paris form, complete with a crown emoji, her caption reads: “Debunking the #STOPBEINGPOOR myth. 🙅🏼‍♀️😹 Don’t believe everything you read. 😏 #Iconic 👑” In the clip, she says, “I never wore that shirt. This was completely photoshopped. Everyone thinks this is real.” Then, Hilton reveals a picture of her and her sister Nicky, in which the actual shirt reads “Stop Being Desperate.” The design was actually from the 2005 launch of Nicky’s line Chick.

Hilton’s reveal comes as she has been reclaiming her image during the past several months. In September 2020, she released the raw documentary This Is Paris about the abuse she suffered at a boarding school for troubled teens that focused on behavior and mental health. She’s also joining celebs like Emily Ratajkowski in taking more control of the media surrounding them. In late April, Ratajkowski listed an NFT version of a photograph herself at Christie’s that had previously been appropriated and sold by Richard Prince for $90,000 as a piece of art. In doing so, Ratajkwoski symbolically takes back an image and gives a voice to a situation that she once didn’t have control over.

On a lighter note, if you thought that “Stop Being Poor” shirt was real, don’t feel too bad. It’s quite believable, given Hilton’s track record of wearing brash and bold statements on her chest, like famously sporting a pink shirt that read “That’s Hot” on the front and “You’re Not” on the back. After all, Hilton has always been known for her extreme noughties looks, which included all things midriff-showing, slinky, and of course, that steady rotation of Juicy tracksuits, which she still wears today—a look that truly can never be disputed.