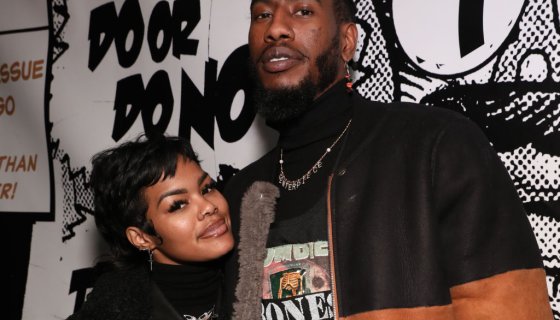 and have announced that their family is growing.

On Friday (Jun 12), released the video for her latest single, “Wake Up Love” a collaboration track featuring her NBA star husband Iman Shumpert. Directed by Taylor and frequent collaborator Rafael Gutierrez serving as director of photography, the visual for her latest release features the happy couple and daughter Junie happily jumping into bed. As Junie excitedly pushes Iman’s hand away from Teyana, the plush white comforter sweeps back revealing Teyana’s baby bump, breaking the news that the couple is expecting another daughter.

Though , who also raps a verse on “Wake Up Love,” have a lot of names in mind for their baby girl on the way, Taylor says Junie “keeps changing it.”

“Junie has a lot of ideas,” she says with a laugh. “We want to keep her as involved as possible because Junie clearly thinks that this is her baby. She talks to my stomach all the time. It’s so good to see that.”

The proud soon-to-be mother of two also gushed that her cameo in the video is actually a glimpse of how-year-old  Junie has taken on the role of big sister.

“What she did at the end of the video is Junie the whole time,” Teyana continued. “She hogs the whole baby all the time. We were in the bed and loving on one another, and she jumped on the both of us like, ‘I’m here!’ It’s the cutest thing. Kids handle siblings differently. You have kids that are a little bit jealous. But she’s so excited and preparing herself to be a big sister. She constantly kisses my stomach, she constantly talks to the baby. Even when we go to the store, she’s like, ‘Okay, mom, this is for the baby.’ She’s so ready. She’s going to be such a great big sister.”

The single, which serves as the third release off of her upcoming project, THE ALBUM. In recent weeks, Taylor’s dropped two videos from the release, her third album. “Made It” celebrates graduates from the Class of 2020, while “Bare Wit Me” pairs up Taylor’s choreography and a 1930s noir murder mystery.

Check out the video for “Wake Up Love” below.