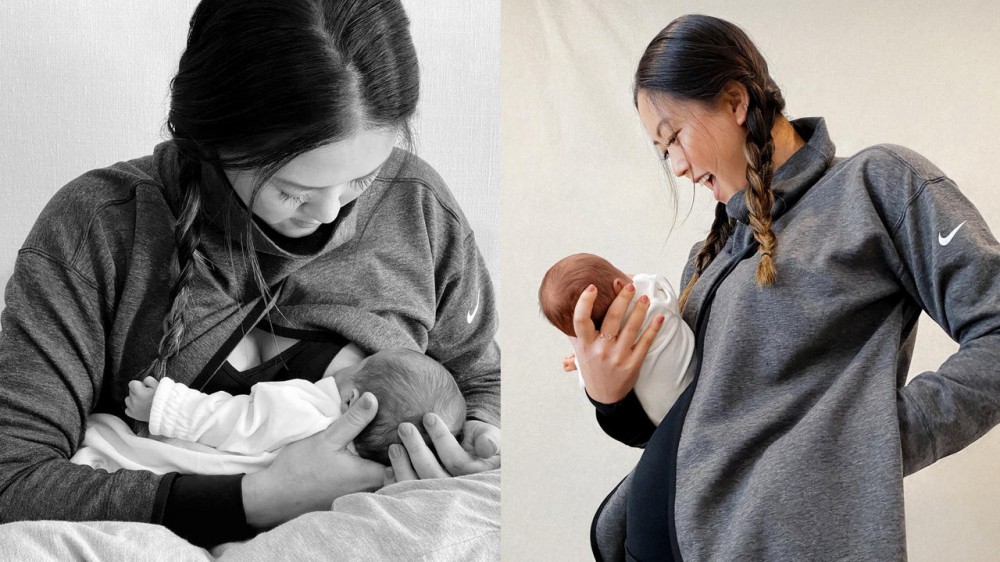 My baby had just stopped crying. My mother and I had just called a ceasefire on one of our daily arguments, centered around the division of power over the baby and kitchen. (If you have ever had your mother temporarily move in to help you with a newborn, you know.) Exhausted and emotionally depleted, I decided to go on a run, my first attempt at cardio exercise since I had given birth to my daughter four weeks earlier.

I squeezed into my pre-pregnancy leggings and sports bra and turned on my Nike Run Club app, still frozen on the last run I had attempted on the West Side Highway in the sixth month of my pregnancy, before realizing that my protruding belly had graduated from mere nuisance to liability. I stretched. I pushed off, took a few strides, and then stopped. What were these enormous sandbags attached to my chest? Ah, yes, they were my new breasts, which, after weeks of supply-related stress, had finally filled up with enough milk to accommodate my daughter’s hefty demands. My old sports bra flattened them down to form two matching pancakes, while my leggings squeezed my postpartum belly jiggle over the top of the waistband, creating an effect resembling that of an overflowing ice cream cone. My clothes were against me, my body was against me—hell, at that moment, it felt like the whole world was against me.

As I ran through my new Los Angeles neighborhood, I vaguely wondered if the tears streaming down my face were the result of hormones, exhaustion, or self-pity. (Or, maybe, a mixture of all three.) When I got home, my daughter had woken up and was demanding to be fed immediately. I had no choice but to pull the sports bra up above my chest, thereby cutting off my blood circulation for a good 40 minutes while we played our usual game of pull-and-latch. This was my official introduction to postpartum fitness.

By the time a box of Nike (M) workout gear arrived at my doorstep two weeks later, my running skills had advanced. My mother had gone back home, and I had quickly come to realize that working out with a baby and no help meant spending the majority of your day in your workout clothes. To be precise, it looks somewhat like this: you leave the baby with your partner (who may or may not be on a Zoom call), you run, you return home and do a chore, you feed the baby, you do another chore, you put the baby down for a nap, you do yet another chore, and then maybe—maybe—you top it off with a quick minute Melissa Wood Health flow or Jillian Michaels circuit to “complete” the workout. (Don’t ask me when you shower. You don’t.) I had also come to realize that working out postpartum was even more challenging than I had anticipated: on one hand, you need to be gentle with your still-recovering body; on the other, you need to push yourself—really push yourself—just to complete a two-mile run. Throw in some sleep deprivation and hormonal changes, and each workout feels like a triathlon.

The genies over at Nike may have known about this. After all, their design team had spent three years carefully researching the nuances of the pregnancy journey, using a combination of pregnancy data findings, analytics from over 150,000 body scans of pregnant and non-pregnant women, and feedback from 30 female athletes who were either pregnant or postpartum. The result is the four-piece Nike (M) capsule collection, consisting of leggings, a tank, bra, and sweatshirt that are meant to adapt to each stage of your body during pregnancy and postpartum. The line is introduced through a video called The Toughest Athlete, starring athletes such as Serena Williams and Alex Morgan. In under one minute, it manages to rightfully showcase mothers as the ultimate warriors, thereby adding that kick of empowerment that makes Nike the fitness titan that it is. But, back to the clothes, which I had the pleasure of trying for myself. Here are some of my observations.

One of the side effects of being pregnant is that you become somewhat of a leggings connoisseur, capable of identifying a good pair just by looking at it. The Nike (M) leggings are a good pair—so much so, in fact, that I immediately regretted not having discovered them during my pregnancy, when my ankles resembled marshmallows and each movement felt like an endurance test. The high waistband is soft and supple, perfect for supporting a bump, yet surprisingly good at holding in the loose bits during the “Fourth Trimester.” The fabric is thin and soft and, after a month of compression tights, feels like a hug from the postpartum gods

themselves. In the days after receiving these leggings, I found myself reaching for them immediately after waking up and removing them only for my aforementioned shower. While I did occasionally run in them, I found them to be better suited for low impact and endurance workouts, or just for surviving the day while feeling like a semi-together human. Oh, they also received a “Nice spandex!” compliment from my fiancé (who was clearly raised in the ’80s), which didn’t hurt.

Here’s the thing about your breasts while nursing: they don’t just quadruple and hurt and need more support than Atlas himself can provide. They also have to be accessible at all times, readily available to be whipped out in a flash upon your baby’s demand. You usually have no time to do something as inconsequential as wash off beforehand, which means that your bra needs to be a state-of-the-art genie capable of doing the work for you. The Nike (M) bra doesn’t just do the work, it multitasks. It supports your breasts during workouts—perhaps, not as well as I would have liked it to, but well enough to avoid having to stop and tuck in your breasts

after each burpee. It features a special moisture-management fabric that miraculously eliminates sweat, and little slits that allow your baby to latch on while still concealing most of your breast. It does a great job holding in the flanges of my Medela hospital-grade monster pump, which certainly doesn’t hurt. Oh, and it also makes my boobs look fantastic, for extra credit.

Designed with a belly in mind, this tank is yet another one of those Nike wonders that somehow adapts seamlessly to your postpartum frame. It is slightly longer and thicker than the average fitness tank, which is helpful for holding together the notorious post-baby jiggle. It is stretchy and can be pulled down for easy nursing. Granted, it can probably be replaced by any other shirt, making it less imperative to one’s fitness routine than the other two pieces. However, it feels supportive and stable and just right. And, at a time when your life consists mainly of moving pieces, maybe that’s reason enough?

Having recently concluded my “Fourth Trimester,” I feel more powerful in my body than ever before. This has little to do with how I look (although I’m certainly not above the thrill of seeing tangible results), and everything to do with what I have witnessed my body accomplish over the past year: carry a child, give birth to a child, come back together in one piece. This also has little to do with my specialized workout gear—I’m fairly certain I would have gotten there in old leggings and a sized-up sports bra. But I’m happy that I didn’t have to. I don’t know if it’s psychosomatic or whether I’m just a prime target of effective marketing, but there was something about having a designated fitness arsenal that made each workout feel better, each stride of my run feel longer, each song sound more inspiring.

Just like motherhood itself, taking care of one’s body is an infinite process. There is no finish line; you just have to get up every morning and do it, time and time again, with as much energy and enthusiasm as you can muster. And, just like with motherhood, you can use all the help you can get.