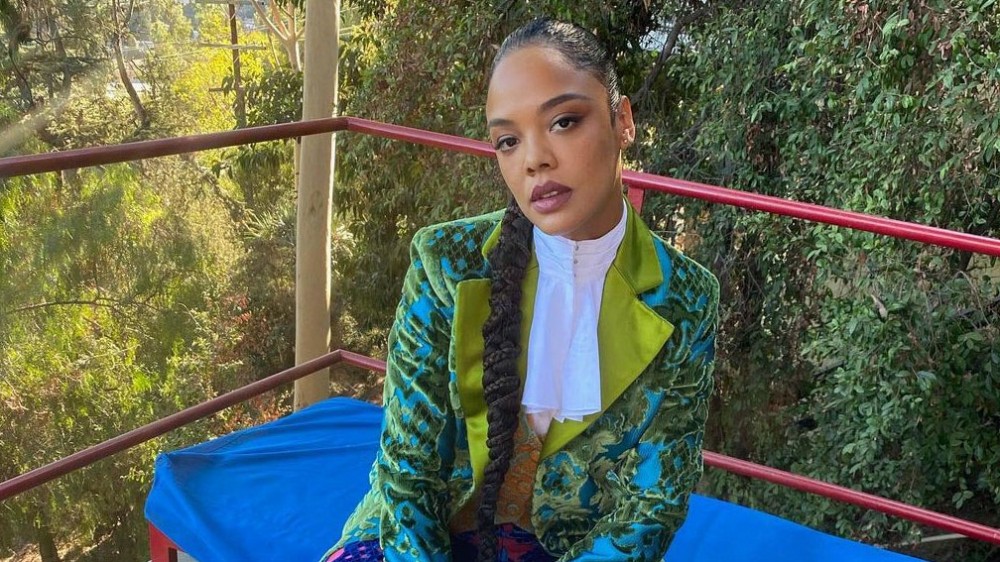 With the holidays fast approaching, the loungewear look that has defined 2020 suddenly seems less than compelling. In a year focused on sweats, yoga pants, and the return of the velour tracksuit, at-home outfits that break from the cozy formula feel close to revolutionary. As one of Hollywood’s most daring fashion stars, Tessa Thompson is used to taking outfits others consider outlandish and making them feel like a second skin. Currently doing virtual promotion for her upcoming romantic drama Sylvie’s Love, Thompson has been testing out impressive runway pieces in the Zoom meetings, conference calls, and chat sessions that now constitute a press tour. After hanging out in Marine Serre last week (and instantly earning herself a spot on the best-dressed list in the process), Thompson switched gears yesterday with a piece from Jeremy Scott’s fall/winter 2020 Moschino collection. On anyone else, an ombré velvet brocade suit with ruffled cravat and bell sleeves would be overwhelming, especially when worn with a mile-long braided ponytail and spiky manicure, but Thompson pulled it off with ease. More than that, she gave the world a healthy dose of psychedelic style when it needs it most.

Thompson and her stylists, Wayman Bannerman and Micah McDonald, consistently select statement pieces, but in the absence of traditional red carpets and photo ops, their style choices have taken on a new verve. The internet, with its love of attention-grabbing fashion, necessitates a degree of audacity, and Thompson delivered. Scott’s fall muse was Marie Antoinette, but on Thompson, the suit called to mind the distinctive wardrobes of rock gods like Prince and Jimi Hendrix. A welcome jolt of color and fun, the look made working from home seem downright groovy.