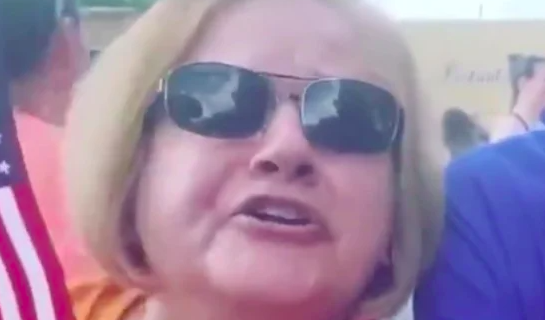 During the past few years for “” racist white folk have felt emboldened to show their But it seems like the recent Black Lives Matters demonstrations seemed to have .

The latest —and certainly not last—incident came this past Saturday (July 4th of course) when a middle-aged white woman was caught on video spewing a racist and homophobic rant while at counter-protesting a Black Lives Matter demonstration in Elizabethton, Tennessee. According to the Johnson City Press, Sonya Holt attended the counter-protest to bask in her white privilege and yell “white lives matter” and “white lives are better” at peaceful protesters calling for racial equality.

At one point Holt even told a protestor he’d “burn in hell” because he was gay before turning her attention to a Black woman who she yelled was “just a poor little Black girl with a messed up mind.”

Naturally, the video was shared on social media by 16-year-old Sierra Gilmer, an activist and board member of the New Generation Freedom Fighters, a group advocating for social justice. After garnering thousands of views and disgusting thousands of people, Sonya Holt was promptly fired from her job at a Johnson City vision company who wanted no parts of the backlash that would inevitably come with their former employee’s presence.

A spokesperson at the company acknowledged the woman in the video had been an employee but no longer worked there as of Monday morning. An employee who answered the phone declined to give a specific timeline, saying the business did not comment on personnel matters, only that Holt was no longer employed there.

Things got so hot for a second that rumors of her employment at the Carter County School System had to be shot down to keep anger at them at bay.

“It has come to our attention that a video has been widely circulated of a woman at the protest in Elizabethton on July 4th with people saying she is an employee of Carter County Schools. Please be informed that this person is not employed by the school district,” the statement said.

Maybe she can apply for a job at the White House. Lord knows they’re filling all kinds of positions with racists, bigots, and homophobes. Her firing could end up being a blessing in disguise. Just sayin.’

@karensgonewild_ Meet Sonya Holt, the East Tennessee Karen, the most inbred of the Karens! Video from the Elizabethton BLM protest yesterday. pic.twitter.com/ZuapcaHL94