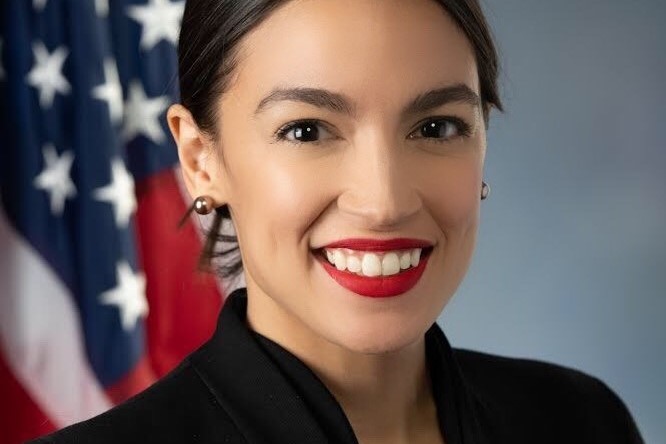 ‘Another NY-14 native using their talents to challenge us to question convention and imagine a different world. Our community is so proud!’ the politician wrote in a post

In further proof that Telfar Clemens is heading towards world domination, Alexandria Ocasio-Cortez just gave the designer a shout-out on her Instagram stories.

Reposting a photo of two young Telfar fans, tote bags in hand, the progressive, left-wing politician took the opportunity to dish out a ‘fun fact’ about the designer – telling her 6.1 million followers that Clemens got his start in Lefrak City, Queens. “That’s right! Telfar Clemens is a HOMETOWN HERO from our district!”

While Ocasio-Cortez famously grew up in the Bronx, the congresswoman now represents New York’s 14th district, which covers the Bronx, Rikers Island, and a portion of Queens – including Lefrak City. “Another NY-14 native using their talents to challenge us to question convention and imagine a different world. Our community is so proud!” she added to the post.

While Clemens might have been thrust into the spotlight in recent years, the Liberian-American designer has been working away on the label for the last 16 years, and is known for his own transgressive approach to fashion. Launching his genderless clothing long before most in fashion even considered the concept, the designer continues to push his message of inclusivity and representation, with the brand’s ethos of ‘not for you, for everyone’ still at its core, despite Clemens relatively recent upsurge in mainstream popularity.

Best known for his vegan leather logo totes – which have become nigh on impossible to get your hands on despite the label’s frequent restocks – this week Clemens took steps to stop resellers swiping all the goods by launching the Telfar Bag Security Program, which allowed all those looking to get their hands on one to pre-order as many as their hearts desired. Right now, we’re wondering if AOC was among them, given seeing the congresswoman walk into Washington’s Capitol Building, Telfar tote in hand, would be nothing short of a moment.

Ocasio-Cortez’s endorsement of Clemens comes just a few days after she got an enthusiastic endorsement of her own. Step in Cardi B, who Tweeted “She better run for president when she turns 35” after the politician posted a video of herself dancing to “Bodak Yellow”. “Women Against Patriarchy (WAP) 2020” the congresswoman responded, which doesn’t seem to rule the idea out, tbh. Roll on 2024.

See the post below and check out our feature on Why the Telfar bag is this decade’s most important accessory.