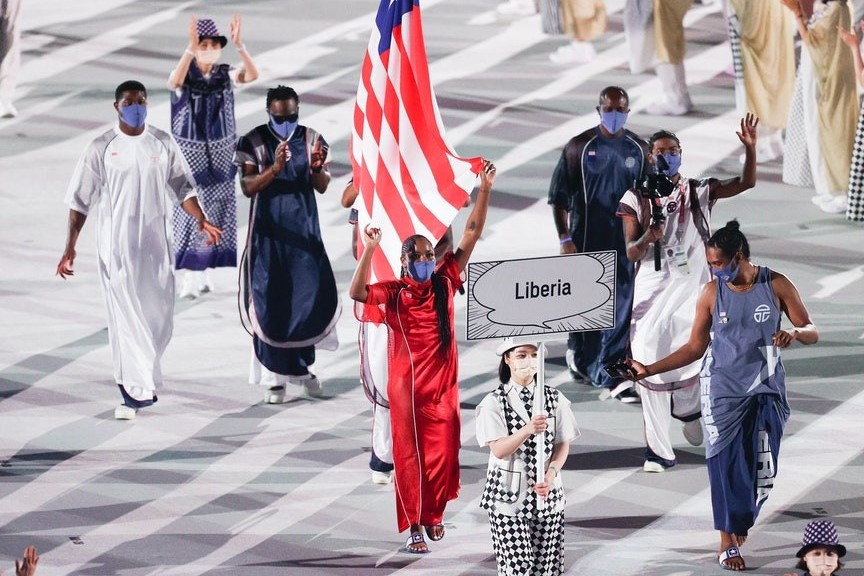 Just last month, Telfar was announced as the official sponsor of the Liberian team at the 2020 Olympic Games in Tokyo. Yesterday (July 23), Telfar Clemens himself joined the athletes at the Olympic opening ceremony (which doubled as his first presentation since Pitti Uomo in January 2020, before the pandemic).

A designer joining the delegation at the Olympics is pretty much unheard of, but then the collection itself isn’t your usual Olympics fare. Comprising around 70 genderless pieces — designed over the course of four months — it features takes on Telfar’s signature designs, including an asymmetrical, shoulder-baring running top, and tiny “what!” shorts.

“They said ‘go crazy’,” Clemens told The New York Times last month. “So I did.”

In true Telfar fashion, the Olympic collection is also set to be released to the public in an upcoming drop (because “it’s for everyone”, obviously). You’d better sign up for that mailing list though, because no doubt it’ll be snapped up as fast as the brand’s iconic Shopping Bags.

The collaboration is also a big deal for the Liberian team, which has attended the Olympics almost every year since 1956, but has never won a gold medal, and has gone without an official sponsor since 2000.

Emmanuel Matadi, the Liberian sprinter that initially reached out to Telfar, tells the Times that this is the first time he feels that the Liberian team is getting a similar opportunity to that of the US or Canadian teams. Ralph Lauren has sponsored the US team since 2008, with Kim Kardashian getting in on the act for 2021, while Hudson’s Bay has long outfitted the Candanian team (for better or worse).

The Telfar kit gives the athletes “a psychological boost,” Matadi adds. “If you feel like you look good, you perform well.”