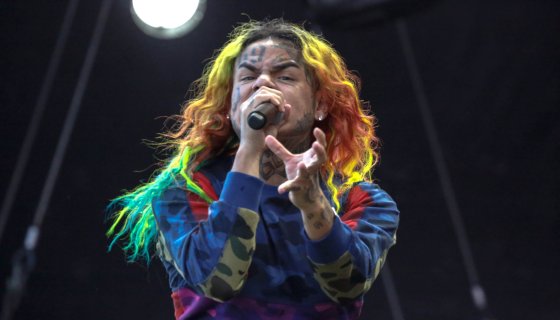 Looks like all that snitching done paved the way for to enjoy himself on the streets of New York without any fear of retaliation.

Yesterday (August 2) the government’s star informant celebrated the end of his home confinement by “triumphantly” returning to his old stomping grounds of Brooklyn with his crew in tow and security up the wazoo after spending the afternoon rolling around the city on a hot and humid day. According to Page Six the most hated man in Hip-Hop hit midtown Manhattan with his entourage as if there isn’t a bounty on his head and took in his newfound freedom while taking selfies with snitch adoring fans.

Afterwards hit made his way to Bed-Sty, Brooklyn in a fleet of exotic cars which will be featured in his next music video for “PUNANI” and eventually touched down in the borough that has a lot less real ones thanks to his “Henry Hill” ways. With a bunch of muscle rolling behind him, Tekashi strolled through the hood but from the look on his face you can tell he was a tad bit uneasy about returning to the hood.

You really have to wonder how much paper he’s putting in the pockets of those men to risk their lives and reputations to make sure Hip-Hop’s most infamous tattletell didn’t get his comeuppance in Kings County.

Peep Tekashi return to New York below and let us know how you feel about the situation as a whole in the comments.

IM FREE !! LINK IN BIO LINK IN BIO WHO SAID WE AINT OUTSIDEEEEEE 😈😈😈 PUNANI 🔥🔥🔥 BROOKLYN THIS MY TOWN NEW YORK THIS MY CITYYYY YOU HEAR ME!?!?! KING OF FUCKING NEW YORK YA COULD NEVA DO WHAT I DID AND BE OUTSIDE DUMMY!