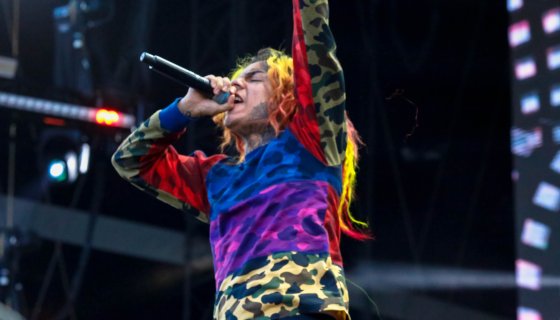 only been home a week and change but already the most infamous snitch in Hip-Hop history is looking to and even his rap peers.

During Tory Lanez’s latest episode of Quarantine Radio on his IG Live this past Monday (April 13), Tekashi hopped in the comments of his one time friend and threatened to dropped dime on him if Tory didn’t let Tekashi join the live and play his new music.

“Lemme play this new shit or ima snitch on u. You not even from America u from Canada.”

6ix9ine tells Tory Lanez to add him to the live to play some new music or he finna snitch on him 💀💀 pic.twitter.com/s8qwo3BSLK

Of course Tekashi was joking and making light of the scarlet letter “S” he bears on his person. Then again and give them information at the drop of a dime so he just might give up whatever goods he has on the Canadian crooner if need be. So Tory might have to actually let Snitch9ine join in on his live feed if push comes to shove. Just sayin.’

Tekashi’s girlfriend, Jade, meanwhile is doing what she can to also soften up fans and joined in on the snitch trolling by posting a video of Tekashi’s platinum plaques with a caption that read “Your King Is Back 🌈🌈💦💦💕💕🔥🔥🍀🍀💜❤️🧡💛💚💙 …. “he don’t want me to tell ya the reason they let em out because they want him to find out who started the Coronavirus 🧐 and no he didn’t rat guys 🙄 he just spoke a lil ;-p 😜”

Y’all think Tekashi will be able to troll himself out of his Hip-Hop pariah status or do y’all think it’s a wrap for his career? Let us know in the comments section.