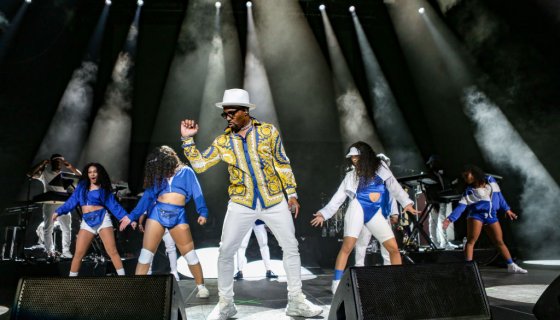 The epic may have been postponed over the weekend, but during an interview with , Riley promises the battle will forge on by next week.

On Sunday (Apr 5), Teddy Riley and Charlamagne took to Instagram live to discuss the that the two industry giants are making to ensure the battle runs smoothly.

“Nobody’s backing out,” Riley said, noting that Babyface has also been under the weather. “He’s not actually 100 percent, you know, he’s been sick. It’s not COVID, but he hadn’t been feeling well after returning from his cruise but he’s doing a lot better.”

Riley also added that a few concerns were raised regarding Instagram’s one-hour time restraint and the platform’s inability to have more than one guest featured on a single live at one time, adding that he would like to see the battle streamed on his Omnisplayer platform, which he previously used to livestream his concert last weekend.

If you missed the @teddyriley1 & Blackstreet concert, you can still watch now for a limited time only! LINK IN BIO #socialdistancing #teddyrileylive #omnis #quarantineconcerts

“We really want this done right, and we don’t want the stops from Instagram,” Teddy continued. “It was made for what we want to do. I don’t think I want to go head up with him and have us going back and forth. We need mediators. So, I thought this is something that would be great for [Omnisplayer] to take to another level.”

Although the logistics are unclear and whether or not fans would be charged to view the battle to watch on the platform, Riley assures fans that everything will be ironed out this week with hoped that the battle will forge on by as early as this week.

“I am ready to go, we just want to make sure everything is done right,” Teddy said. “But once we get everything ironed out, I am ready to go; I’m talking like anytime between Wednesday and Saturday of this week, so Babyface and I are ready.”

While discussing online streaming, jokingly raised concerns that during Teddy’s livestreamed event he noticed that everyone in the room was practicing the opposite of social distancing, to which Riley revealed his opinion on what he believes COVID-19 is all about-referencing a popular but incorrect theory that .

“I just really feel like we’re being bamboozled, you know what I’m saying? We’re being made to believe so many things that are not the truth,” Riley said. “[By now] we know what it is. You know, it’s really about this new world order that they’re trying to put in with these 5G connections.”