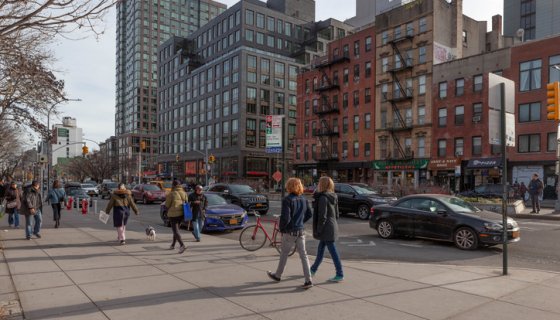 We’re not sure if it’s the sudden removal of , the unemployment situation or the Coronavirus pandemic, but crime in New York City has erupted in the past few weeks. A grisly discovery in Manhattan’s Lower East Side seems to show that it’s only going to be getting wilder as the summer of 2020 chugs along.

According to the New York Post, police discovered the dismembered body of tech CEO Fahim Saleh on Tuesday (July 14) after they received a welfare check call from his cousin. When officers showed up at his East Houston Street apartment what they found was a scene straight out of a Saw movie. Saleh’s body was deconstructed as his head, arms and legs had been removed with his body parts found in bags around the apartment.

“This is ugly,” one cop at the scene said.

Sources described the killing as an apparent targeted murder.

The victim was last seen on surveillance footage around 1:40 p.m. Monday, when he entered his building’s elevator, which opens right out to his seventh-floor apartment, sources said.

The footage from the apartment building appears to show the suspected killer carrying a bag, waiting to enter the elevator with the victim, sources said.

The victim gives the suspect a puzzled look during an exchange as they ride up together. As soon as the victim steps out into his apartment, the suspect can be seen attacking him, according to sources.

While the suspect has yet to be arrested and no motive is known for the chainsaw massacre, but months before he was murdered, the venture capitalist and tech CEO posted a video on YouTube in which he vowed to keep his motorcycle ride-hailing app, Gokada, even though Nigerian officials were cracking down on it.

The video was the last one Saleh’s YouTube account published before police discovered his dismembered body in his Lower East Side home on Tuesday afternoon. Cops identified him as the victim of the grisly murder Wednesday morning.

Saleh, who co-founded Gokada in December 2017, posted the video on Feb. 2, a day after the Nigerian city of Lagos banned the motorcycle taxis on which the company’s business relied.  Officials at the time pointed to “scary” numbers of fatal accidents as a reason for the ban, according to Reuters.

Though Gokada’s drivers had a strong safety record with just 250 “mostly minor” accidents out of 350,000 since September 2019, it seems like someone out there didn’t like the moves this man was making either in business or in his personal life.

Why they’d go to such lengths in a homicide though remains to be seen. Don’t be surprised if this story gets weirder as authorities continue to dig and piece together more of this horrific story.