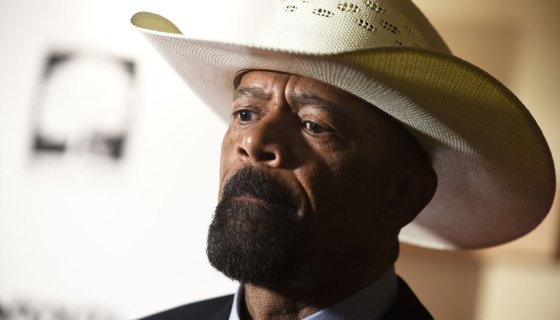 It’s been a while since we’ve seen and that goofy-ass 10-gallon hat of his. The former Milwaukee County sheriff took to Twitter to say that coronavirus is a plan to destroy the concept of capitalism.

Over the weekend, Clarke took to Twitter to fire off his some conservative-laden shots from the ol’ holster, but missing his mark per usual. While some of his missives still remain on the timeline, it was a profane bit of tweeting that looked to be the unraveling of a Black man struggling with his tap dance routine for Massa.

I am TIRED of all this, “we have to err on the side of caution” BULL SH*T. WE HAVE TO GET BACK TO REASONABLENESS DAMMIT. It’s the DAMN FLU. Stop being afraid and start being SENSIBLE. WASH YOUR FUCK*NG HANDS! STOP BUYING TOILET PAPER. DO YOU FUC*ING HEAR ME????

Too bad that one isn’t still up so we could effectively clown it. But don’t worry, there’s plenty left. Like this one:

Pause for a second and think about how we have responded to COVID19. We closed America, we crashed the economy not on the basis of factual information but out of panic, fear & hysteria. We call out the national guard. New viruses will appear in the future. Is this the new normal.

And check this out:

The left tries shut anybody down who is not panicking over this FLU. They point to the death toll and say…don’t you care? I point to the hundreds of thousands of babies who die every year as the result of ABORTION and I ask the…DON’T YOU CARE?

But here’s the best one:

When a LEFTY says they favor shutting down society for the rest of the year I say OK lets do it, that includes the 2020 Nov elections. It’s status quo then and @realDonaldTrump remains President until the next election in 2024. Wouldn’t want anybody catching the FLU at the polls.

Way to own the Libtards, Sheriff Clarke. What a doof.