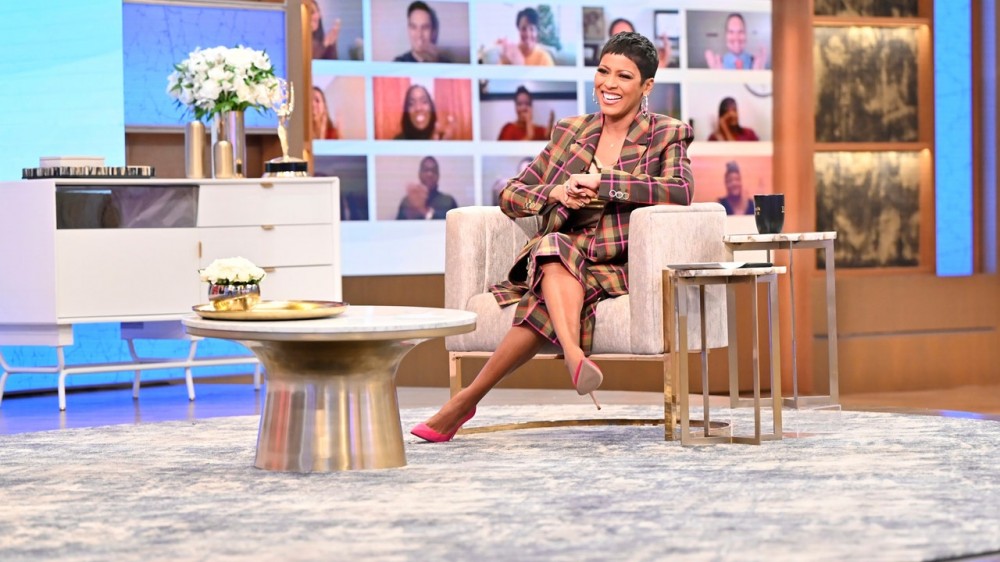 When it comes to style on daytime television, no one can compete with Tamron Hall. The Emmy-winning host dresses with a dramatic flair rarely seen on the small screen, where the standard has long been a subdued wardrobe that doesn’t distract from breaking news. In contrast, it isn’t unusual to see Hall addressing her audience while wearing cashmere knits from Victor Glemaud, ruffled Saint Laurent blouses, or neon pink cropped jackets from Jacquemus—i.e., the kind of clothes typically reserved from front rows or red carpets.

With her affinity for emerging designers, runway artistry, and work by creators of color, Hall has enlivened her medium while constructing a new template for on-air dressing. She lends a nonchalance to pieces that might otherwise seem too dressy for the day, in part because she’s having so much fun wearing them. “They help me feel confident and just safe in my skin,” Hall shared on the phone from Manhattan. “It’s your heart, your mind, and all the other things that you bring to the table, but great fashion does provide that boost.”

Her love of fashion started early. Raised in Luling, Texas, she studied the confident way the women in her family carried themselves, and the glamorous outfits they put together each week for their Sunday service. “I was raised in the Southern Baptist Church, which includes the Bible, good hats, and a lot of color in your clothing,” she says. “My mother and my aunt were not wealthy women, of course, but on Sundays, they expressed their fashion identity. Ironically, it was in church. [My grandmother] was known for her hats, which would be the talk of the town each Sunday.” Hall recently shared a photo of herself at seven years old wearing a three-piece crop top suit, underscoring her lifelong love of fashion. “I’m not sure about the top being appropriate, but it was cute!” she says. “Appreciation for fashion has always been part of the fabric of my life, pun intended.”

Despite her innate interest in style, Hall wasn’t always able to express herself via her wardrobe. At the start of her career as a reporter for a local station in Fort Worth, the double standards of workplace attire became apparent. “I had a news director who was a man, and there was a heat wave [so] we were working on one of those infamous Texas summer days, and it was over 100 degrees. I had a jacket on and a long-sleeve button-down shirt,” she explains. “I remember wanting to take my jacket off, and I expressed that to him. He said, ‘That’s not very professional; you need to keep your jacket on.’ Somehow my credibility and professionalism were linked to whether or not I kept a blazer over my long-sleeve, conservative, button-down shirt. At that point, I realized the sexism and antiquated views.” The experience made her resolve to do things differently once she had the power to call the shots. “I thought, When I have my moment to express my independent view on fashion, I’m going to do so,” says Hall. “Once I became a news anchor in Chicago, I started to build that.”

At WFLD-TV in Chicago, Hall learned the impact that wardrobe can have for herself and the people watching at home. “In the morning, especially on local news, I would try to avoid dark colors,” she says. “People don’t want to wake up to someone drab and boring. You want a little life, something that is going to pick you up.” The morning show format also allowed for greater freedoms. “We were doing cooking segments, talking fashion, and more lighthearted stories,” she says. “So I started incorporating more shades and began to express myself, when appropriate, through color.”

By the time Hall headed to the Today Show as coanchor in 2014, she understood the tenets of her tastes, but meeting stylist Eric Niemand in 2015 on the set of a Philly Style magazine shoot took things to the next level. “I’d always styled myself, all of the years on the Today Show and for everything that I’d done,” says Hall, who admits to feeling some trepidation at letting another person take the reins. “Every celebrity will tell you that moment where they’re put in an outfit and think, I would never wear that. I was a little unsure, but I went in, and his taste was very much in line with my personality.” Niemand has since been nominated for the Emmy for outstanding costume design for his work on Hall’s show, a well-deserved achievement. Hall counts on him to distill the latest trends into ensembles that represent who she is. “Eric selects things that resonate with me as a woman and as a journalist. He’s embraced all the things that are a part of my journey,” she says. “His selection is fashion-forward but mindful of what I do and who I am.”

Before Niemand entered her life, Hall would bounce fashion ideas off a true style legend and her close friend, Prince. “Prince was someone very close to me,” says Hall. “Before every show, I would take a photograph and send him the options of the day; then he would pick out what I was going to wear on the show.” Thanks to their regular texts, Hall’s selfies even made their way onto the cover of Prince’s 2015 single “If Eye Could Get Ur Attention.” “He didn’t even tell me he was using that photo,” she says with a laugh. “I woke up one morning, and it was the cover of one of his songs.”

Impressing the Purple One is a feat in itself, but Hall’s greatest accomplishment is the launch of her eponymous talk show. It’s there that she takes her most significant style risks and has asserted herself as a necessary figure within the world of daytime. “Taking the leap of faith to go out and pitch the show was one of the biggest acts of independence in my life,” says Hall. “It’s second to when I moved out at age 17 to attend Temple University. For me, the show is representative of my journey as a journalist. Having the ability to call the shots, not in the sense of simply being a boss, but in determining the trajectory of my career is an indication of that freedom.”

To that end, she and Niemand make sure the pieces featured are meaningful. “The fashion on the show is expressive,” says Hall. “It relates to the freedom of having a show where anything can be discussed. [My audience and I] can laugh together, cry together, and have these rich conversations. We like to say you’d have when you’re two drinks in after brunch, and everybody is talking the way they really would amongst friends.”

The honesty and openness has led to striking looks, and created a platform where a mature woman of color is visibly experimenting with bold style. During New York Fashion Week, she highlighted emerging designers by wearing their creations and devoting a particular segment dedicated to their labels, shining a light on fresh local talent like David de la Cruz, Jo Noble, and Anita da Silva in the process. The power to pay it forward, while representing a demographic television could use more of, is part of Hall’s modus operandi. “As a woman who’s been through some things, who has been knocked down, but got back up at age 48, the show is an expression of my independence,” says Hall. “I lost a job for the first time in my life, and I was looking for a way to reboot and reset. And so my fashion represents the independence I feel now, as a woman who just turned 50, but thinks, I can still jazz it up.”

Saying that Hall can jazz it up on occasion is an understatement. Throughout the show’s run, she’s been consistently chic and her outfits of the day are part of the enjoyment of tuning in. Hall views her wardrobe as being in a constant state of evolution, shifting to match each new phase she enters. In April of 2019, the journalist welcomed her first son, Moses, with her husband, Steven Greener, and since then, she has seen her clothing preferences change of late. “I’m embracing different little things season to season. Right now, I’m into maxidresses,” she says. “Now that I’m more active with an 18-month-old child, I haven’t given up on my style, and I will never do that, but there’s certainly a different functionality to things.” Still, Hall wouldn’t have things any other way for all the changes in her personal and professional life. “The show is hard. It’s complicated. It takes a lot out of my staff and me to make sure that we’re doing it right. I dreamed of being a mom, and here I am, and some days I get it right, and some days I get it way wrong,” she says. “I’ve seen my dreams come true in a perfectly imperfect way. I don’t think I would love it as much if it had been easy.”