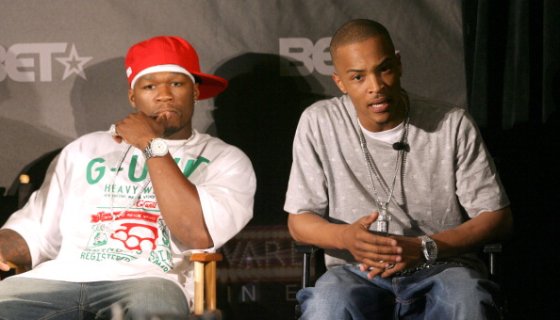 wants to go head to head with for the next battles and he doesn’t care who knows about it.

On Monday (Jul 6) took to Instagram to wish Fif “happy birthday,” before adding that he would like the two to match up for the online event because he “knows [he] has the better catalog.”

During the video, T.I. continued his taunt, calling out the Queens rapper by adding a jab regarding Fif’s infamous 2007 record release faceoff with .

Although T.I.’s challenge was done lighthearted, reportedly didn’t take the call out of his longtime friend too well. According to affiliate K Dubb, Tony Yayo heckled him while he was performing at 50 Cent’s birthday party in New York, before issuing a threat.

“Man I guess Tony Yayo had a real problem with you calling out 50 because when I ran into him after performing at 50’s birthday party, he acted like a joke I told about 50 offended him,” K Dubb said during the Instagram live video. “I told the joke I have told a million times in front of 50 and he laughed but all of a sudden Tony Yayo acting like he’s in 50’s body and want to tell me what that man ain’t laughing at, even though I saw him laughing.”

While 50 Cent has yet to accept the challenge, he did repost an article highlighting the challenge before poking fun claiming that T.I. was “high” for claiming he has more hits.

“yo somebody passed TI the weed they gave smokey in Friday. LOL 😆,” 50 wrote.

yo somebody passed TI the weed they gave smokey in Friday. LOL 😆

Despite the back and forth antics, neither camp has confirmed yet whether an actual battle will take place, but that didn’t stop K Dubb from calling out Tony Yayo to a boxing match for the disrespect.

“I ain’t feeling what Tony did for real, like if you feeling some type of way he need to bring that to you,” K Dubb continued. “Now he has gotten disrespectful and all I want to do is challenge his old ass to this ring and we will see who’s the tough one then. I’m 39 and he’s 59, he don’t want these problems.”

Even though a few fan comments made T.I. get a little hype for going after 50, T.I. maintained the message of the movement encouraging K Dubb to keep it non-violent.

“Man we ain’t on that, all of this is in fun,” T.I. said. “But don’t ever get it twisted we ain’t scared of nothing but we are here to celebrate Black life not take it.”

While the two camps go back and forth over the challenge itself, Twitter had plenty to say about T.I.’s challenge from fans agreeing that T.I would be victorious to some claiming the entire challenge is asinine.

“Uh ohhhhhhhh!!!! #TIvs50 is trending and it’s sparking some WILD debates all over! Lol aye PERSONALLY I’m sick of y’all saying all 50 has to do is play “Many Men” or “just click play on Get Rich or Die Tryin’” and then the battle is over, y’all sound nuts G,” one Twitter user wrote.

Uh ohhhhhhhh!!!! #TIvs50 is trending and it’s sparking some WILD debates all over! Lol aye PERSONALLY I’m sick of y’all saying all 50 has to do is play “Many Men” or “just click play on Get Rich or Die Tryin’” and then the battle is over, y’all sound nuts G 😭. pic.twitter.com/2b1nShCFsV

Either way, even if the battle doesn’t happen all of the jokes surrounding the idea of the two facing off are enough to keep fans talking for a while.

Check out the full live video between T.I. and K Dubb and see what Twitter had to say about it all below.

If 50 play “How We Do” that shit might hit different 🔥 considering his past beef with Game. I’m glad they lowkey dead that beef, because I wanna see them n*ggas on a track together may not ever happen but 🤷🏾‍♂️ #Verzuz  #TIvs50

No wonder why 50Cent keeps clowning niggaz. Coz y'all give him reason to. 50Cent single handedly influenced the rap culture when he blew up till he decided to venture into business. T.I is dope, but come on guys. To go against 50?#TIvs50

If you are scared of 50, @Tip got a message for you. Take a seat, shut up and tell your master to step out. #TipVs50 #TiVs50 #BreakingNews RT for Tip | Like for 50 pic.twitter.com/3fnJkZFC4W

Dudes feared 50 cent nobody feared t.i plus u aint fucking with the dr.dre beats. lol u aint the king of the south buddy never was. Wheres jay z punk ass? #TIvs50

Niggas need to stop if they thinking T.I. winning that battle #TIvs50

I would put TIs Trap Muzik up against 50s Get Rich or Die Trying. Track for track, two of the best albums of all time. #TIvs50 pic.twitter.com/JLO6Poobbp

BEFORE IT WAS FITTED TO THE SIDE TI IT WAS A YOUNG MAN BY THE NAME OF T.I.P (PAUSE) AND HE WORE A BEANIE TO THE SIDE WITH RUBBERBANDS ON HIS WRIST 😂😂 #TIVS50 ITS GONNA BE A GOOD ONE