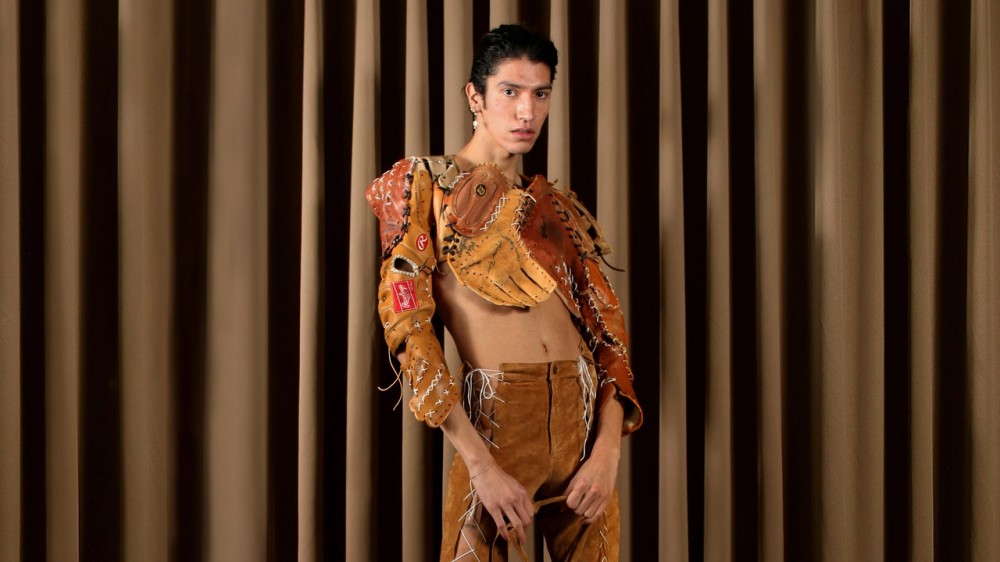 Syro cofounders Henry Bae and Shaobo Han are on a mission to create heels for all. The two friends are both queer and gender nonconforming, and they began the line when they simply couldn’t find heeled footwear in their sizes. Their Brooklyn-based label, a “femme footwear brand,” offers heels in a large range of sizes (from size 8 men’s up to a size 14) including sandals, boots, and more that are meant to be worn by all types of wearers. “I’m obsessed with runway shoes, but even if I could afford them, I could never wear them,” says Bae.

While the line isn’t specifically catered to men, Bae and Han’s footwear designs do often challenge the idea of masculinity. “Everything we do is to subvert masculinity and the image of what masculinity is,” says Han, while Bae adds, “We greatly enjoy making a mockery of masculinity.” One of their most popular footwear styles, for instance, takes cues from the Adidas Adilette slides, but they added a lifted block heel to it. (“It’s the shoe that all men wear then they walk down the street to smoke a ciggy,” says Bae.) This month, Syro also launched two new heels that take their vision of remixed athletic footwear even further.

Syro’s latest release features two heeled boots inspired by baseball equipment. The Wilson boots ($240), with red whipstitching, are inspired by the actual ball, while the brown leather Mitt boots ($240) take cues from mitts. To accompany the new shoes, Bae and Han also released a special new photo series; it addresses the air of toxic masculinity permeating the sports world, an arena that continues to be strictly divided by gender, and is especially exclusionary of queer athletes. (In the NFL’s 100-year history, for instance, there have reportedly only been 14 players who are openly gay or bisexual.) “It’s an homage to all of the queers who feel like they identify as failures in an athletic lens,” says Bae.

For the photo series, the duo wanted to combine masculine sports gear with a more feminine, fashion-minded aesthetic. The resulting looks take athletic style codes and twist them to be more fluid and free. The pair styled their models in their heeled footwear, and even created special ensembles that are twisted takes on sports uniforms. In one look, a model sports a cropped jacket that is made entirely out of baseball mitts. In another, a model sports an all-white “combat fighter look” including a tank, mesh garter, and sparring helmet, which nods to Bae’s own history of practicing Taekwondo growing up. “I did it for 10 years and went up to a black belt,” Bae says. “I’ve come to realize how sports are very binary. Men and women compete exclusively against each other, and there’s no space for any gender fluidity in sports. Even growing up, I had to be separated from all my girlfriends, and I was forced to play with these boys that I hated, and that hated me.”

Both Bae and Han’s experiences as queer youth in high school gym class—specifically, the locker room and their feelings of being “not manly enough”—was another driving force for the project. “All our queer friends also hated gym class,” says Han. “Queer kids are already being bullied outside of gym glass, and suddenly we’re in a space where we have to change and confront the awkwardness of our own bodies. It’s also the first time seeing other male bodies, so there’s the attraction, but the confusion and feeling inferior. It’s a breeding ground for toxic masculinity.” They wanted to show through fashion that queer people should be able to comfortably hold space as athletes. “This is our way of saying ‘fuck you’ to the system,” says Han.