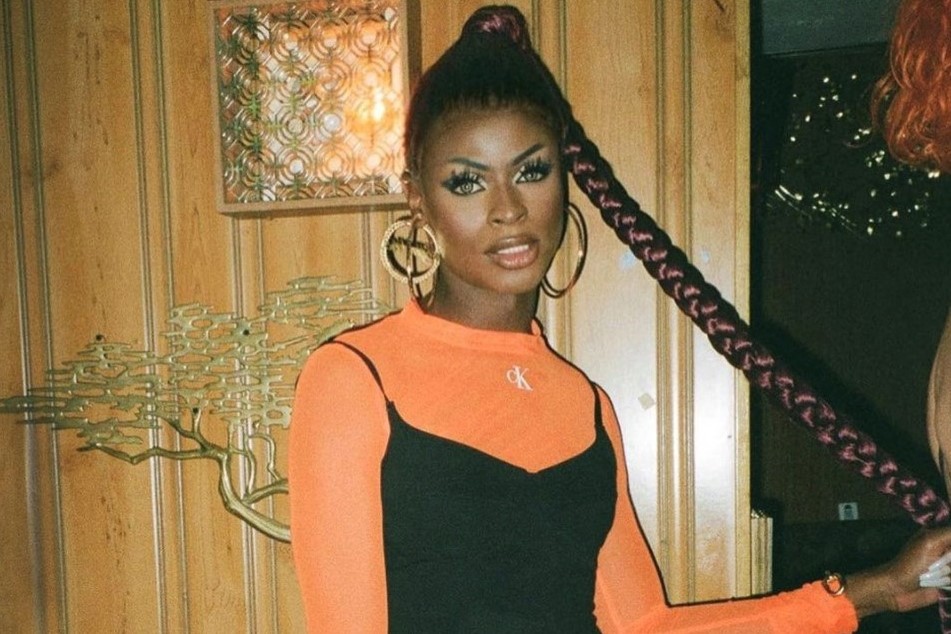 When Calvin Klein’s Pride function was suddenly called off due to torrential rainfall, the Ebony Enchantress called on her Drag Race sisters and took the party into her own hands

As per queer canon, it’s not a party if it was not nearly shut down by a doomsday deluge of rain. The Scissor Sisters called it back in 2011 with ”Let’s Have a Kiki”. And then so did Sarah Jessica Parker on Glee – but truly the less said about that the better. Fast forward ten years, and the world has been engulfed in an unprecedented, torrential downpour. With summer a worldwide washout, over in New York, Pride functions across the city were dramatically called off – including Calvin Klein’s Moments of Pride Central Park soirée. Almost. Yes, we may be hurtling towards climate disaster and a life lived under the sea, but with a guest list helmed by Drag Race champ Symone, there’s no way that was going to dampen the mood. The function was going ahead.

As clouds began to brew above the park’s grassy knolls, Symone, flanked by Aquaria, Kandy Muse, Leyna Bloom, and her House of Avalon crew, took herself off to The Flower Shop, a wood-panelled basement venue on Manhattan’s Lower East Side, to make good use of Calvin Klein’s running tab. And, as the storm began to swell and blow a hooly outside, Kandy Muse, dance troupe Haus of Tisci, and rapper Chika slammed the stage with impromptu performances. As Symone put it best – “shots, fries, and stunts? What else does a girl need for a night in New York, baby?” Here, we catch up with the reigning queen on what went down, her first ever Pride, and her ascendancy to fashion favourite.

Hey Symone! So what can you tell us about the night? Any good gossip?

Symone: Oh, diva! I had me a good ol’ time. You know it was raining that night, but I didn’t let a lil bit of precipitation stop ME! We went on over and had a time! I got to see some of my NYC friends that I didn’t know were going to be there which was a lovely surprise.

Oh and they had an open bar, so I took it upon myself to take FULL advantage of that. Baskets of fries was going around for our eating pleasures. Then to top it all off they had (impromptu) performances by my sis Kandy Muse and The Haus of Tisci! Shots, fries, and stunts? What else does a girl need for a night in New York, baby?

How did it compare to your first ever Pride? How did baby Symone used to celebrate? We bet there are some stories.

Symone: There’s literally no comparisons in my opinion! Haha my first pride was back home in Arkansas, baby! The atmosphere was different to say the LEAST. Now I can’t give you too many specifics by penalty of the law, but hotel rooms were definitely wrecked and havoc was achieved.

So many Pride events have been cancelled or postponed till later in the year because of the pandemic. What can we do to make up for lost time, Symone?

Symone: Well, I say take all that pent up energy, frustration, and sexual energies and DANCE. DANCE I SAY! Hahah, we need more of it! Dance and be around the people you love. We ain’t got time for anything else.

You’ve collaborated with some impressive brands since being crowned winner of Drag Race (Calvin Klein included, of course). How has your aesthetic changed since bagging the sceptre?

Symone: Oh yes! Being a winner has allowed me some fabulous opportunities. Thank you to Calvin Klein for bringing me out to the function by the way! As ya probably saw, I had a time!

But to answer your question, I wouldn’t necessarily say my aesthetic has CHANGED, but I’m definitely getting to play more and expand the idea of who Symone is through the fashions. I’m able to do more now and really execute the ideas and looks I want. If anything, I’m just able to be the full-fledged Ebony Enchantress!

What’s the most treasured piece of clothing in your wardrobe and your most hated item in other people’s? What are you salvaging from, and actively chucking into, a house fire?

Symone: Don’t hate me y’all but I gots to be real! I love a piece of clothing – god knows I do, but it’s the wigs for me! I have to save my wigs! I can get a piece of clothing remade or buy it, ya know? My One Wears though? Those are iconic! As far as what needs to be burned, CHAPS! Throw em in the fire!