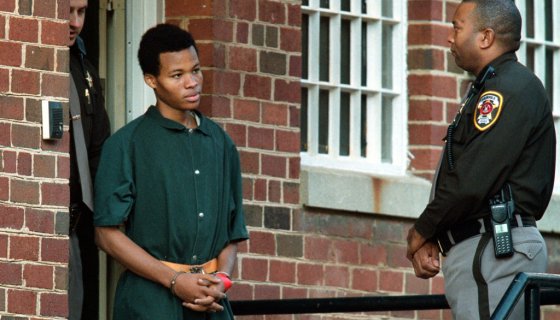 The “D.C. Sniper” case rocked Washington, D.C. and the surrounding area in 2002, leaving 10 people dead and three others critically wounded. While mastermind John Allen Muhammad has long been executed, his accomplice will have his case dismissed by the nation’s highest court.

NPR reported on the U.S. Supreme Court’s decision to dismiss Malvo’s case, who was then 17 and under the care of Muhammad. The shootings were part of an orchestrated effort to sow seeds of terror and demand millions of dollars under the cloud of a threat to the public. Muhammad and Malvo were arrested on October 24, 2002 at the Maryland highway rest stop after a widespread manhunt and tips from the public lead to authorities catching the pair.

Malvo challenged the life-without-parole sentence that was handed to him due to the fact he was a minor at the time of the arrest. Earlier this week. Virginia Gov. Ralph Northam signed into law a legal measure that will allow juvenile lifers to seek parole after serving at least 20 years. Malvo is currently being held at the Red Onion supermax prison in Virginia and could be eligible for a 2022 release.

While this might come as jarring news to many, Malvo may very well never go free considering he is currently serving four life sentences in Virginia, and six life without parole sentences in Maryland. The charges in Maryland are also being appealed by Malvo and his team, using the safe defense he used in the recent Virginia matter.

The outlet added that in 2012, the high court struck down the death penalty for juvenile offenders and declared mandatory life-without-parole sentences as a violation of the Constitution.  Five years later, another Supreme Court decision found that life without parole sentences for juvenile offenders should only be applied to the most heinous of crimes.