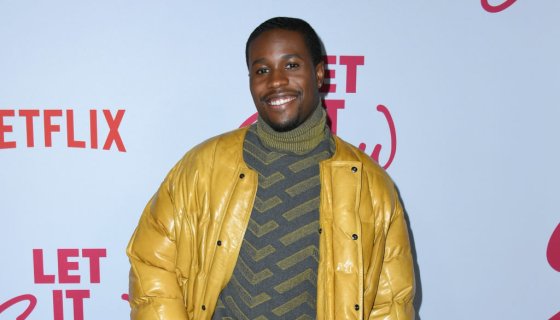 The current state of events has everyone looking for an answer, so when actor shared his thoughts on how to mend the relationship between the Black community and police, people had a lot to say.

On Thursday (May 28), Shameik Moore took to Twitter to share his thoughts on the discourse surrounding police brutality against black men and women. Known for his roles as Raekwon in Hulu’s and , Moore’s take on the situation was met with swift backlash for his comments following the death of in police custody after suggesting that Black people need to learn

“I have a very strong opinion that the black community hates to hear.” Shameik Moore said, “We need to learn how to deal with police… and or racism… because THIS is the part of the scenario we have failed to fix. We have to work on our community before blaming everything on ‘racist’ and the police.” He went on to reference “black on black violence,” similar to how a talking head on Fox News name-drops Chicago when school shootings provoke conversations on gun control.

While Moore was seemingly pointing fingers at the Black community, he did add that “power-hungry policemen” need to be reprimanded.

“People are dying and we’re all handling it differently,” Moore continued. “Power-hungry policemen should absolutely be reprimanded, punished for their behavior. How they’re handling us. … When I woke up I was thinking about a solution. We’ve been hoping that the police would treat us better for a very long time. Before I was born. The black community is dealing with the history of our people in 2020.”

As if his Twitter rant wasn’t enough, Moore took to Instagram to go live to clarify his position after catching swift backlash for his stance. During his Live, Shamiek Moore jumped even further out the window by claiming that Rosa Park could have taken a cab instead of riding the bus.

Im gonna go live on Instagram… my tweets we’re taken out of context. And against my teams advice, I want to talk to everyone face to face on ig..

While Moore may have thought he was coming up with a solution, Black Twitter quickly assembled to let him know not only how asinine his statements were but also dropped some literature to help him understand the err of what he said.

Here is some advice.

Delete all your tweets and videos from today.

Take a week off social media and listen to your team.

Please don't. Here's what you should do instead of digging a deeper hole:

1) Donate to the @MNFreedomFund
2) Read Baldwin, Morrison, @DrIbram + others
3) Have private, offline conversations with folks who can talk you through why you were misguided

Despite the backlash, Moore is seemingly standing firmly in his position posting. His last tweet features a link to an interview with Power 105.1’s Breakfast Club and Dr. Claud Anderson on race.

Wondering what I was saying when I mentioned Rosa Parks? This whole interview is important, but u can start at 16:58 https://t.co/G4nFJSnu5J

rosa parks terrorizing shameik moore and the rest of the niggas like him tonight. 😭 pic.twitter.com/mFbIBd2c1z

I HATE black people who don’t talk about black on black violence until we’re fighting for our rights. You have 365 days to bring that up but you wanna coon now pic.twitter.com/vw3kjWfpwo

Shameik Moore saw a black man get yanked from him car, thrown on the street, and choked to death with a cops knee for 10mins and decided to get his ass on Twitter tell us "yall niggas just dont know how to act, that's why massa killing yall". Shut yo black ass up pic.twitter.com/PAQPRLV6Bw

Shameik Moore Pr Team pulling up to his house after seeing his Rosa parks take on insta live pic.twitter.com/4Amhw2MEi3

So can we submit our replacements for Miles Morales now? Cause I have suggestions ready #shameikMoore pic.twitter.com/zKKsERNtAH

Shameik Moore is arguing with people on IG live… pic.twitter.com/KrF8rheMZd

So according to Shameik Moore, there’s was a secret underground rail road transportation system that Rosa Parks could’ve taken instead of causing all the trouble of the bus.