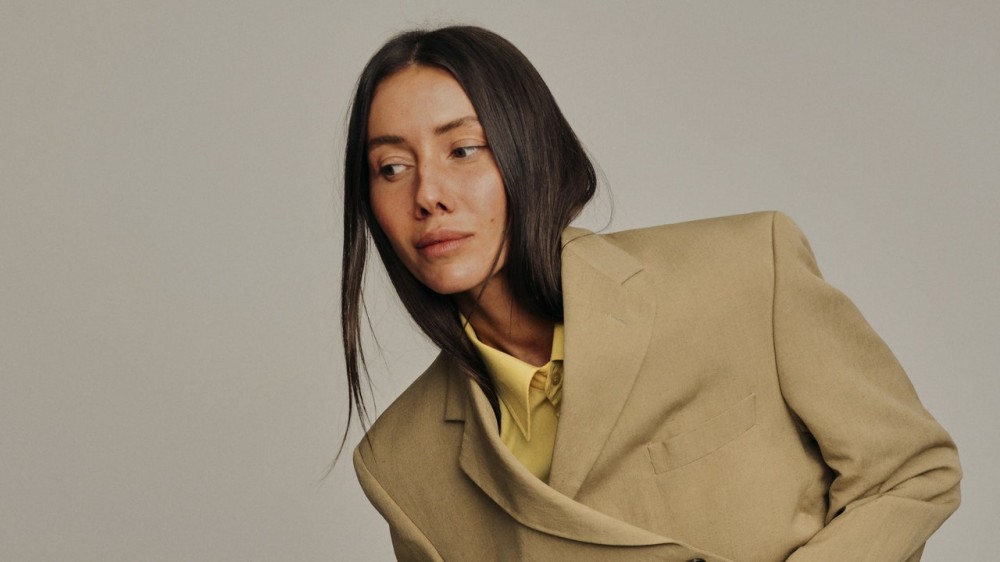 Julie Pelipas, stylist and former Vogue Ukraine fashion director, long been a street style favorite, drawing photographers in, siren-like. The gravitational pull makes sense: Pelipas, a mother of two, cuts a severe figure at 6’1 and exudes an overwhelming air of elegance. Her clothes, often loose, languid, and linear, all deliciously hang off of her frame. Her towering look did not go unnoticed, and while attending fashion shows over the years, Pelipas had always been stopped by hoards of photographers. Though, when ID’ing her outfits, many mistook her looks, especially her suits, as Phoebe Philo-era Celine creations. But fast forward years later, we’ve learned that those suits were actually the prototypes for her current suiting-minded label, Bettter. “I only had one Celine suit, but people decided that all the suits I wear are Celine,” she says. “All the others are prototypes from Bettter!”

Bettter is Pelipas to the core. Suits jackets are just the right amount oversized and the pants are perfectly slouchy, all with a sharp dose of exquisite tailoring. Everything hangs and fits just so. (The styling of the lookbook is also very Pelipas in her signature high-meets-low aesthetic: Oversized jackets are placed over graphic T-shirts and trousers are paired with sneakers.) Each style is named after a well-suited icon. A boxy thigh-grazing gray suit jacket is titled “Fran” after Fran Leibowitz, a black jacket with a square cut-out in the back is “Rogers” for the architects Richard and Su Rogers (who are also a couple). Pelipas first had the idea a few years ago but struggled to justify putting it out into the world. “We produced too much, we consumed too much, we were never 100% happy with the outcome because of those never ending marketing stimulations. It reminded me the ouroboros,” says Pelipas. “It’s only now that people are starting to think about what they buy.”

,” says Pelipas. “It’s only now that people are starting to think about what they buy.”

To help negate the wasteful aspect, each suit is sustainably made, sourced from second hand markets or from deadstock from factories, and manufactured in her native Ukraine. Pelipas has an acute knowledge of the thrifting industry of Ukraine, which is an economic force in the Eastern European country. She began sourcing her own pieces from Lesnoy, a gigantic second hand market of stalls and stores of already-worn garb located about 15 minutes outside of Kyiv. When starting Bettter, she employed a scouting team of local youth who she knew frequented the markets. Now, the team travels beyond Kyiv to the likes of Ivano-Frankivsk and Chernivtsi on the hunt for second hand  pieces and fabric to rework into suits. For Pelipas, working with vintage is the most romantic part of creating clothes for Bettter. “Vintage has had life and what we do is we actually fix it. We really repair it to the condition where you can live in that suit,” she says. In addition to the second hand  market, Pelipas has also tapped local factories for deadstock fabric which has been rife with options, all of which comes at a time when they are facing an economic crisis. Her latest find? Fabric originally meant for old Ukrainian men’s suiting. “It’s brilliant,” she says.

Pelipas has several ideas planned for Bettter, some of which includes algorithms. She has partnered with 3DLook, a startup from Odessa, Ukraine who won the LVMH Innovation Award in 2019. The company, which now has an office in Silicon Valley, scans the body and produces detailed measurements of the silhouette, something that Pelipas notes will create a made-to-measure suit virtually. The partnership also falls into a sustainability vein, meaning that there is no overproduction or excess product. “We really don’t want anyone to buy suits that won’t fit first,” says Pelipas. “It’s a really complicated process to customize something. But in our case, it’s optimizing because you don’t create anything that people don’t need. You only produce when people want it.” In addition, she wants to expand to sourcing and producing clothes in close-by countries with hefty second hand markets, like Poland or Czechoslovakia. To minimize the carbon footprint of traveling and shipping, Pelipas’s team would provide simple algorithms for local seamstresses or tailors to easily create the clothing in their own country.

Eventually, Pelipas wants to expand Bettter beyond suiting and into outerwear and denim, and collaborate with local designers. But her inspiration remains thrifting, of course. After a recent trip to the second hand market in Ukraine, she is already planning her next release. “I bought such beautiful, crazy old sweaters at Lesnoy. I’m so excited,” she says. “I am imagining all the pieces I can make with them now.”