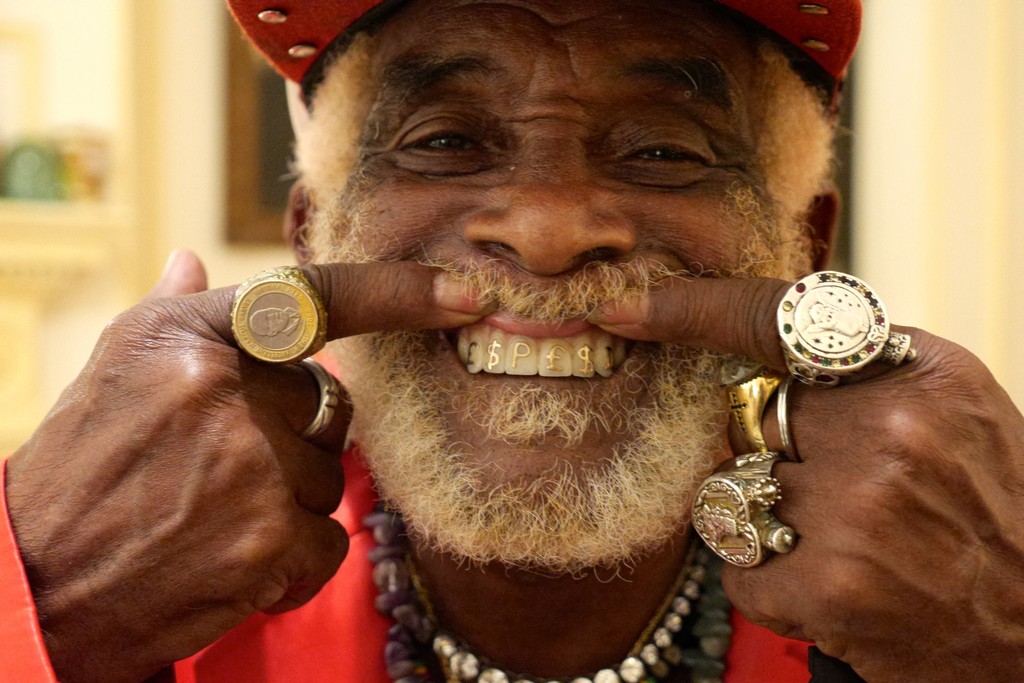 Lee “Scratch” Perry has seen it all. The notoriously eccentric reggae producer, vocalist, and visionary has created classics with artists ranging from Bob Marley & The Wailers to The Clash and The Beastie Boys. A literal living legend, he may be the only person on earth to have collaborated and quarreled with such iconic Jamaican producers as Coxsone Dodd, Joe Gibbs, and King Tubby—and outlived them all. When he burned his own Black Ark studio to the ground in 1979, people called him a madman, but Scratch just has his own way of doing things.

One rainy night in the English countryside, filmmaker Reshma B sat with Scratch in a spooky old mansion, interviewing the man who’s also known as The Upsetter, The Super Ape, and Pipecock Jackxon for her film Studio 17: The Lost Reggae Tapes, which has its worldwide debut today on Quincy Jones’s Qwest.TV and Jay-Z’s Tidal.

Scratch was describing to her why he preferred the sound quality at Studio 17 in downtown Kingston, where he recorded immortal tunes like “Trenchtown Rock” and “Mr. Brown” with Marley, Peter Tosh, and Bunny Wailer long before The Wailers took the world by storm. “One of the studios was humming,” Scratch explained—demonstrating the problem by imitating the low hum. Next, he changed to an irrititating high-pitched sound, like a cold wind blowing. “But Randy’s wasn’t humming or Randy’s wasn’t [shhhh-ing].” Moments like these make the Studio 17 film a rare treat for music lovers seeking to understand the creative alchemy that makes reggae the most mystical and misunderstood music in the world.

Hailed as “one of the finest reggae documentaries ever made” by acclaimed author John Masouri and “a magical piece of work” by veteran UK reggae radio DJ David Rodigan, the Studio 17 doc premiered in late 2019 on BBC television where it was viewed by over 1 million people. Plans to hit the film festival circuit in 2020 were put on pause by the pandemic, but the film is finally streaming worldwide just in time for Reggae Month, the international celebration of Jamaican music that kicks off today, Dennis Brown’s birthday, and runs through Bob Marley’s birthday on February 6 all the way until the end of the month.

But for people like Scratch and Reshma B—whom NUEVO readers know as the Boomshots correspondent who does IG Live interviews with all the top dancehall stars—every month of the year is reggae month. Scratch, who will turn 85 next month, describes reggae music as “a spiritual organization that I put together,” which isn’t much of an exaggeration. “It was like a weapon, a revolution weapon,” he said. “Redemption music. Sufferer’s music. Music to let you have freedom, set you free.”

As he spoke, Reshma B noticed that Scratch’s red suit was covered with dollar, pound, and Euro signs, apparently written in Magic Marker. While posing for a picture at the end of the interview, he pulled back his lips to show his initials embossed in gold on his teeth. Upon closer inspection, Reshma noticed that the L was a pound sign and the S was a dollar sign. “Call him crazy if you like,” Reshma says, “but Scratch is all about his business. Revolutionaries have to eat too.”

One quality that sets Studio 17: The Lost Reggae Tapes apart from most other films about Jamaican music is that the filmmakers do not shy away from telling the truth about the economic exploitation faced by many reggae pioneers. “Homeless and down on their luck—that’s the story of the average Jamaican musician,” says Ali Campbell, the lead singer of the UK reggae band UB40. “A lot of the people that we consider to be stars were being ripped off by the producers in Jamaica and in London and were making great records for boxed chicken.”

Although UB40 has enjoyed the success of chart-topping reggae hits like “Red Red Wine,” the group started as a bunch of unemployed lads in Birmingham, England. (UB40 is the name of the Unemployment Benefits form British citizens must fill out to go on the dole.) “I grew up in West London listening to UB40 in my house,” Reshma B recalls. “One of my favorite songs was ‘Kingston Town,’ but like most people, I didn’t realize that they didn’t write that song.”

While making the documentary, producer Reshma B and director Mark James tracked down Lord Creator, the Trinidadian singer who originally recorded the song (then titled “King and Queen”) over a ska beat at Studio 17. Although he was a household name in Jamaica during his heyday, Lord Creator told Reshma that he received no royalties for all the hits he made. He was destitute when he found out that UB40 had covered one of his songs, and the profits from its success changed his life forever. But not all reggae stars of yesteryear are so lucky.

Even a legend like Scratch has suffered from bad business deals. “We have a lot of songs but in those times we just tried to get them to the outside world, and we didn’t have enough money to do it weself,” he explained to Reshma B. “So we have to give it to another company, but most of them don’t like doing promotion.” Despite his extensive catalog, Scratch earned much of his living by appearing on music festivals all over the world—before the Coronavirus put a stop to live performances, that is.

“I respect the fact that UB40 made a point of registering all of their cover versions with PRS, to ensure that the original composers of these classic tunes are properly compensated,” says Reshma B. “Ali Campbell’s father was a singer and songwriter himself, so he instilled that in his kids.”

Fathers and sons are another major theme of Studio 17: The Lost Reggae Tapes, which tells the story of Clive Chin, firstborn son of Vincent Chin, the Chinese-Jamaican entrepreneur who founded Randy’s Records and opened the recording studio upstairs. Clive fell in love with studio life, learning the art of production from his dad and the many iconic artists, musicians, and engineers who would pass through the studio on a daily basis. Clive and his schoolmate Augustus Pablo linked up at Studio 17 to record Java Java Java, one of the world’s first dub albums, and Clive and his father amassed an extensive catalog, much of it released on the famous Impact! record label.

In last year’s book Rockers, the late filmmaker Ted Bakaloukos described the experience of visiting Randy’s Studio 17 during the mid-1970s: “Kingston proper. The center. Busses, cars, bikes, noise, dust, honking, and way too many people… There is a small street, more like an alley, with a few parked cars and bikes and a dozen or so guys, dreads, leaning against the wall on the shady side. This is the legendary ‘Idler’s Rest,’ next to Randy’s Record Shop. It’s where musicians, singers, and hangers on get together every day. It functions as a private office, employment agency, public relations agency, and talent show for many singers and studio musicians, and young upstarts looking for a place in the music business. Next door at Randy’s Record Shop they’re spinning the new 45s. The sound, blending with street noise, flows around the corner.”

Footage from Bakaloukos’s classic reggae film Rockers appears in the Studio 17 doc, along with stories from people like Scratch and Clive and his stepmother Patricia Chin, who ran the record shop while her husband worked in the studio. Their voices, and those of the musical geniuses who would gather each day at Idlers’ Rest, enliven the film, shedding light on the way artists whose music went on to make shockwaves around the world would end up literally singing for their supper.

When political violence in Jamaica forced the Chin family to relocate to New York in search of a better life, they left in such a hurry that they abandoned over 1,000 reels of audio tape. The documentary tells the story of Clive’s quest to rescue that treasure trove of precious recordings, which miraculously survived in a storage room for years despite the ravages of Hurricane Gilbert, looting, and intense tropical heat.

Patricia Chin, who has recently published her own memoir titled Miss Pat, went on to build V.P. Records, the world’s largest independent reggae label, in Jamaica Queens. Clive’s son Joel became an A&R executive for V.P., working closely with chart-topping acts like Sean Paul and Beenie Man. Joel would often encourage his father to do something with the tapes that he’d rescued, but somehow Clive never got around to it. Then in 2011, Joel was tragically murdered in Kingston while coming home to his wife and infant daughter. As a way of honoring his son’s memory, Clive resolved to restore the tapes. In the process, he discovered a never-before-released song by Dennis Brown, the late great Crown Prince of Reggae, which can be heard for the first time in Studio 17: The Lost Reggae Tapes. What better way to celebrate D.Brown’s birthday than to watch the documentary right now?

“This film has taken a long time to make because there’s been so many twists and turns,” says Reshma B. “But that’s how life is.” Although the filmmakers look forward to the day when Studio 17 can have a proper screening in major cities like Kingston, Jamaica, they’ve been able to make the film available to Qwest.TV subscribers—and free of charge for the next seven days on Tidal, where Reshma B curates all the reggae and dancehall content and writes the monthly column Murda She Wrote.

Studio 17: The Lost Reggae Tapes will be featured as part of Tidal’s first-ever Reggae Month celebration, packed with carefully curated playlists honoring Jamaica’s legendary recording studios, producers, and pioneers. “Shout out to Tidal for showing love to reggae on their home page for the first time ever,” says Reshma B, “We’ve taken it all the way back to the legends of the ska era, and gone straight up through classic dancehall, paying homage to the culture all the way. Look out for new content dropping each week throughout February.”

Born out of struggle, reggae has been preparing longtime listeners for challenging times like the ones we’re living through now. “This is a music that was made because people needed a way to survive,” says Reshma B. “What better way to get through the rough times than to tap into that message?” There may have been some delays in bringing her documentary to the world, but as the old Jamaican saying goes, nothing before the time.