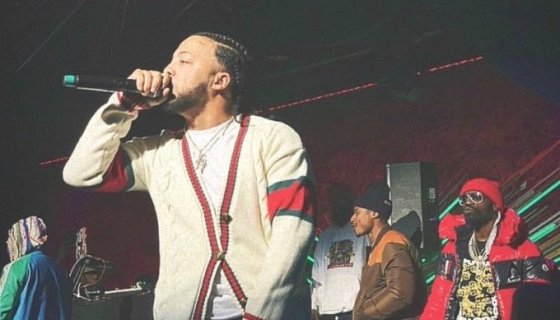 We’re a bit late in getting this review up, but you can blame us for being slow due to the fact we’re still unpacking the elite skill level of Stove God Cook$. The Syracuse, N.Y. rapper and singer recently unleashed Reasonable Drought, easily one of the year’s best albums to date featuring expert chemistry between Cook$ and .

Some might remember Stove God Cook$ under his first stage name, Aaron Cook$, and he delivered a standout performance in the BET Jams Flipmode Meets The Conglomerate cipher from 2018. Fans of Griselda may also know of Cook$ from his guest feature on Conway The Machine’s “Ghost Musik” that also featured Conglomerate honcho Busta Rhymes with production from Nottz.

Over the past few years, Cook$ has perfected his craft, culminating in his proper debut album. Produced entirely by Roc Marci, Reasonable Drought cleverly plays on the title of Jay-Z’s debut album, Reasonable Doubt, although that’s where the similarity ends.

Coke rap reached its zenith the capable hands and descriptive lyrics of Pusha-T, but Cook$ breathes new life in the subgenre by utilizing his gift for melody and stirring vocals. However, he isn’t a Max B retread. Instead, Cook$ employs a relentless, aggressive flow that is highlighted from the onset with the album’s opener “Rolls Royce Brake Lights,” and the hook is pure ear candy. Cook$ doesn’t ease up with the following “Bread Of Life,” an early highlight, and Marc’s track is as menacing as Cook$’s hungry rhyme delivery.

On lead single “Break The Pyrex,” Marc employs his familiar pimp-strut funk for the track and Cook$ matches the production with another memorable singing hook before diving in headfirst lyrically. Cook$ follows the strong track with the equally dope “Jim Boeheim,” named after the Syracuse University’s men’s basketball coach. Marciano’s track sets the tone but Cook$ elevates the listening experience by sheer will alone.

“Crashed a rented Hyundai, I feel like Kanye/Runnin’ the base like I play for the Padres/It’s Mr. God Face, they hope my mind break, my third eye awake/My b*tch vegan, my closet full of skeletons, my garage is possessed by a demon/That’s when the Ghost is in it, tell the record label they get no percentage/Mix the coke with baking soda, Shoulder Leanin’ in the pot, they thought Young Dro was whippin’”

Thematically, the album doesn’t stray far from the grim and gutter realities of street life, specifically the hustling aspect. But what keeps the approach consistently fresh is Cook$ and his penchant for vivid imagery present in every verse on the album. That feat is more impressive as he lyrically carries the album on his shoulders by his lonesome, and that translates when he breaks into song as well.

And while a Marciano verse would have undoubtedly put the project over the top, the production is some of the best we’ve heard from the Long Island talent to the point where it feels like Marcberg is right there with Stove God calling the plays.

Across 12 tracks, we don’t learn much about Cook$’s life outside his fanciful street tales and the struggles there within, but perhaps that’s all he needed to express on this outing. With his range as a vocalist and writer, Stove God Cook$ should enjoy a lengthy career based on this effort alone.