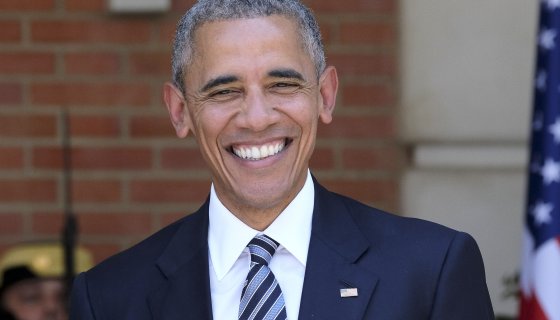 Of all the topics to trend on Twitter, few would have expected that would be connected to a -related topic of discussion. A video of a young person claiming they encountered someone selling “Obama Runtz” has gone viral on the social media network and has inspired laughs and even some praise for 44.

The video went viral after Twitter user @MoolLifeMb shared a video of the person, presumably walking around New Orleans or Atlanta, and then shared what has become quite a moment as a result.

“A n*gga walking around Magnolia talking about he got Obama Runtz. I ain’t never heard of no Obama Runtz a day in life, and I ain’t even know Obama condone sh*t like that,” the person says in a thick southern accent.

The person continues, “And got on a fat ass 4PF chain, I don’t know if he Lil Baby big homie or what.”

For those unaware, 4PF (Four Pockets Full) is the name of Lil Baby’s label and streetwear line. According to comments below the video, the person in the video is a woman named Kayla but we’re unable to confirm.

According to Leafly, the Runtz strain is from Berner’s Cookies lineup and is a combination of the Zkittlez and Gelato strains.

Because of the popularity of the strain, bogus versions of Runtz have flooded the street-level market in droves and the Runtz strain name has also been tied to the rash of poorly manufactured cannabis concentrate cartridges that nearly upended that portion of the industry last year.

Across Twitter, folks are having a good laugh over the clip and even claiming they “got that gas” while others are missing the joke as Obama Runtz is trending under politics. We’ve got the best of the Twitter reactions below.

I’m crying cause Obama Runtz is trending under politics 😂😂😂 ppl gone wake up so confused pic.twitter.com/a5D6pZhUyV

pls let me know if you know where to procure the obama runtz pic.twitter.com/mRoJ2K6RtK

someone’s running around the magnolia apartments(i think) saying they have “obama runtz” out for sale. she did not know obama condoned anything like that & the nigga selling the runtz has a 4PF chain(Lil Baby’s label) She thinks it must be Lil Baby’s big homie 😂

"Obama Runtz" is that some new kush? That shit sound like some fire. pic.twitter.com/zsDGtnVEX5

me and the homies discussing the new obama runtz pic.twitter.com/T4Xo4m4JQg

Obama Runtz the opportunity to remind ya'll the Scooby Doo gang was a bunch of stoners 🍁 and we never noticed pic.twitter.com/c2banUttzR

Twitter: "Obama Runtz" is trending under politics
Me: pic.twitter.com/DHYBLRkClH

I don't know or care what "Obama Runtz" is about.
What I DO know is that Obama WAS, IS and WILL FOREVER BE BETTER than that fat, ugly, orange, incompetent LYING CLOWN BUFFOON that has DONE NOTHING but HURT THIS COUNTRY for the PAST FOUR YEARS. #OBAMAGREAT #TrumpFailure pic.twitter.com/yXJAjECay2

This more appropriate for Obama runtz and fat one? pic.twitter.com/2l9iRGOwqc

Trump supporters are so ignorant that they think making "Obama runtz" trend on Twitter is going to hurt Joe Biden.

I'd take Obama Runtz over Trump Adderall or Trump Hydroxychloroquine any day of the week.

This the pack cover for the Obama Runtz pic.twitter.com/qkhh9a3UnS

Idk what’s more confusing. Finding out Obama runtz is a thing or finding out that is a grown ass woman pic.twitter.com/yxDU776Li9