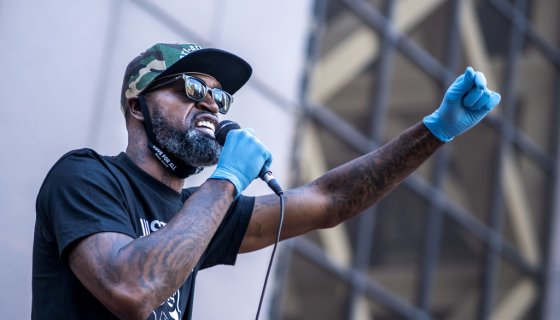 has built a reputation of being unfiltered and passionate about causes dear to him, using his new platform as a podcaster to voice his strong opinions. The former NBA player seemingly defended Philadelphia Eagles star ‘s posting of a message attributed to Adolf Hitler, saying instead that he chose the “wrong words” in his fiery rant.

Jackson sat down with CNN’s Don Lemon to discuss the criticism he’s been facing since stepping up for DeSean Jackson Instagram in a now-deleted video while stating that the NFL player was speaking the truth; DeSean Jackson says he’s a fan of the messaging from the Hon. Min. Louis Farrakhan of the Nation of Islam, long viewed by many as anti-Semitic.

During the segment with Lemon, Jackson brushed off the assertion that he harbors hate towards Jewish people, stating that he was simply attempting to bring light to the fact that the Eagles allowed former player Riley Cooper back to the team after the wide receiver called a security guard the n-word during a country music concert in 2013.

In Jackson’s eyes, the way that the Eagles blasted DeSean Jackson in a very public fashion and demanding apologies contrasted greatly with how they quietly handled the Cooper situation. Cooper was fined an undisclosed amount and allowed to resume team activities.

The NFL joined the Eagles in releasing statements calling the actions of Jackson “offensive” and the Eagles leadership said in the statement that it vows to take “appropriate action” against their player. According to reports, it isn’t thought that a suspension or firing is in the cards for Jackson.