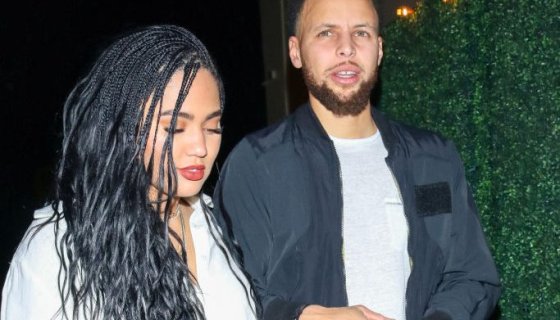 might not be a symbol to some but that doesn’t mean he can’t put on for his wife, . Fans on Twitter and Instagram alike have been remarking on an especially racy (for them) photo that had folks wondering aloud if the couple is relationship goals or if they’re doing too much.

The photo features a shirtless Curry, who is currently nursing an injury, picking up his bikini-clad wife while grabbing two handfuls of cheeks. Mrs. Curry is seen licking her husband’s face, and looking amazing to boot might we respectfully add. Some savvy folks online also noticed something else, but we won’t ruin that moment for the readers.

The photo has gotten some reactions across the two aforementioned social media networks, with some of Curry’s NBA’s peers saluting the photo’s daring declaration of love. But because Twitter is the kind of place it is, some fans aren’t all that enthused about the Currys getting y with each other. We must say that props to Mr. Curry for claiming his woman out loud and proud as he should.

Vacation vibes with my one and only 😍 like dat!

Happy Vday babayyy! You are all the adjectives and more. Love you! “He who finds a wife finds a good thing!” 😍

Logged on IG and apparently steph and Ayesha ready for baby #4 pic.twitter.com/3kwdMpPf6K

Steph and Ayesha look like they have to Yolanda Adams greatest hits.

These steph and ayesha jokes are funny and all but let a girl lick my forehead like that and I’m pic.twitter.com/bkqqWtC6IJ

nothing about steph curry and ayesha curry is y.. they belong on christian abstinence billboards

Ayesha and Steph Curry is not an unattractive couple, but i feel like don't nobody wanna see them try to be y💀

Steph curry and ayesha make me uncomfortable. It’s like they’re supposed to be virgins but are not.

Someone had to take that picture of Steph and Ayesha

Steph and Ayesha bouta just say fuck it and drop the tape on the gram pic.twitter.com/QR511BArD4

Do y’all think Steph and Ayesha are virgins??? People really talking about this goes against his image!! 🤣🤣🤣🤣🤣🤣

I demand Wardell to delete that thirst trap expeditiously.

Can’t even look at Ayesha like that anymore, Steph damn near family at this point tbh

Steph got a stiffy not surprised tho it’s Ayesha