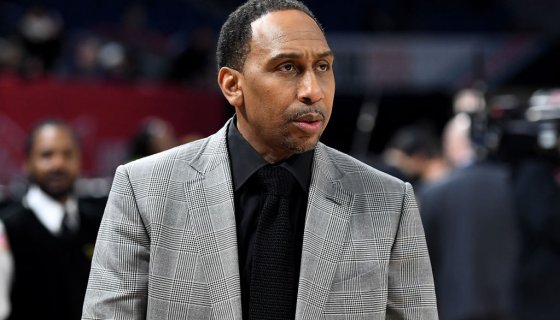 is seemingly down with Laura Ingraham’s “shut up and dribble” gang, this after he went after NBA players opting to fight racial injustice instead of lacing them up. The ESPN host singled out , Dwight Howard, and others who have stated that Black lives matter more than basketball, but Smith unloaded on the players which prompted slander heading in his direction.

Irving said a call between NBA players last Friday that, “I don’t support going into Orlando. I’m not with the systematic racism and the bullsh*t. Something smells a little fishy.”

Howard backed up Irving, saying, “Basketball, or entertainment period, isn’t needed at this moment, and will only be a distraction. Sure it might not distract us the players, but we have resources at hand majority of our community don’t have.”

On ESPN’s Get Up! program, Smith launched into one of his classic impassioned rants in response to both Irving and Howard stating their position on why the NBA season needn’t resume. Smith stated that the pair would have been more within their rights to not play this season due to COVID-19 concerns, but stopped short of giving credence to their reasonings for wanting to sit out.

Smith ended his salvo towards Irving and Howard, stating clearly that they can, “can fight the fight while still showing up to work.”

As it stands, Smith’s argument for players returning back to work despite their valid concerns for not wanting to do so has garnered a response from Twitter who have collectively let Smith know how boneheaded his stance was. Check out those reactions below.

Certain things just don’t make any damn sense. This is one of those things…..what Kyrie and D-Howard are saying. And don’t y’all worry. I’m back on @FirstTake TODAY! Enough of folks getting away with this nonsense. Here I come! pic.twitter.com/ttR5OJ9eO7

Max Kellerman "Rioting in their own communities? Black people don't own those communities" pic.twitter.com/YQXquGkDXm

Bruh stephen A smith does not speak for a majority of black people. Dude has been on some real uncle Tom shit. He wanna talk but he never believes in change hes comfortable in the situation hes in. But most of us arent. He has the house nigga mentality n it's sad. Dude would pick

Why does it feel like Max Kellerman, a white man, has a much better understanding of this whole thing than Stephen A Smith?

You notice the following have called out Kyrie Irving

when Trayvon was murdered, Stephen A got on tv and said he shouldn’t have been wearing a hoodie. When Ray Rice literally knocked his wife out, Stephen A said, we don’t know what she did to provoke it. He has shown us who he is. Believe him.

Stephen A and Max on first take whenever they have debates about race pic.twitter.com/cUJ1Ni13Rt

Stephen A gets paid to talk bout sports. If Kyrie and Dwight Howard pushes this solution to fruition, then it affects Stephen A’s money. Self preservation is taking over. No matter how you look at it…

Kendrick Perkins , Stephen A Smith and Matt Barnes got y’all thinking Kyrie trynna cancel the season to stop Lebron from getting a ring lol y’all more woke than Kyrie