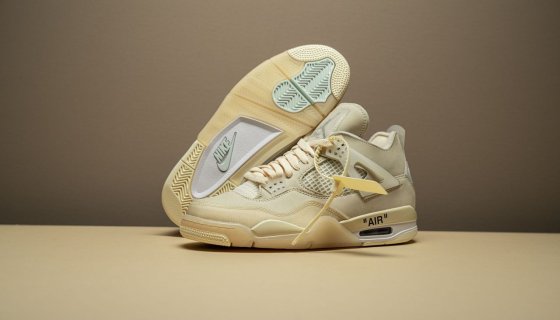 When it comes to releases the sneaker world prepares for the tattoo tears that come with the L’s on those Saturday mornings and though next week’s release is for women, many men will be wishing death on the Nike SNKRS app.

On July 25th the highly anticipated Off-White Air Jordan IV “Sail”‘s will be releasing draw on the app and other participating retailers, but Stadium Goods has already got you covered if you have a King Kong grip to spare. For a cool two grand, the 2020 grails can be yours and with its cool colorway and slick design, the Off-White 4’s are sure to keep you crispy throughout the summer of 2020.

The kicks were first seen as a sample at Abloh’s Figures of Speech exhibit in Chicago’s Museum of Contemporary Art back in Fall 2019. All the Virgil cues are in effect on the shoe as its proper retail release nears.

The signature “quotations” aesthetic of Abloh’s Jordan Brand collaborations underpins this Sail colored shoe, including “Air” branding printed on the midsole and “shoelace” detailing in black lettering on the laces. Translucent detailing, including the heel cup, Wings clips on the collar, and netting on the midsole and throat are all firsts for the Jordan 4. The visible Air window in the heel is surrounded by a white midsole.