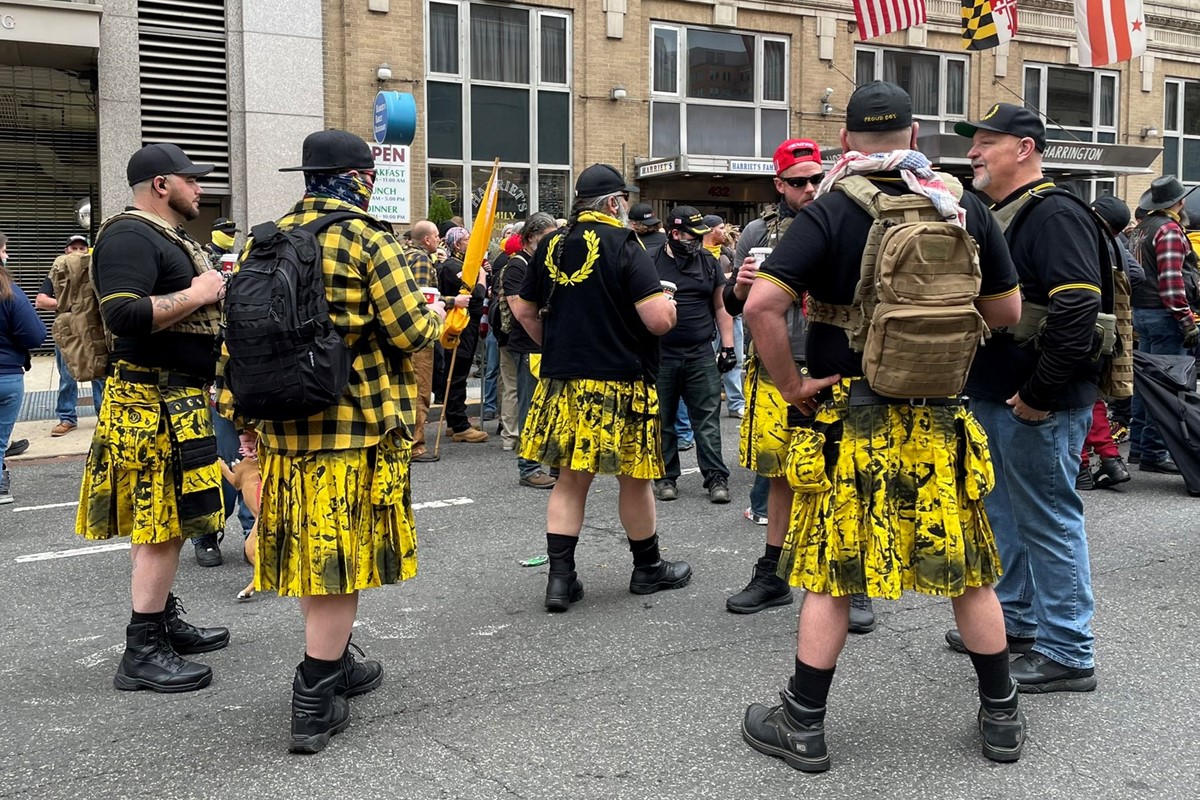 The Virginia-based clothing company Verillas has denounced the alt-right group, donating proceeds from the kilts and more to civil rights organisation NAACP

According to the Washington Post, at least four people were hospitalised with stab wounds around a gathering point for the alt-right organisation the Proud Boys. Many members of the Proud Boys also marched through the streets, wearing helmets and bulletproof vests, as they previously did at November’s “Million MAGA March”. Yesterday, they chanted slogans such as “all lives matter” and openly flashed white supremacist hand signals.

The image that has been seared into many observers’ memories though (for better or for worse) shows a group of Proud Boys in matching yellow and black kilts, along with their unofficial uniform of appropriated Fred Perry merchandise.

Shared by NPR journalist Hannah Allam in a Twitter post, the image has provoked thousands of comments, with reactions ranging from anger at the appropriation, to ridicule, to straight-up disgust. There’s also a second image of the Proud Boys baring what’s underneath if you dig a little deeper (probably best not, tbh).

Proud Boys in kilts. Dozens of them gathering downtown now for today’s March for Trump. pic.twitter.com/BTJWmGC6Yp

It’s thanks to Allam’s post that the original designers of the kilt caught wind of the Proud Boys wearing their clothing. The Virginia-based company, Verillas, promptly distanced themselves from the association.

“We roundly denounce any association with these individuals and the hatred they stand for,” writes the company in an Instagram post. As the post points out, Verillas is an LGBTQIA+ owned and operated company, which places it “in direct opposition” to the Proud Boys, a self-described “Western chauvinist group” that often engages in homophobia, sexism, racism, and violence.

Speaking to Dazed, Verillas’s VP of Marketing, Justin, explains how it felt to recognise the label’s kilts on the Proud Boys. “In the first moments I thought we were doomed,” he says. “I was looking at the scope of the replies and despairing at our lack of size and lack of voice. I had no idea how it could have happened – I felt like our views were transparent from our site.” (For the record, Verillas sells multiple Pride-themed kilts, with rainbow, Trans Pride, and Bi Pride colourways.)

“It was insane to me that folks in that group could have used our stuff.”

However, the despair didn’t last long. “Within the first hour my feeling of powerlessness was gone,” Justin adds. Along with Allister Greenbrier, owner of Verillas, his instinct was to “turn the tainted money into something for good”. Spotting $750 worth of clothing in the picture, they donated $1000 to the NAACP.

“It felt existentially wrong to be associated with that group of people and the first thing I realised is that taking gains from them was unacceptable,” he says. “We weren’t satisfied with neutralising the situation, we had to counter it.”

Since posting the receipt for the donation to social media, the label has been flooded with messages of hope and support. Some users have also shared anti-Proud Boys messages in Verillas’s Pride kilts, recalling that time the LGBTQ+ community hijacked the Proud Boys hashtag on Twitter. “The reaction online has been incredible,” says Justin. “I feel like we got folded into the arms of an understanding and empathetic world.”

Still, Verillas has been forced to discontinue its yellow and black kilt, just as Fred Perry stopped selling its iconic polo-shirts in the US earlier this year, due to their extremist associations. “It hurt to do because we don’t like the idea of losing any ground to bigotry – the idea that they can just snatch up whatever they please and ruin it feels deeply wrong,” says Justin. “But at the same time I didn’t want to sell that product to folks who would unwittingly associate themselves with an awful movement.”

Verillas does intend to bring the kilts back in the future, though. “We’ve got plans to modify them and reclaim them,” he explains, “in a way that can enhance our defiance.”