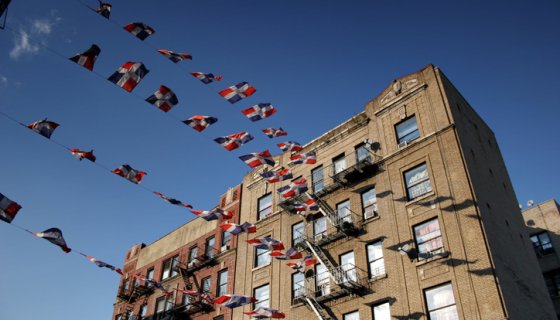 Even as the there are folks who still need a serious education. Some members of the Dominican community in upper Manhattan are in denial about their roots.

On Tuesday, June 2, started trending on Twitter for all the wrong reasons. Yesterday, a video was captured of several individuals chasing out Black protesters from the Dyckman area which is synonymous with the Dominican culture.

While some say the intent was to detract looters from vandalizing their local businesses there were some people who are clearly shown using racists terms and denying they are Black. Naturally, this did not sit well with Black people, Afro-Latinos and thankfully select Dominicans who know the math.

This video was recorded in the neighborhood of Dyckman, New York last night. This video shows, mainly, Dominicans yelling out the word “n*gga” and are reportedly going against the #BLM movement.

For those not in the know, the Dominican Republic shares Hispaniola Island with Haiti. Recent reports estimate that 85% of Dominicans have African ancestry. Less than one percent show that they have ancestry from Europe. While skin tones vary a large portion of their community is dark-skinned—see MLB slugger David “Big Papi” Ortiz for example.

The denial is largely attributed to their former dictator Rafael Trujillo. During the 1930’s, Rafael Trujillo accepted Spaniard and Jewish immigrants into the Dominican Republic following its civil war to help whiten its population. He encouraged Afro-Dominican’s to marry the Spaniard immigrants and vice versa for “ethnic cleansing.”

Around October 1937 is when Rafael Trujillo carried out a massacre against Haitian’s living in the Cibao region of northwestern Dominican Republic. Approximately 35,000 Haitian’s were killed in that massacre. Almost 90 years later the color-ism remains a sore issue within the Latino narrative.

You can view some of the best responses to the fail in Dyckman below.

Black communities stood by #Dominicans when Junior was killed. Remember that. pic.twitter.com/V13EW6Ocgw

my Haitian ass waking up to see that dominicans are trending for being anti-black pic.twitter.com/5Bb7qdomVc

We shouldn't have to tell Dominicans they're Black. They should be proud.Haiti is the only nation with a successful slave revolt. We defeated the French and helped DR.Even the US were afraid the slaves here would revolt also so they black listed us along with France. #Haiti

I'm seeing some #Dominicans saying "I am Black, I am Taíno" and I am like:

1) Very few indigenous people were left after 50 years of Colonialism in the Dominican Republic.

Me: But you’re saying the n-word.

Me: So you agree, you’re black ? pic.twitter.com/b5Sb9uEbxZ

Me: if there were only 2 choices would you #Dominicans accept your blackness or remove yourself from this planet
Dominicans: pic.twitter.com/BN4zLZkQwx

To the Dominicans #repost pic.twitter.com/3rzxFlsW5P

I am the first to call out my people when they do or say some racist shit. However, consider the following: Fordham is just across the bridge and it was straight violated. There are dozens of videos online showing the crowd mo ving from 145 towards uptown leaving destruction