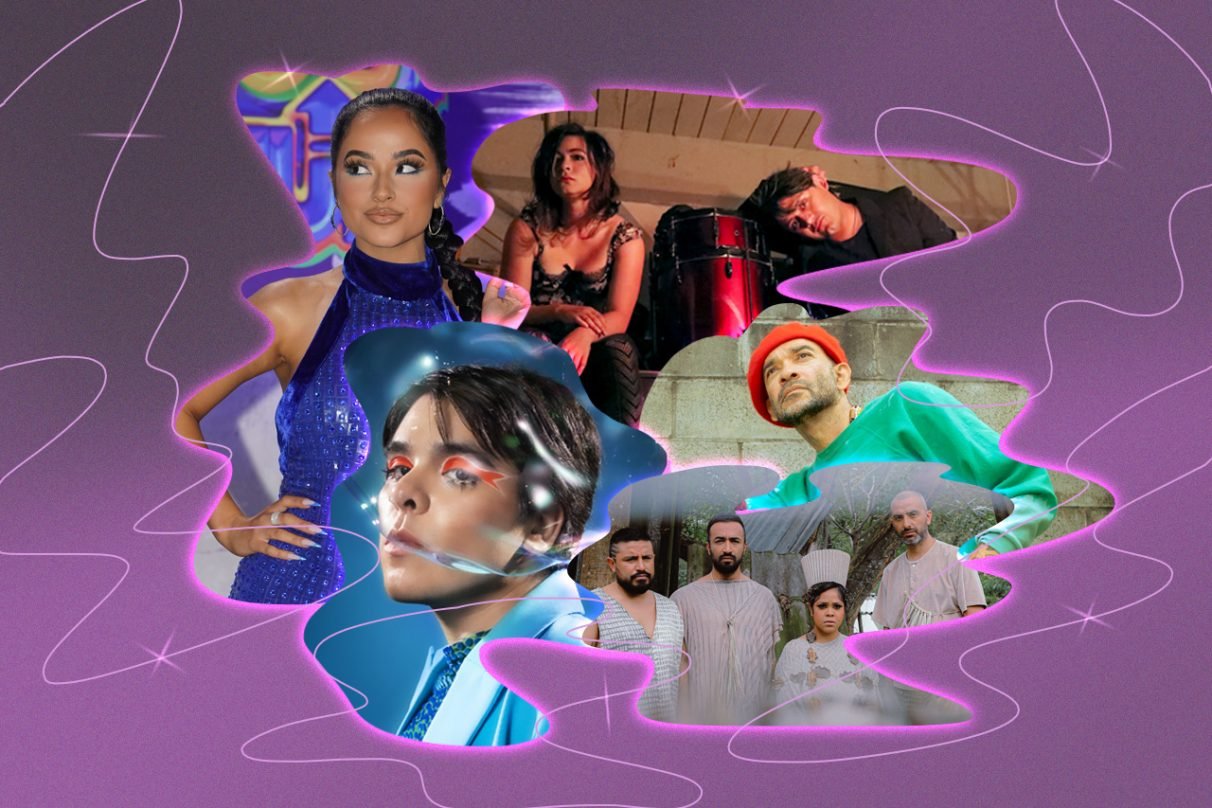 There are no tears to be found on this recounting of love stories gone awry. Sofia Reyes and Becky G collaborate on this cumbia rhythm turned reggaeton beat that finds them dancing away from heartbreak. The only thing worse than losing love is being left to wallow in despair, but the Mexican power duo is here to remind you that recognizing the lessons and celebrating the growth that comes from the end of bad love always goes down a bit easier with some good drinks, good times, and even better friends. –Jeanette Diaz

When done right, genre fusion can feel very exciting. In their new single, Combo Chimbita demonstrates yet again they are masters of the form by maintaining a high emotional pull throughout the dynamics. Over a trip-hop-inspired backdrop, vocalist Carolina Oliveras’ amazing voice haunts the ghastly first half of “Memoria” before everything becomes a cumbia rebajada, exploiting its psychedelic chopped-and-screwed quality to send you into a trip that is equal parts joy and melancholy. –Marcos Hassan

Tres Leches – “Leaving My Light On”

Recalling the raging yet layered guitar onslaught of pre-Nirvana alt-rock luminaries like Pixies, Hüsker Dü, and Wipers, Tres Leches deliver a bilingual anthem about not feeling completely at home anywhere in the world — a sentiment many of us could relate. The interaction between vocalists Ulises Mariscal and Alia D’Alessandro is not so much a call-and-response but comforting each other as they find hope in one another’s vocals. –Marcos Hassan

It seems Colombian-through-Miami rapper Farina didn’t quit the studio during the summer. A few months after releasing an EP with Arcángel, she comes back with a new single. “Nueva Vida” draws from that started-from-the-bottom-now-we-here atmosphere in a before-and-after fairy tale: it’s the story of a rapper that has struggled and eventually earned her place in another league. Or, per the lyrics, otra liga. The single also comes with Lil Durk, whose mumble, high-pitched rhyming style matches the Latine sparkly low-riders featured in the music video. Farina shines most when playing the ice diva in the music video. Rather than being frozen by the cold backdrop, she allows herself to swing around the bars and drops crispy enjambment and melodic lines. –Felipe Maia

Over the past two decades, Curumin has garnered contributions with several Brazilian artists revamping the all-in-one tag MPB—from indie acts to pop singers. With “Púrpuras,” his first solo and new song since the 2017’s album Boca, the musician, producer, and especially resourceful drummer shows that he still knows how to play the frontman role. The single is a whole-hearted, glitter-covered slow jam with a late-’70s blurry aura. Curumin’s falsetto followed by the track’s velvet keys and rounded baseline are an ideal fit to the vocals of the upcoming rapper Nellê. The choir made out by Tulipa Ruiz and Anelis Assumpção, two of those artists stretching the boundaries of the MPB, is both fun and sexy. –Felipe Maia

Under his moniker Los Retros, Mauri Tapia returns with his first song pulled straight from the vaults of the 1970s. Channeling the spirit of the era of notorious Grupos Romanticas, Tapia creates a love-driven ballad dedicated to the unwavering love he holds for his wife. With an intention of creating something you would find on your parent’s mixed CD from the Swapmeet, the resulting track — which also marks the first in Spanish for Los Retros — is one we’ll surely be spinning during a good Sunday morning cleaning session. –Jeanette Diaz

Afro-Caribbean ensemble ÌFÉ have just announced their 11-track sophomore album 0000+0000, and its first preview is a powerful sociopolitical commentary on the US’ very foundations. “FAKE BLOOD” takes shots at topics like gun violence and colonialism, and they hit harder thanks to their unique blend of electronically modified percussion and autotuned Yoruba chants. The official video is a live rendition of the track shot in New Orleans, where frontman Otura Mun currently resides after living in Puerto Rico for 20 years. –Cheky

Victor Internet is on his knees begging for a second chance on “Forever,” the third single from his recently announced new album Blue 2000. Produced by Victor himself, “using real synths,” as he shared on Instagram, “Forever” is Victor’s desperate plea to someone to stay, promising he’s a changed person. Whether it’s true or not, he sounds convincing with his strong vocal delivery, and the song’s slow groove screams “let’s make up and make out.”–Cheky

​​​​Within the ever-expanding realm of corridos tumbados and other visionary Mexican regional music hybrids, the new single from ElArturo is both a remarkable display of nerve and vulnerability. On “El Wey Fui Yo,” a swirling melange of mariachi orchestration, trap kicks, and quirky ukulele sets the scene for a boozy heartbreaker about letting a paramour slip through your fingers and feeling constantly haunted by regret. –Richard Villegas

Rising Reynosa rapper and producer Smith has been cutting his teeth for years with a gang of border-based collaborators seemingly one-upping each other on every new drop. “Confiésame” is the latest entry in Smith’s dejected lover boy saga, delivering a longing, atmospheric trap jam about the frustrating misunderstandings that keep lovers from vibing on the same frequency, no matter how hard they try to synchronize. –Richard Villegas