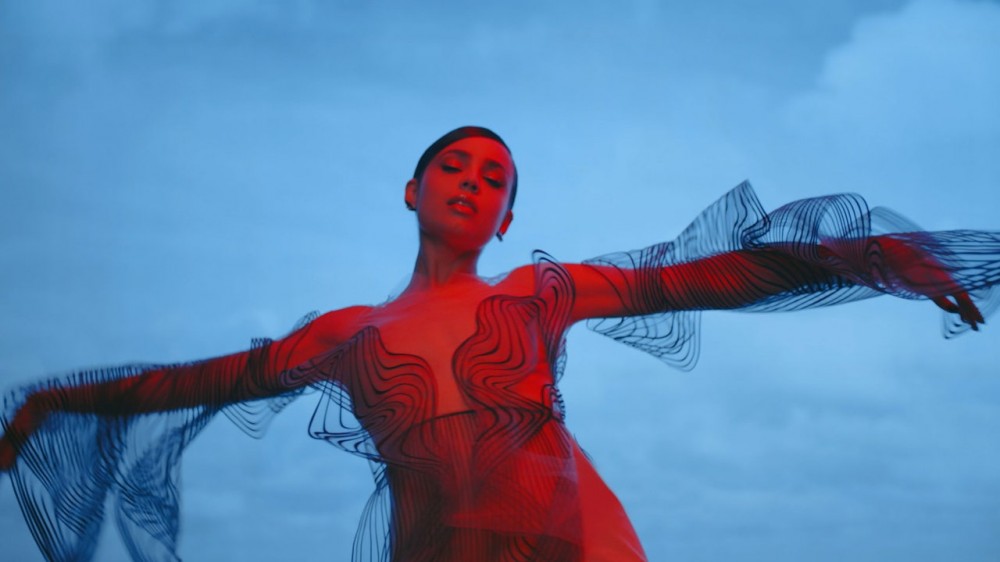 Pop stardom is about reinvention. Since Madonna set the standard for chameleonic change in the 1980s, artists have been adapting their style to match their music. For Sofia Carson, who kickstarted her latest era with the release of the ‘Guess I’m A Liar’ music video last week, wardrobe is an essential piece of the puzzle. The actress and pop? singer has made a name for herself in fashion circles thanks to her love of fairytale gowns and runway drama. For major events, she’s the first to reach for crimson tulle Giambattista Valli Haute Couture, as she did at the MTV Video Music Awards back in August, or the shimmering Elie Saab look she chose for the Golden Globe after-parties in January. While you can always count on Carson to deliver glamour, she wanted to showcase a different side in the Hannah Lux Davis-directed clip and illustrate the song’s themes through clothing. “It’s an anthem of heartbreak, survival, and triumph,” she shared on the phone from Los Angeles. “Once we began working with Hannah, it was our goal to capture that, and it was apparent to me that the video was going to be a marriage of pop and fashion.”

With feisty lyrics like “I promised I would love you ’till the day I die, but I’m still alive,” the outfits needed to have an edge, but Carson wanted the shift from the expected to be gradual. “The fashions evolve with the story. In the beginning, you’re seeing me in a piece that is Giambattista Haute Couture which has the ethereal feminine and delicate aesthetic which is a little like something you’d be used to seeing me in,” she explains. “In that moment of the video, the performance is vulnerable…. But for the other setups the [music] becomes stronger and bolder, and we needed pieces that reflected that which is why the Balenciagas, Rick Owens, and Paco Rabbanes of the world were perfect for us.”

Carson and stylist Nicolas Bru took the idea of power dressing and ran with it, choosing sculptural pieces. “So much of this video was about silhouette and structure,” says Carson. “We wanted to show an emboldened, strengthened woman, so when it came to the shapes, and the contrast of the black and white, everything was heightened. I wanted it to feel like I was stepping into armor.” Rick Owens’s pointy shouldered sequin bodysuit, Balenciaga’s glossy black overcoat, and Iris van Herpen’s 3D printed wearable art all feature prominently. As a longtime admirer of Van Herpen’s work, Carson was emotional while putting on the “Aeriform” dress from the designer’s fall 2017 collection. “I’ve been a fan of [Van Herpen’s] for years; I remember watching her shows online and seeing Lady Gaga in her designs,” she says. “To feature couture pieces within the video was important to me and those dresses have such structure and dimension to them; they’re exquisite and yet so bold. As I was stepping into them, it felt as though I was embodying each persona [within the video] and telling separate parts of the story.”

Of course, clothes are only one part of a video’s look, and Carson also switched things up when it came to beauty. A sleek center-parted style by hairstylist Caile Noble replaced the deep side part and ponytail that have become her signatures. The flowing locks were put to good use during a creative dance break, where Carson grooves with multiple versions of herself. “We had the structure in the outfit with the bodysuit and Balenciaga pants, but the hair added motion while “we” danced,” she says. The cosmetics also took things in a new direction, with Carson trying out smokey blue eyeshadow, black cat-eye liquid liner, and dramatic striped lids by makeup artist Karan Mitchell paired with nude lips from her own Revlon collection. “It all reflected and complemented the lines of the clothing,” says Carson. “It’s very different from anything I’ve done before, but even though I was stepping into this character, it still felt true to who I am.”

The edgy style update that features in the video proved so compelling for Carson that she has adopted a similar look onstage. On Good Morning America last month, she performed in a white Alexander McQueen gown complimented by a studded leather harness, then pulled out Balenciaga’s bold knitwear for a virtual concert that same week. For some, wearing such dramatic pieces would be daunting, but Carson is always game for a fashion moment. “It’s been such a privilege to be able to take these art pieces and bring them into the world of pop,” she says. “Whenever I’ve been to Paris Fashion week and seen a beautiful piece from Giambattista or Valentino make its way down the runway, it’s emotional. Fashion makes you feel something, and so does music, so if I can unite these elements to tell a story, it’s what I want to do.”