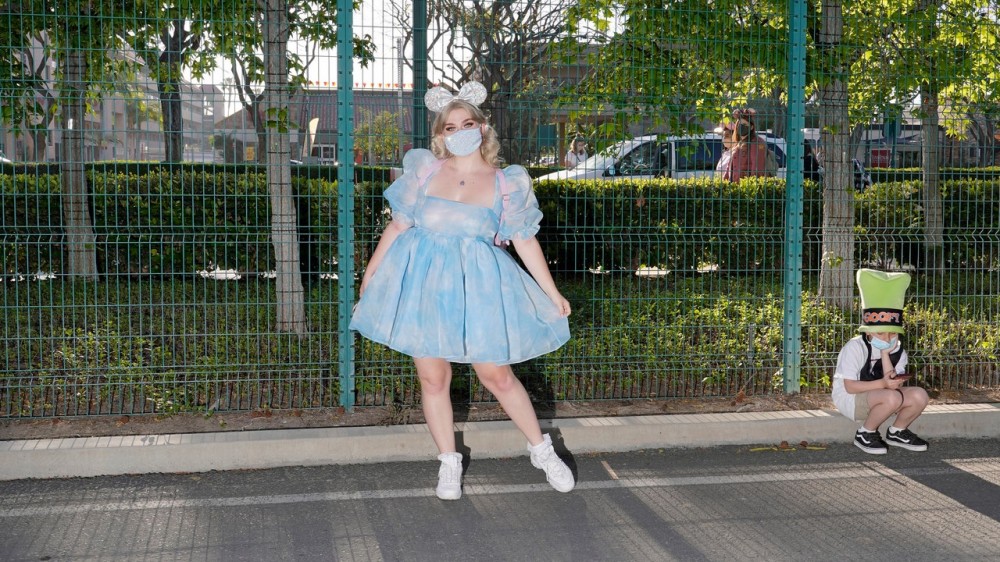 Disneyland officially closed due to COVID-19 in early March last year, as it became clear that screaming on a roller coaster was not going to fall within the CDC guidelines. But this past weekend, Disney fans in California got to dust off their polka-dot Minnie dresses and mouse ears for a jaunt down Main Street, USA. The happiest place on earth is back—just with masks.

It’s been a hard 14 months for Disney’s feverish Californian fan base. The park had only closed on two other occasions: following President John F. Kennedy’s assassination in 1963 and the 9/11 terrorist attacks. Never before had the park been closed for so long. Its reopening, then, is more than a little symbolic of reemergence: a chance to dream, escape, and travel again. It’s not entirely the same—capacity is limited to 25%, and you can’t hug Mickey anymore—but it’s something.

With reopening comes coronavirus-specific merch. It’s popular among superfans to get specially screen-printed shirts for your big Disney trips, or wear cheekily slogan-ed shirts while at the park. Think “My Favorite Disney Villain Is My Wife.” Last Friday, photographer Jamie Lee Curtis Taete captured a whole host of shirts that would not have made a lick of sense the last time the park was opened. “Social Disneying” read one shirt at the park’s reopening day, with the letter O as Mickey with a mask on. Some were more straightforward. “There March 13, 2020, and Back Again April 30, 2021.” A family dressed in red-and-white polka dots took a socially distanced selfie with Pluto.

Not everyone accepted the park’s closure quietly. Taete attended a Reopen Disney protest in October of last year. The argument was that if you could have big stores open, you could have Disney. A laid-off Disney employee told Taete, “I just got tired of seeing all of the sad news on my news feed and I’m like, ‘Well, let’s do something about it,’ so I started this idea, Reopen Disneyland 2020: Let’s open the gates—not just for the cast members, but for the surrounding community.” The rallying cry, “Tell the guards to open up the gates,” a line from Frozen, caught on and subsequently featured on many tees.

Some attractions, like the Downtown Disney malls, had been open since last July, with new safety precautions as well. Governor Gavin Newsom allowed theme parks to reopen in a limited capacity on April 1, but it took some time for Disney to recall and retrain employees. But now? They’re ready to have fun again. As one marquee read, “Welcome Back! You’ve Been Missed!”