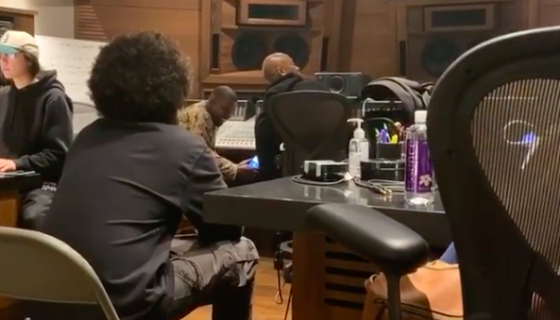 may be blessing fans with a new collaboration with and , but the project has left some fans calling the Cali legend out.

On Sunday (Jun 28), took to Instagram to share news that he was in a studio session with and  over the weekend, presumably to work on the highly anticipated sequel to Jesus Is King, which Kanye recently confirmed is coming soon. In the video, Snoop gives fans a preview before noting that the music he was previewing was from Kanye.

After setting the internet ablaze with the snippet, Snoop posted another picture of himself in studio with Dr. Dre with the caption, “Bac2gether again 🎧🤜🏾🔥💯🎙,” prompting rumors tha Dr. Dre was finally working on his highly anticipated and long awaited album, Detox.

Although the news of Snoop being back in studio left the majority of fans rejoicing, some took to Twitter to call the Long Beach OG out for his hypocrisy of working with Kanye, who he trolled and called out for his political views and support of Donald Trump, after calling for a boycott of the rapper.

In 2018 during an interview with VLAD, Snoop Dogg expressed his strong feelings toward Trump supporters, which included Kanye. “If you like that n***a, you’re motherf*cking racist,” Snoop exclaimed. “F*ck you and f*ck him…Kanye too, n***a, don’t forget about him too, f*ck you too! Throw him in the bag ’cause he right with them motherf*ckers.”

Although it appears that Snoop has put his political differences to the side, Twitter wasn’t so forgiving after fans began calling out Snoop for the hypocrisy for working with him.

“F*ck snoop dogg,” one fan wrote. “He’s the biggest hypocrite. He was talking all bad about Kanye when he was wearing MAGA hats now he’s in the Stu with him? Lame as hell.”

Fuck snoop dogg. He’s the biggest hypocrite. He was talking all bad about Kanye when he was wearing MAGA hats now he’s in the Stu with him? Lame as hell https://t.co/weQUK2xwRL

While Snoop has yet to respond to the backlash, he did take time to address his feelings about Kanye and his political views, noting that he doesn’t “hate” Ye’, just the system that “uses him.”

Check out what fans had to say below.

Snoop Dogg talking bad about Kanye for 2 years just to end up in the studio with him and Dr. Dre: pic.twitter.com/y1NmUXJuwL

Snoop Dogg shitted on Kanye and Kim for 3 business days and now he's on Instagram saying "WE MAKING MOVIES !!!!" in the studio, this is nasty. https://t.co/DfDiYTu2C7

Ya remember when snoop dogg was talking hella shit bout Kanye, now he in the studio looking like a groupie? 😂 clown

This nigga snoop dogg doesn't have a character…. Months ago he was calling kanye all bad names, now this nigga sayin kanye west got some hot music shh….. Smh

That nigga Snoop Dogg shouldn’t be anywhere near Kanye West right now. All that shit he’s talked about him & his wife? Mannnn Kanye is a better person than me cause I would’ve had to pull up on bruh. Say one more word about my wife & it’s gon’ be a misunderstanding ‘around here.

Look at snoop dogg being humbled by Kanye’s presence after talking shit on the man like no other.

Looks like Kanye, Dr. Dre, Snoop Dogg, and their teams were in the studio until around 5am last night. 👀 #WESTWEEKENDEVER pic.twitter.com/tQx7ayYcO1

@SnoopDogg really? @kanyewest of all people to be hanging with. Trump supporting idiot. When you support a thing like that in our “commander in chief”, you a piece. Why be associating with that?

Snoop Dogg forgave a killer like Suge Knight so why is everyone surprised that he is suddenly friendly with Kanye? pic.twitter.com/nFIYfoLwcH

Snoop Dogg does random TV endorsements these days, working with a house nigga like Kanye West is on brand for him 😂 it’s all about money don’t be naive

Really??
Did you play in the front yard of the crib where you fell down and bumped youre head or what???

Sorry Sn👀p, what the f… makes you to work with kanye west, do you still have your soul? pic.twitter.com/ohFf9a0UJL