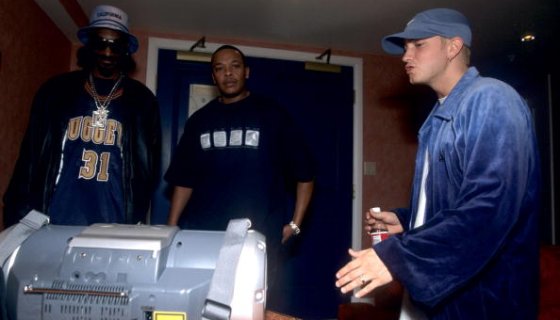 has earned the right to be a stern critic of his peers given the fact he is a living legend in the realm of Hip-Hop by all accounts. In a recent interview, the Doggfather rightfully gave praise to as a top-tier lyricist but says he doesn’t even crack his top 10.

Sitting with The Breakfast Club, the D-O-Double-G spoke his mind as he’s known to do regarding his mentor and producer, Dr. Dre, who gave the Long Beach, Calif. OG his big break back in the early ’90s and broke the career of several other artists after his tenure with N.W.A. was in the rearview.

When the conversation turned to Dr. Dre’s massive influence and legendary status as a producer, Snoop passionately championed his longtime friend by noting his ear for talent and how he rose to the challenge of improving upon his skill set. In the midst of this discussion, Snoop landed on the fact that Eminem, sharp as he is, will never be over the top of some of his favorites.

“Eminem, The Great White Hope! White rappers had zero respect in rap. Let’s keep that one thou-wow,” Snoop shared, all while puffing some signature “medicine” as he’s known to do. “[Dr. Dre] has probably put Eminem in the position where he would be considered one of the top 10 rappers ever.”

Snoop added, “I don’t think so, but the game feels like that he’s top 10 lyricists and all that that comes with it. That’s just because he’s with Dr. Dre. and Dr. Dre helped him find the best Eminem that he could find.”

Check out who Snoop Dogg does think is better than Eminem. We have a feeling that Eminem, who Snopp called a brother, would even agree.