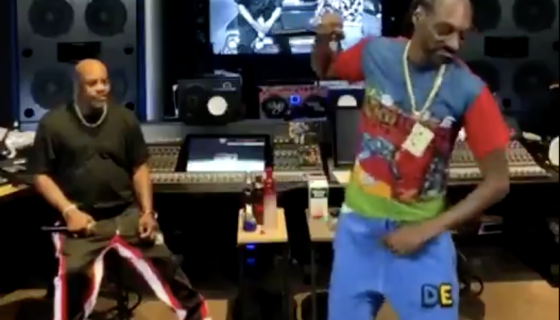 The highly anticipated battle between and went down and they definitely went hard for the culture.

On Wednesday (Jul 22), took place on Instagram, with the high energy event opening with administering a heartfelt prayer. Kicking off the event with the classic records that changed that game, dropped the breakout track that put him on everyone’s radar, “Deep Cover”. Not one to start slow, DMX countered with his energetic and gritty intro to his classic album, It’s Dark and Hell Is Hot.

The highly anticipated #Verzuz Battle between #SnoopDogg and #DMX has kicked off with X kicking off the ceremony with a heartfelt prayer. Watch live NOW Apple Music or the official Verzuz IG Live!

After the battle was well underway, the two dropped their classic hits with similar themes for the first round, with Snoop dropping “What’s My Name” as his second track with DMX countering with his own track, “What’s My Name”, getting the battle crowd hype.

The #Verzuz battle between Snoop Dogg and DMX is well underway with the two dropping their classic hits with similar themes for the first round! #Snoop kicked off his second track with “What’s My Name” and #DMX countered with his own track “What’s My Name” getting the battle hype! Tune in NOW Apple Music or the official Verzuz IG Live!

During the match, the two living legends ran through their hits, while praising each other and serving as one another’s hype man to continue to spread love. DMX revealed that he was inspired by Snoop to write “Get at Me Dog,” and later, sang along to Nate Dogg’s hook on “Ain’t No Fun.” Snoop Dogg shared the same sentiment noting that X’s street anthems were some of his favorites.

While many were showing love in the comments for DMX and Snoop, many fans couldn’t help but notice a few comments from calling out the Princess of Murder Inc., , for a special battle of their own.

Overall as most of the iconic matchups, the majority vote culture declared the culture a winner, but there were still fans who stood by their prediction of declaring Snoop the clear winner.

DMX & Snoop on this Verzuz battle. The culture won. 🔥 pic.twitter.com/XD6K9xIT2V

After treating fans to their diverse catalogs, the two Hip-Hop legends surprised fans with an impromptu freestyle session with both MCs proving that they can still run with the best of them.

Did you catch the impromptu freestyle session that #DMX and #Snoop has after their #Verzuz battle?! #SnoopDogg is showing that no matter how old you are, as long as you keep working that muscle, it will operate with perfection. Snoop:🎙🎙🎙🎙🎙 DMX: 🎙🎙 (but he was getting there, his asthma was just kicking his ass so it’s understandable.)

Either way, the legendary showdown served as a reminder of just how much the two dogs have contributed to the culture.

They keep saying rap is a young man’s game and then Snoop and DMX give us this. Dopeness has no expiration date. #Verzuz

The Verzuz beat battle series was launched by Swizz Beatz and Timbaland back in March as a friendly competition between the two super producers. Each iconic contestant in the battle plays a snippet of their music, with the Instagram Live audience scores each song for 20 rounds to ultimately determine whose back catalog reigns supreme. Previous Verzuz battles include Teddy Riley vs. Babyface, Erykah Badu vs. Jill Scott, Fabolous vs. Jadakiss, Ludacris vs. Nelly, and T-Pain vs. Lil Jon among others.

If you missed the battle, check the replay and fan reactions below.

Snoop got me dead 💀 #Verzuz pic.twitter.com/iU79qppEg6

Snoop got me dead 💀 #Verzuz pic.twitter.com/iU79qppEg6

Snoop is a natural showman and entertainer. DMX was just as raw as he ever been. Plus the love and admiration they have for each other. Putting them in the same room. This bound to be one of the best Verzuz.

I love both but snoop KILLED DIS SHIT!!! #verzuz pic.twitter.com/2wp1NL3k1G

Why does this have me in tears 😩 https://t.co/KwQMnODnjQ

Really thankful for #Verzuz – shit is so hard right now and so many of us are stretched to our limits mentally, physically, emotionally. That was a much needed release.

That @SnoopDogg @DMX battle was the best shit EVER let alone 2020….I still couldn't decide who took it…#Verzuz pic.twitter.com/ty9XJFyVyZ

X got Snoop on this battle. And you guys were playing with his name #Verzuz pic.twitter.com/6H9ga25L5Z

Snoop and DMX gave us the best verzuz pic.twitter.com/PsBU1dZL17

Snoop is absolutely floating on these freestyles. #Verzuz pic.twitter.com/8W1HpWoTkY

That freestyle seals the deal. #snoop for the W. Thanks. #verzuz. 🙏🏼 pic.twitter.com/EwyGxs7v3y

Man i am so grateful that these two legends decided to freestyle for us. That’s really love right there #Verzuz

#verzuz not too many people can freestyle off the top like Snoop pic.twitter.com/zWzl5y8fgF