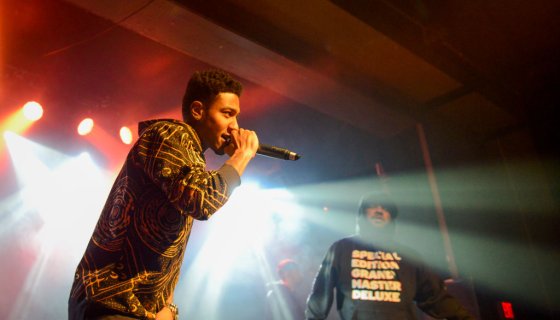 The so-called “blog era” introduced a number of influential Hip-Hop acts — Pac Div, Charles Hamilton, Danny!, Kidz In The Hall, and the duo of and Chuck Inglish as The Cool Kids, among many others. The former Mikey Rocks, who embarked on a prolific solo run before rejoining the group, has unleashed his latest full-length project in Broken Window Of Opportunity, a solid return to form for one of the game’s most original acts.

Rocks, born Antoine “Tony” Reed, planted the solo flag his 2014 debut album Banco but it was his back-to-back EPs Populair and Part 2, released in 2015 and 2016 respectively, that showcased the vast depths of artistry he barely got to tap into in the early 2010s in his freebie mixtape run. In fact, the aforementioned EPs would receive all manner of praise by art rap critics who, for whatever reason, largely ignored those projects when they were initially released.

In 2016, Chuck Inglish announced that the gang was getting back together again Twitter, culminating into 2017’s Special Edition Grandmaster Deluxe, proving that the chemistry the pair first exhibited in 2007 was still intact. After a number of loosies from the duo over the past two years, including the three-song Alchemist-helmed Layups project in 2019, Rocks is once again back on his own.

We last received a solo long-form project from the Chicago native in 2018’s Funds & Access album, which continued the deep dives Rocks took on Populair and Part 2; varied sonic textures, auto-tuned vocals, and atmospheric production that Rocks molded his dextrous styled to with ease. With Broken Window Of Opportunity, Rocks returns to the soil and smoothly spits straight ahead for the most part while still remaining a style innovator.

The album, released on January 17, opens with “Open The Vault,” with Rocks masterfully laying out step-by-step instructions on how to stunt big boy style. The propulsive production from Tye Hill sees Rocks rapping as confidently as ever, and is an effective tone-setter.  The next track “Mo Money” features Shorty K of the T.P.C. and is a return to the luxury bars Rocks became known for in the earlier part of his career. The production from The WatcherZ is another perfect match.

The Mickey Factz-assisted “Art Show” features one of the best hooks on the project and while we won’t spoil it for the readers, it will no doubt live in your head after a listen. Chuck Inglish provides some heat for his rap partner on “Ice Skate” and continues the mellow approach of the tracks that precede it; it is no doubt a single-worthy early highlight.

Other standouts, “Punchin,” the energetic “No Me Toca,” and the subdued “Overload” round out the album’s consistent bent, ending with the reflective “Sometimes” that features Rocks speaking to a former friend and the failure of their connection.

Broken Window Of Opportunity isn’t without some dings in its overall package. There isn’t much of a variation in tempo or energy, but truthfully that’s the only hard knock on the project. It would have been welcome to hear Rocks amplify his capable vocal instrument more than he did on this project. However, the album works so well as a whole and it is among one of the best releases in the early part of 2020 hands down.

Check out Sir Michael Rocks’ Broken Window Of Opportunity below.