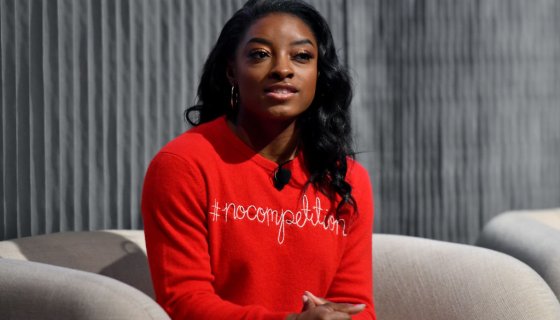 recently enjoyed her birthday, but not before she had to gather the real quick.

On Saturday (Mar 15), the United States Gymnastics team decided to send out a tweet wishing the multi-time Olympic champion a happy 23rd birthday.

“HAPPY BIRTHDAY to the most decorated gymnast of all time, @simonebiles!” USA Gymnastics (USAG) said in its tweet. “We know you will only continue to amaze us and make history!”

Despite being sent to the wrong account and the intention seemingly being sincere—Biles wasn’t having it. She fired back in a tweet, asking the organization to “amaze” her by following up on the ual assault claim made regarding former USA Gymnastics team doctor Larry Nasser who was convicted of ual abusing over 300 women, including Biles.

“How about you amaze me and do the right thing [and] have an independent investigation,” Biles fired back on Twitter.

how about you amaze me and do the right thing… have an independent investigation https://t.co/58Gc9QUk76

Although Nassar is now serving 300 years in prison after being sentenced in 2018, the case noted that women had began coming forward in 2015 and their cries fell on deaf ears for quite some time. After revealing she was also one of Nassar’s victims, Biles voiced her disappointment with USA Gymnastics and how they handled the issue in 2019, noting that the incident has made it tough for her to connect with new staff.

“It’s hard coming here for an organization having had them failed us so many times,” she told FOX reporters back in 2019. “And we had one goal and we’ve done everything that they’ve asked us for, even when we didn’t want to and they couldn’t do one damn job. You had one job. You literally had one job and you couldn’t protect us. They bring in new people all the time and I automatically put my foot up because the people that I had known for years had failed us.”

Faced with hundreds of lawsuits over its inability to protect girls in its care, USAG made a proposal last month that involved settling legal actions for a total of $215 million. The proposal would also release the USOPC, former USAG CEO Steve Penny and former national team directors Bela and Martha Karolyi from further liability.

In late February, took to Twitter to voice her displeasure in the proposal while continuing her request for an independent investigation.

”Ugh at the airport. Heading to team camp. Still want answers from USAG and USOPC. Wish they BOTH wanted an independent investigation as much as the survivors & I do,” Biles wrote. “And don’t THEY also want to know HOW everything was allowed to happen and WHO let it happen so it NEVER HAPPENS AGAIN? Shouldn’t people be held accountable?”

Ugh at the airport. Heading to team camp. Still want answers from USAG and USOPC. Wish they BOTH wanted an independent investigation as much as the survivors & I do. Anxiety high. Hard not to think about everything that I DON’T WANT TO THINK ABOUT!!!

Despite the horrific incident that took place, Biles shared that she is definitely working on her healing; noting that therapy has helped although she’s still taking things one day at a time.

”Everyone’s healing process is different and I think that’s the hardest part,” she said. “Because I feel like maybe I should be healed or this or that. But I feel like it will be an open wound for a really long time and it might not ever get closed or healed.”