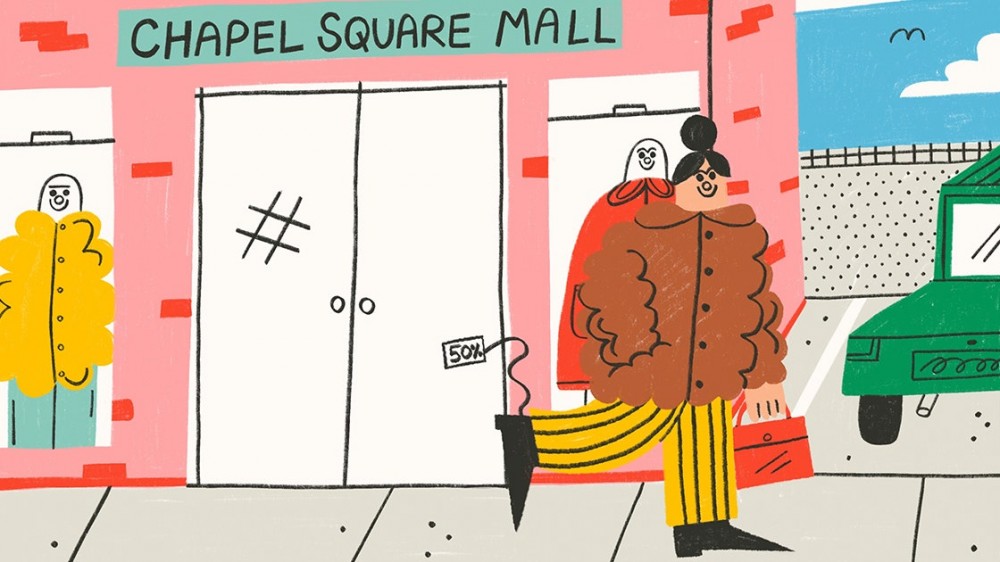 My mother always claims she doesn’t shop. She will stand in the kitchen, while making me breakfast, and will say: “I haven’t bought a new thing in two years.” It’s always two years no matter if those two years have passed or not. Most recently, she tells me this exact phrase while wearing a totally amazing ribbed black tank with “Jamaica” spelled out in rhinestones. It’s something all the Y2K-loving Insta-girls would freak over.

“I bought it at the Salvation Army two years ago.” I instantly want it.

Shopping is actually the only way that my mother can really communicate with the world, and with me. She’s an antique dealer, so whether she can cover the bills and car insurance is dependent on how much jewelry she finds and sells in a given week. Clothes come into play, too. She finds them at estate sales, flea markets, thrift shops, and consignment stores. It’s been quiet though, recently with the pandemic.

The quietness scares me, and I hate the idea of stores closing. Before the pandemic, it was already bad: The holy grail of Massachusetts shopping, Filene’s Basement was boarded up. No more public changing rooms, swinging tits, and heaps of clothes that don’t fit. No more cashmere knits from Italy. No more fancy pairs of tiny underwear individually hung on tiny hangers. And all of the cute consignment stores and boutiques my mom used to frequent just couldn’t wait to be leased, snatched up by some Panera Bread or CBD shop.

And now with the pandemic? It’s gotten worse. The silence is deafening. One of my mother’s last places for shopping, an outdoor flea market, has been put on pause. No more off chance of scoring an original Vietnam-era army olive green jacket or a chic fur coat that someone cleared out from a dead woman’s home. These outlets, a sliver outside of our tiny town, a portal outside of this place, have now dissolved. All must go!

It’s tough for me to reckon with. After all, I like to find out who my mother once was by the same kind of excavation of her clothing. Her closet is bursting with all-things amazing and discounted. Prada patent leather shoes. (She can’t wear them because they hurt her feet.) A funky Moschino Cheap & Chic top. (Really cute cherries on it.) Old leather goods from Ann Taylor. (When it was good.) She actually has been asking me to help her clean it out. She wants to know what is “in,” which I can’t wrap my head around. “Who cares?” I always think. I think her style is radical for our town: A little glamorously askew with luxury cast-offs from my job, and her own goldmine bargain buys from far-flung places like Milan and Paris, or something “Made-in-LA.” That diamond in the rough type of stuff. How could I ever let her part with any of it?

My mother was always oddly polished for a small New England town near the border with New Hampshire. It’s quaint and out of some movie, maybe like Riding In Cars With Boys with impossibly cold winters. There isn’t so much to do and I spent my early teenage years smoking pot in the woods and stubbing out cigarettes behind a pizza parlor downtown. I could never quite wrap my head around how she ended up in the area, so both weirdly beautiful and spectrum-smart, plopping into some no-name corner of Massachusetts. In a Market Basket parking lot, my mom would look completely Hollywood.

Sometimes she’d drop hints about her past through what she would wear. She found a magazine clutch at her flea market. (She carried a similar one to the discos in Boston!) A pale pink polo picked up from Marshall’s. (Her and her friends would double their polo collars like WASPs in the ’70s.) Italian leather equestrian boots from Filene’s Basement. (She’d wear a similar pair, skipping school in New Haven to go with her boyfriend to New York City.)

All of the cute consignment stores and boutiques my mom used to frequent just couldn’t wait to be leased, snatched up by some Panera Bread or CBD shop.

I’ve returned home from New York City, where I now live, for a few weeks, and we take a walk around our neighborhood. I want to take her to the dollar store. On a run earlier in the day, I saw a really great black fleece for $12 dollars. Before we walk there, she puts on a leather shearling-trimmed coat with a belt at the waist that some cool girl-approved Danish label sent to me. She’s totally crazy about it. “It’s so ’70s,” she says—her favorite era. My mom looks ridiculously glamorous, or glamorously ridiculous, in this look, kind of like Cardi B in the milky green leather and Kool-aid blue drenched fur. My mom especially, who is an angelic, inky-haired wisp-thin vision in the pimp coat. In her outfit, she makes us really stick out, like we really aren’t from here.

But it’s freezing and dark so no one notices. We take our time walking, looking at the Christmas lights. People really do them up here, sometimes quite tastefully with lights tracing a column, or with a blow-up Nativity scene in the yard. We are Jews and the only house in town without decorations, besides the people who let their porches fall into themselves. I joke to my mom that we should put up a big fat menorah because it really looks like we don’t give a shit about our house.

As we walk down to the dollar store, we pass by a house on a hill. No decorations. It’s a tiny one floor house that reminds me of a Monopoly game piece. My mom is convinced that an old woman died there recently, and that car in the driveway with Maine plates is owned by someone who has been driving down to clean it out. “Isn’t it nice?” she says. We stand in front of it, guessing how much it will go for. In my mother’s out-of-control jacket, something I’d instantly recognize in a street style slideshow during New York Fashion Week, she is really shining. She reminds me of a doll in front of her dollhouse, if that dollhouse was a postwar two-bedroom home. We leave and get to the bottom of the hill, cross the street, and finally reach the dollar store. It smells like a wild animal in there. I buy a few cans of cat food, her and myself a fleece, and a pair of cotton children’s gloves.

When we’re back, I put on my most prized possession: a black tank top by Lauren by Ralph Lauren from Marshall’s—a defunct line. It is cropped so it shows a sliver of my tummy and has a hot early 2000s square-shaped neck. I wore the thing every day in summer, especially on those blistering days. On dates. With friends. On a beach in Odessa. Out dancing at Brighton Beach. The thing has faded to a dark gray. It was a gift from my mother who bought two of them over 15 years ago at our local Marshall’s. She owns the other.

A few days later, I go to Marshall’s myself—the iconic Massachusetts haven for all-things discount and surplus. The slogan is “Never Boring, Always Surprising.” Marshall’s was actually founded in the town of Beverly, a hop, skip away from me. I’m disappointed when I arrive. The quality has gone down since the time when my mother would shop there. She’d score size zero 7 for All ManKind and Citizens of Humanity. She’s always been naturally super thin, and would stack vanilla Ensure on the top of the fridge, prescribed by the doctor to make her gain weight. He never understood: That’s just how she was. Anyways, her small frame worked in her favor and all of those unsellable sample sizes are stacked right in her closet. Now, when I visit Marshall’s myself, the only things I see are a few overpriced North Face fleeces and a Patriot’s hoodie. What a bummer. I leave with only a pair of bootleg Airpods.

For the past week, I’ve been talking to my mother on repeat about Gwyneth Paltrow’s Cartier Panthere watch in A Perfect Murder. It has a diamond bezel. I talk about how Paltrow’s character has no cuticles and she has a driver that carts her from New York to Connecticut. I’m enamored with the watch that slides up and down her impossibly delicate wrist. I get so entranced that I sit on my mother’s eBay account, spending the night looking up Cartier watches. My mother takes me into her makeshift workshop where she sorts through jewelry. She’s kind of like a miner sifting through the junk for gold. She hands me a Fendi watch with a flaking snakeskin strap that she found in a jar of plastic jewelry from a dealer friend who she met in a Dunkin’ Donuts parking lot.

That’s her antique-dealer friend who runs a shop filled with costume jewelry. I get the strap and battery replaced at a local jewelry shop. I look killer with the watch on and I wear it with the fleece. Moments like these remind me that my mom has such an eye that she can find the craziest things really anywhere. I just hope she finds a fucking Rolex soon to flip.

Before I leave to go back to New York, we have dinner next to her desktop and look at DeadMalls.com. It’s her favorite website. Years ago, she sent me the DeadMalls link with “Best Site Ever” written in the body of the email. The site is low-fi and looks like a hangover from Geocities. The opening photo features a dude with glasses and baggy jean shorts with a Macy’s in the background. He reminds me of some of the schlubby guys my mom works with, a bunch of genius libertarians with nicknames like “Spine” and “Mikey.” We click for hours, and can’t get enough of the gutted insides. On DeadMalls.com, my mom loves to look up her childhood shopping center, a place in New Haven called Chapel Square Mall, where she hung out with a high school boyfriend who looked like a young Carlos Santana. She’d go there after she finished her shift working a job at Burger King, the first one in New Haven. She also tells me about the first shirt she got at Chapel Square Mall: a navy blue polyester button-up with gold buttons. The shirt was the first thing she spent money on. She talks about it like it was a gateway into another dimension beyond New Haven, beyond drawers of practical winter long sleeves and summer T-shirts. She’s totally beaming and doesn’t even mean to be.

A few years ago on Valentine’s Day, darling label of the downtown, Eckhaus Latta showed their Fall 2017 collection at a disemboweled Bolton’s on 4th and 34th. It was one of those eerie moments that made me think, “Hey, I’m in the Big Apple, baby!” I’m sure my mom came to places like this, too, down from New Haven with her Carlos Santana boyfriend. The only thing left in the bare space, windows half-covered with newspapers, were glamour shot posters and an interior that looked like a jaundice-ridden spaceship. After the show, I sent her a picture of every corner of the insides with the subject line: “Happy Valentine’s Day. A dead mall. Love you!” And like clockwork, all the way from New England, she wrote: “I Love It ! More photos. It looks c. 1980 To Me With That Peach Colour Paint. MORE Photos. Thankyou so Much, That Made My Day..So Interesting.” If only we could have shopped there.