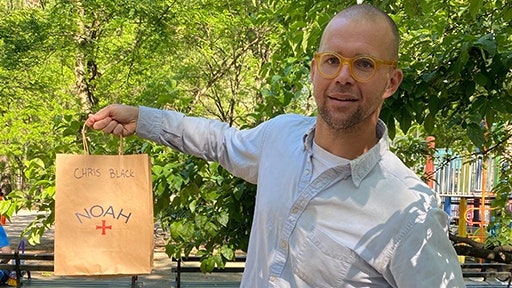 Welcome to Shopping With Vogue, a series in which we sift through a fashion lover’s favorite store. For this edition, we shop with podcaster and consultant, Chris Black a.k.a. @donetodeathprojects at Noah.

On paper, Chris Black reads like many other men in the fashion industry. His consulting company, Done to Death Projects, has seen him work with brands from Stüssy to Thom Browne. He hosts a popular podcast, How Long Gone, with DJ Jason Stewart, which has seen the likes of Phoebe Bridgers, Jeremy O. Harris, and Mickey Drexler participate. (Full disclosure: I have also been a guest on the podcast, talking about Albanian pop stars and getting suspended from high school.)

But the reason why I wanted to go shopping with Black is because I wanted to demystify this fit-loving bro’s aura of popularity. People seem to be obsessed with Black and his takes on menswear. Is it his personal style? When I look at Black, he reminds me of Paul Bunyan—albeit if the mythical lumberjack had a running tab on Ssense. He is six feet four, has a shaved head, wears thick-rimmed glasses, and will casually drop into conversation that he loves Barry’s Bootcamp. In terms of style, Black isn’t a Harry Styles–esque fashion peacock, nor is he a Supreme-obsessed hypebeast. Instead, he leans more toward a lot of button-ups and loafers. So what’s the big deal here?

To answer this question, I began by meeting Black at the SoHo menswear store Noah (his choice, of course). When I arrive, Black sticks out like a sore thumb, having made himself firmly at home by sprawling lazily across a couch. He’s a tall, healthy-looking, broad-shouldered dude who seems as if he grew up on a steady diet of whole milk—and either his head is so large or the disposable black mask is so small, it doesn’t quite fit over his face. The bespectacled giant greets me with his Southern drawl. (Originally from Atlanta, Black is now bicoastal, living between Beachwood Canyon in Los Angeles and New York’s East Village.)

Today, he’s wearing a well-worn light blue Uniqlo shirt with a natural rip in the elbow (he tried to patch it up), a Wilco shirt (he didn’t buy it at a concert, but rather on eBay), Levi’s jeans (“of course!” he says), and a pair of black leather loafers. There are a bunch of young dudes in here in shorts and crossbody bags, and then us.

I mosey around the store with Black, who has his eye on a “split stripe” shirt that is patchworked from different pinstripes. Black calls it a “fake Comme shirt” adding, “Comme [des Garçons] is a little fussy for me and I would feel weird buying it.” (Instead of owning any pieces by the label, he prefers to wear their fragrance.) Returning to the shirt, he describes it as a “Chris 101” piece, adding, “I really liked to wear collared shirts and it just feels good to be in the summer.”

Sure, Black likes collared shirts, but who doesn’t? I’m already struggling to unlock the secret here. What draws him to Noah’s take on the classic piece? He notes that it’s because of the store’s “community” aspect. For Black, the store isn’t just a store, but a place to chill. “This is what a store should be,” he continues. “You can actually hang out comfortably and buy stuff and the guys are nice and it reminds me of going to a skate shop when I was in high school. That’s kind of what record stores and skate shops used to be for me. Now that those are few and far between, this is a better option.”

I can feel that sense of community in the store too. Where other stores “vibe you out,” as Black says, Noah is the type of place that could be succinctly described by the Olive Garden motto: “When you’re here, you’re family.” It’s even clearer when chatting to a few of the store’s employees, who all seem like they’re friends outside of the shop too. (Plus, one kid has his baggy Dickies slashed at the shin with pulled-up athletic socks and Birkenstock clogs. Swoon.) According to store manager Jason Boehm, the appeal of Noah is the same: his coworkers. “It’s very much working with friends, and friends that have turned into family,” he explains.

That sense of tight-knit brotherhood hits home for Black, who was once part of the hardcore music scene, hence why he grows a little misty-eyed at the memories of hanging out at skate shops and record stores. Eventually, Black became the manager of the band Cartel, touring for several years with the group before getting into fashion via the hardcore scene’s footwear brand of choice: New Balance. (That gig was also through music, a friend of a friend’s wife.) To this day, the ties within the hardcore world and its specific adherence to a uniform still trickle into Black’s style in one way or another. “There was such a look to it all,” he says. “Whether it informs it directly or it informs just thinking about it and caring…it was like a certain kind of jeans, a certain kind of T-shirt, and a certain kind of sneaker.”

When Black talks, he’s self-assured and immediately easy-going, which may go some way to explaining why people are drawn to him. “I do think at a certain point, I’m willing to make a call, and I think that is something that people look for today,” he says. “Like, this is good. This is bad. I like this for this reason. I don’t like this for this reason.” (What’s “good” on Black’s list at the moment? A brand out of Ohio called Cowgirl—he likes the name—and Dries Van Noten loafers.)

Sure, there is a freeness about Black and clothes that makes him easy to talk to. He doesn’t necessarily care about how things are made, the story of the fabric or where it hails from, but the broader vibe the garb gives off. He notes that he likes “Clapton in his prime when he was wearing trench coats and penny loafers,” “Harrison Ford in the polo shirt and short shorts,” and a “J.Crew catalog from 1994 mixed with a Spacemen 3 T-shirt from 1994.” Most recently, he bought what he thinks was Sofia Coppola’s CD wallet off of eBay while searching for her defunct line, Milkfed. It was filled with Miles Davis and Air, as well as an invitation to her fashion show. “She embodies something that was very aspirational for a lot of people. Me included,” says Black about Coppola. “She’s a vibe chick.” And to some degree, maybe for the world of bros, so is Black.

Finally, just as I was giving up my search for answers to Black’s mystical appeal, into the store walked two brothers. They quickly made a beeline for Black, before letting him know they are fans of his podcast. (Actually, just one brother approached Black, as the other was “too shy.”) When I asked them further what it was about Black they loved, their answers were surprisingly simple. “It’s just a free, fun conversation that you can listen to while you’re doing work,” said one brother, with the other adding, “He’s not afraid to have opinions.” (Men, so easy to please!) But maybe the answer to Black’s appeal is simpler than it seems: His easygoing nature makes him feel immediately that he’s a lifelong friend, so much so that you’d happily approach him in a store and get chatting without the slightest moment of awkwardness. His fits may be carefully considered, but Black’s charm is surprisingly straightforward—and after today, consider me a little under Black’s six-feet-four, hypnotically friendly influence too.