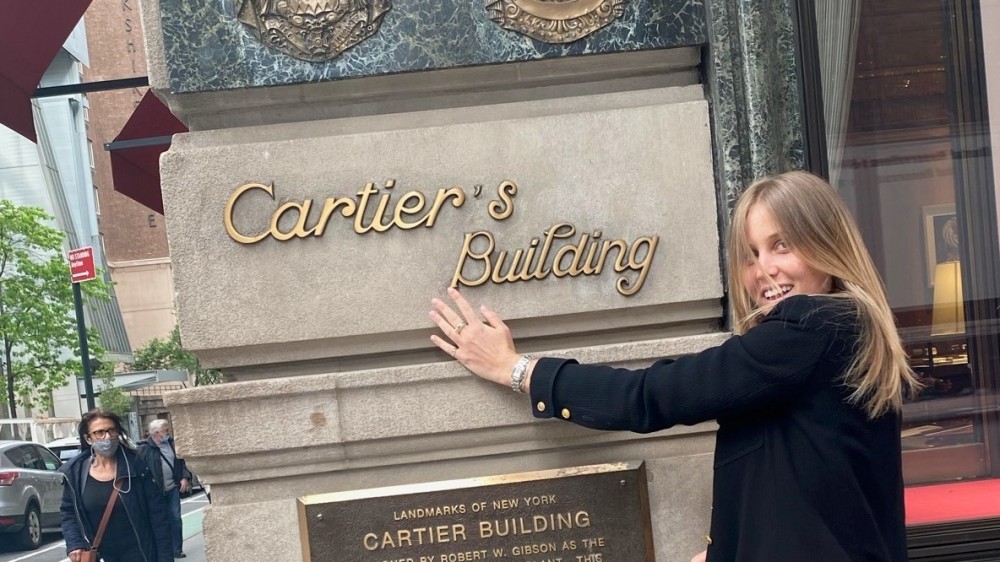 Welcome to Shopping with Friends: a Vogue series in which we sift through a fashion lover’s favorite store.

Brynn Wallner of @dimepiece.co is the millennial watch connoisseur. The blonde 31-year-old is known in downtown circles for the ability to lightly parody a ditzy life of iced matchas and Brandy Melville shopping sprees while also being the smartest voice on luxury timepieces for women. Her account and website are a delicious dive into the sometimes intimidating world of watches. Of course, there’s plenty of inspo photos: A ’90s-era Tyra Banks backstage at a fashion show wearing a Swatch and designer Rei Kawakubo flashing a steel Rolex. On her website, she breaks down how to buy a watch, the technical parts of one, and interviews women who have bought their first watch (a series called First Dimers).

Despite all that, Wallner, incredibly, doesn’t own a watch. Well, she has a John Mayer x Hodinkee x G Shock gadget, which reminds me of what a dude going bass fishing would wear. But that changed in early May, when she took me along to buy her first real timepiece.

When we arrive at the Cartier Fifth Avenue Mansion on 52nd and 5th ave, she greets me with a “hey girl!” at the door. She’s wearing her mom’s double-breasted Chanel jacket from the ’80s (her mom had a stint while working at Chanel in Honolulu), a white silk Celine shirt she got at an estate sale, Ferragamo loafers and a pleated skirt, both from a Naples, Florida consignment shop. (She also informs me that she was gifted the Parade underwear that she is wearing.) Somewhere out there, Blair Waldorf is screaming. Next to Wallner is Jolene Kuo, Public Relations & Logistics Assistant of Cartier. She’s polite and pleasant, and her arms are stacked with Cartier-christened metals.

Kuo escorts us to a private room. Everything was extra-fancy-old-school but probably new; the desk reminds me of something that was looted from Louis XIV’s castle. On the table, there is a lone black glove and three watches on a velvet tray. I’m starving as I woke up late, didn’t eat, and commuted from Brooklyn with three subway transfers, but luckily, there is a tray of macaroons. Along with a Cartier monogrammed napkin.

As soon as we sit down, I make a joke about stealing a watch. Kuo assures me that would be impossible as there are cameras. No Ocean’s Eleven heists for us! I’m joking in part because watches feel uncomfortably foreign to me. But Kuo and Wallner are the master horologists here. Wallner’s knowledge goes back to when she worked on editorial content for the Watches Department at the auction house Sotheby’s in 2019. “I realized how women were generally excluded from the narrative,” says Wallner. “I had to really dig to find any information on the women—not just the men—who’ve worn them throughout time.” When she started to think of buying her own watch, she did Google searches and came up with lackluster, repetitive results. “You always see Jackie O, you'll see Princess Diana, and Ellen DeGeneres. She’s a big watch collector. But I felt like there wasn’t inspiration for me in one place.”

From there, Wallner began accumulating images of women in watches. She built an archive of images like a young Sofia Coppola with a vintage Oyster Perpetual Date watch peering through a camcorder, Bethenny Frankel of The Real Housewives of New York doing calisthenics in an Audemars Piguet Royal Oak, and Rihanna grocery shopping with a Cartier Santos. Wallner thinks that the pop culture facet democratizes the exclusive air of watches. “You open up the conversation and automatically make the intimidating world of watches more accessible for ‘outsiders’”.

These days, a watch is made to be seen and be heard, a bull’s eye on the wrist that sometimes culminates in thousands of dollars. After all, Kuo notes, “We all have iPhones, no one really needs a watch.” In front of us, there are three watches: the Cartier Tank Française small for $3,400, Cartier Tank Française medium model, $3,950, and Cartier Tank Française small but in steel and 18k gold for $5,800. First created in 1917, the watch has a square face and a slender band in both metal and leather. I try on the mixed metals version. It looks great and I feel like the refined, shtetl version of Gwyneth Paltrow. Wallner has had her eye on the most modest of options, the Cartier Tank Française. “The guy at Tourneau was like, ‘Oh, you definitely, absolutely want the bigger one,’” says Wallner. Screw a mansplainer: She likes its smaller face.

There’s a lot of talk about watch etiquette here. I ask the women if I’m supposed to wear it on the left. “The opposite of the dominant hand,” says Wallner. There is also the debate about whether a watch should stay put, or be loose. “My watch turns 365 and technically it's not supposed to, but I don't like pieces that are very tight on me,” Kuo says. “Some people want to have that security. It’s really up to you.” The looseness talk is a segue for Wallner to delve into bombshell, gum-smacking babe Adriana la Cerva of The Sopranos. She claims that La Cerva eventually wears her boyfriend Christopher Moltisanti’s watch, a gold Cartier Tank Française because it fits loosely on her. “But she wears it with the dial on the inside of the wrist, so it’s hard to see,” says Wallner. “I’m so obsessive trying to see if it was actually Christopher’s.” It leads me to the question: “Can I wear a watch with the dial on the inside of the wrist?” That creative liberty is kosher. “It’s kind of a statement,” says Wallner.

After about an hour, we are done here. Wallner has decided on the small Cartier Tank Française version. There are goodies that come with it: a warranty card, a little tiny pillow to rest the delicate timepiece on, and a cloth to clean it. Wallner is overjoyed. “I just feel like it kind of validates what I’ve been doing. It’s been a long time coming and everyone assumes I have an illustrious collection,” she says. “But I didn’t have a watch! I worked hard to get here and this is a confirmation of that.” I’m not sure if Kuo is happy or exhausted from the middle school girl energy of Wallner and me but does tell us: “Come anytime. The building hasn’t moved in 100 years.” I tell Wallner I’m off the clock now and don’t have to work for the rest of the day. “Let’s go to Starbucks,” Wallner says. She specifically wants to buy a mocha frappuccino with almond milk with whipped cream. “I need it for a photo with the watch.”