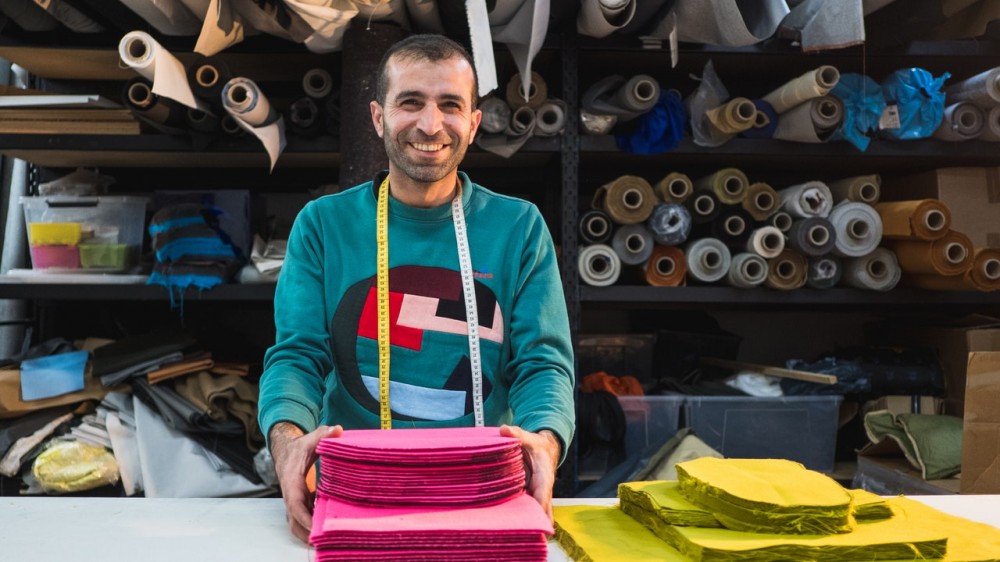 The COVID-19 pandemic has been particularly cruel to the homeless. With much higher rates of underlying health problems, a lack of access to health care, and no way to self-quarantine, the homeless are more susceptible to the coronavirus than other populations. Shelters don’t typically allow for the social distancing required to slow the spread of infection, and that’s if there’s even room. According to the Coalition for the Homeless, the number of homeless New Yorkers reached a record high in October, with upwards of 20,000 single adults sleeping in shelters.

Designer Bas Timmer launched Sheltersuit in his native Netherlands after he witnessed the effects of homelessness firsthand. “I felt the obligation to do something when the father of my two friends who was homeless at the time died due to hypothermia on the streets,” he told Vogue. A Sheltersuit is a warm wind- and waterproof jacket with an optional detachable sleeping bag made from deadstock materials, factory scraps, and upcycled sleeping bags patch-worked together with a designer’s eye. Its large hood shields the wearer’s face from rain and streetlights and features an integrated scarf.

Since founding the non-profit company in 2014, and building a social factory in Enschede, the Netherlands, Timmer and his team have made and distributed over 12,500 Sheltersuits all across Europe. Another social factory in Capetown, South Africa, makes Shelterbags, which are portable, sheltered beds that roll up into bags. They come with a sleeping bag and a built-in pillow and there’s room for an extra blanket or even a thin mattress. A flexible tent pole keeps the hood upright.

Last month, Timmer, who is 30, was in San Francisco and Los Angeles distributing around 150 Shelterbags to the homeless in both cities with the help of local grassroots organizations. “I did a night distribution on Skid Row in LA, that’s no joke,” he said. California has the US’s third-highest population of homeless, over 150,000 people, and over 71% of that population lives outdoors. “The next step,” Timmer went on, “will be to have a presence here, to not just give away the products, but also repair them and wash them with people that have experienced homelessness, to give them job training behind the sewing machine. This trip has broadened my view on the issue and what Sheltersuit can do to assist shelters and the homeless on the streets.”

The Sheltersuit costs about $300 to make and the Shelterbag about $70 and Timmer has funded their production and distribution over the years through donations. This Saturday, he’s shaking up that model by launching a limited edition run of backpacks using leftover scraps from Dedon, the outdoor furniture maker, and TenCate Outdoor Fabrics, a maker of tent canvas. The backpacks were made by the head designer of Sheltersuit’s Netherlands factory. Shasho Ahmed is from Syria and was a refugee; he has many years experience behind the sewing machine and an incredible way with color (see: the color-blocked sweatshirt he wears in the photo above). “What Shasho’s speciality is—he doesn’t want to throw away anything because he knows what it’s like to lose everything,” Timmer said. “That is what actually happens: He makes these products that I think, ‘wow, this is completely made of scraps.’ The whole collection is made from waste.” Available on the Sheltersuit website, the backpacks will retail from approximately $215 and when one is purchased, Timmer and co. will make and donate one Shelterbag to the homeless.

“I really want this to be the future, Timmer said of the one-for-one model, “because I’ve worked for six years on Sheltersuit and my hand is getting heavy asking for donations.” Moving forward, he has ambitions to expand the concept into hoodies, ponchos, and other streetwear items, possibly in collaboration with artists, designers, and other unexpected companies. “I always find it very interesting to use materials that you normally don’t see as valuable: make them, sell them as limited editions for a bit higher price, and get those revenues making Sheltersuits and Shelterbags.”

Sheltersuit is a design-driven NGO, but Timmer sees it growing beyond that. His team is working towards building another social factory, this time in the US. “We can bring much more if we involve the consumer, involve homeless people,” he says, “all in the process of helping one another.”

The Sheltersuit backpacks start at approximately $215. Shop them here.