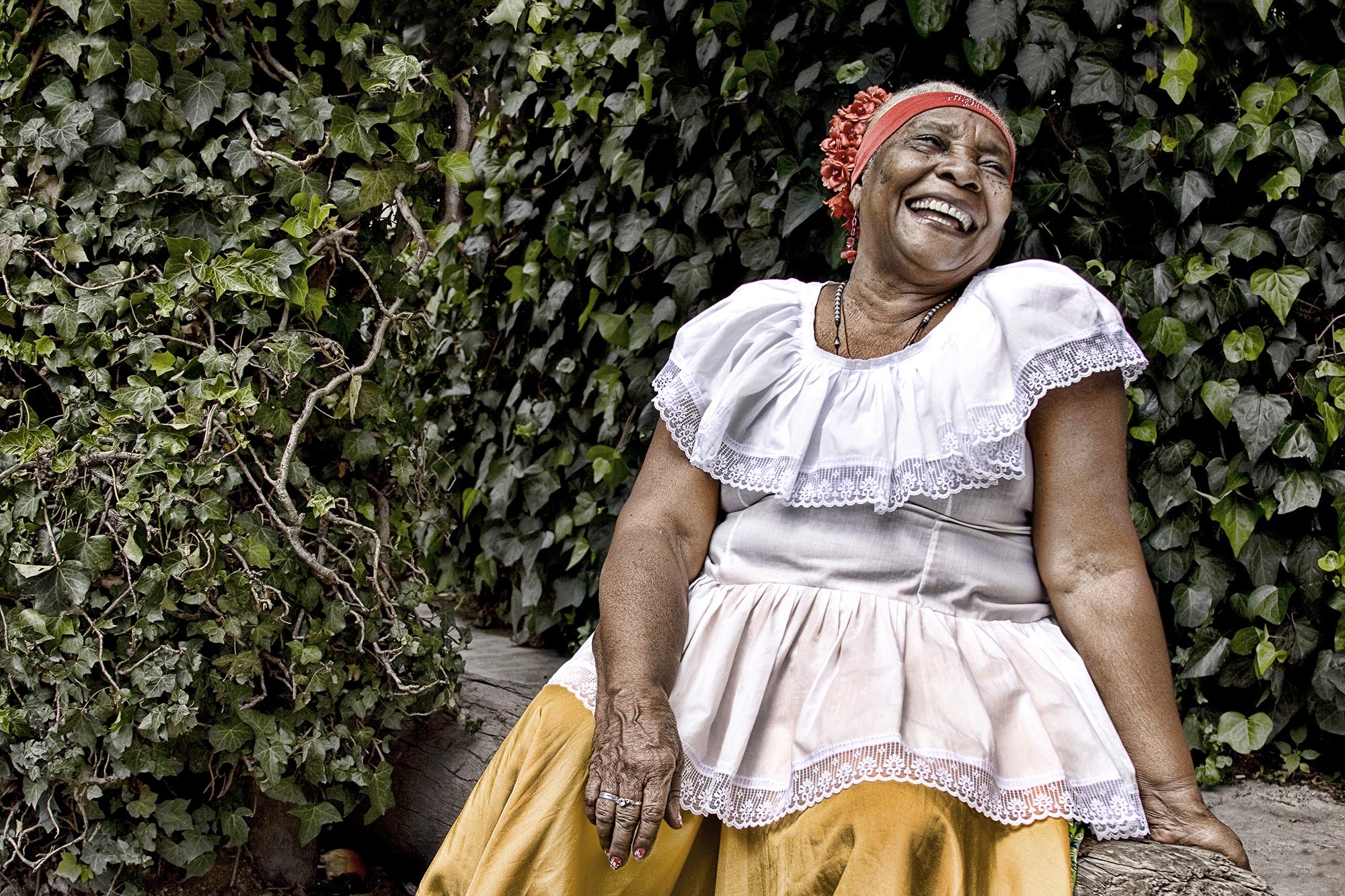 Bullerengue, the percussive, female-led folk tradition developed in Black Caribbean communities, was passed down to the legendary Petrona Martinez like a sacred family heirloom. Growing up in San Cayetano, Colombia, in the 1940s, she’d sit with her grandmother and great-grandmother in what’s called a rueda, or circle, where the women would take turns singing call-and-response melodies. The sounds came to Martinez as naturally as breathing. “That’s where the artistic vein formed,” says her daughter, Joselina Llerena.

Years later, after starting her own family, Martinez moved to the region of Palenquito. She made a living by gathering and selling sand — intense, arduous work that she’d lighten on the weekends by taking her children to a nearby river, where she’d do the washing and sing the songs she’d learned as a girl. One day, a local musician named Marceliano Orozco was talking to one of Martinez’s older sons, and he mentioned that he’d often linger by the river to listen to a remarkable woman who would spend her time singing some of the most powerful bullerengue he’d ever heard. It didn’t take long for Martinez’s son to realize that Orozco was talking about his mother, and soon, Orozco became part of Martinez’s first band. She started to play at festivals across Latin America and released her first album in 1989, at the age of 55, cementing her reputation as an inimitable custodian of bullerengue traditions.

Chasteness, Soda Pop, and Show Tunes: The Lost Story of the Young Americans and the Choircore Movement

Martinez’s voice has continued to mesmerize listeners over the past several decades, even after a cerebral ischemia in 2017 limited her speech and mobility. Last summer, she released the acclaimed album Ancestras, a dynamic, emotionally charged celebration that brings together women from the African diaspora to sing on some of the most indelible recordings from Martinez’s catalogue. The result is a powerful union of Black roots from across the world that features artists such as Susana Baca, Angélique Kidjo, and Brianna Thomas.

Llerena, who also sings on the project, describes Ancestras as a way to weave musical histories together, something that served as an ultimate “dream come true” for her mother. The project was nominated for a Latin Grammy for Best Folk Album in September — Martinez’s third nomination — and when the ceremony took place last fall, Martinez won her first-ever award from the Latin Recording Academy at 82 years old.

Work like Ancestras has continued to reinforce Martinez’s place as a cultural titan who has profoundly impacted musicians everywhere. The Grammy-nominated artist Lido Pimienta fell in love with Martinez’s music when she was part of the band Grupo KUMBE in Barranquilla. They studied bullerengue sounds carefully, which gave Pimienta a chance to explore the deep personal stories Martinez tells through her songs.

“There’s a general untold story of slavery that happens in Colombia, specifically,” Pimienta says, noting that Martinez captures the lived experience of Blackness in Latin America. “The amazing thing about Petrona is that her resilience is so enormous, it transcends anything. She’s telling you that life is worth living. Her tradition is going to continue even when she’s gone from the physical world. That’s what I take away from her music and from her voice — she’s saying, ‘We’re still here.’”

Bullerengue is deeply tied to Colombia’s history of enslaving people, explains Stanley Montero, an artist and instrumentalist who has been a part of Martinez’s musical family for decades. The Colombian city of Cartagena was a principal port for trading enslaved people, and many escaped to form Palenque communities of cimarrones across the Caribbean coast.  In those communities, bullerengue traditions thrived, pulling from deep African customs. “You can extradite a human, you can displace them, but you can’t do that to the culture they bring with them,” Montero says. “So these traditions manifest themselves through our African ancestry.” According to some accounts, the earliest forms of bullerengue were sung by pregnant women who were confined at home. The music was passed along the generations, reaching Martinez. “She comes from an impressive bullerengue genealogical tree,” he says. “Bullerengue is embedded in her DNA.”

Though Martinez has faced health challenges more recently, Llerena says her mother has been making progress — and that her music continues to be her great joy. “She’s at every rehearsal,” Llerena says. “It’s not practice unless Petrona is there.”

When the Latin Grammys took place in November, the musical matriarch was sitting in her bright blue living room with her family in Palenquito. Llerena and her siblings surrounded Martinez and reminded her of something she’d said when she first got nominated: That if she won a Latin Grammy, she was going to dance. “Well, let’s dance, because you won!” they told her in a video clip that boomeranged across social media. The family erupted into cheers while Martinez was overcome with emotion.

The recognition was meaningful, but Pimienta urges musical institutions to do more to reward and fully appreciate the scope of Martinez’s work. “In Colombia, the media doesn’t celebrate Blackness and indigeneity — it’s something that’s relegated to national holidays or festivals. And this happens all over Latin America,” she explains. “Hopefully, more people with good intentions start looking at Afro-Colombian and indigenous music and see it as more than a decoration. Petrona will always be a huge figure and an influence to the world, and she should be celebrated every single day.”

Montero agrees on how crucial it is to honor Martinez’s music today. “The chapters that make up Petrona’s life are more open than ever,” he says. “She’s said at every concert and every show that the inheritance that she’s leaving her children and her grandchildren is the same one that was left to her: this musical legacy. That’s why her story will always live on — and it’s a moral, spiritual, and social imperative to protect that, because this is part of our cultural identity. This is a part of our national heritage and folk tradition, and it’s something Colombia needs.”