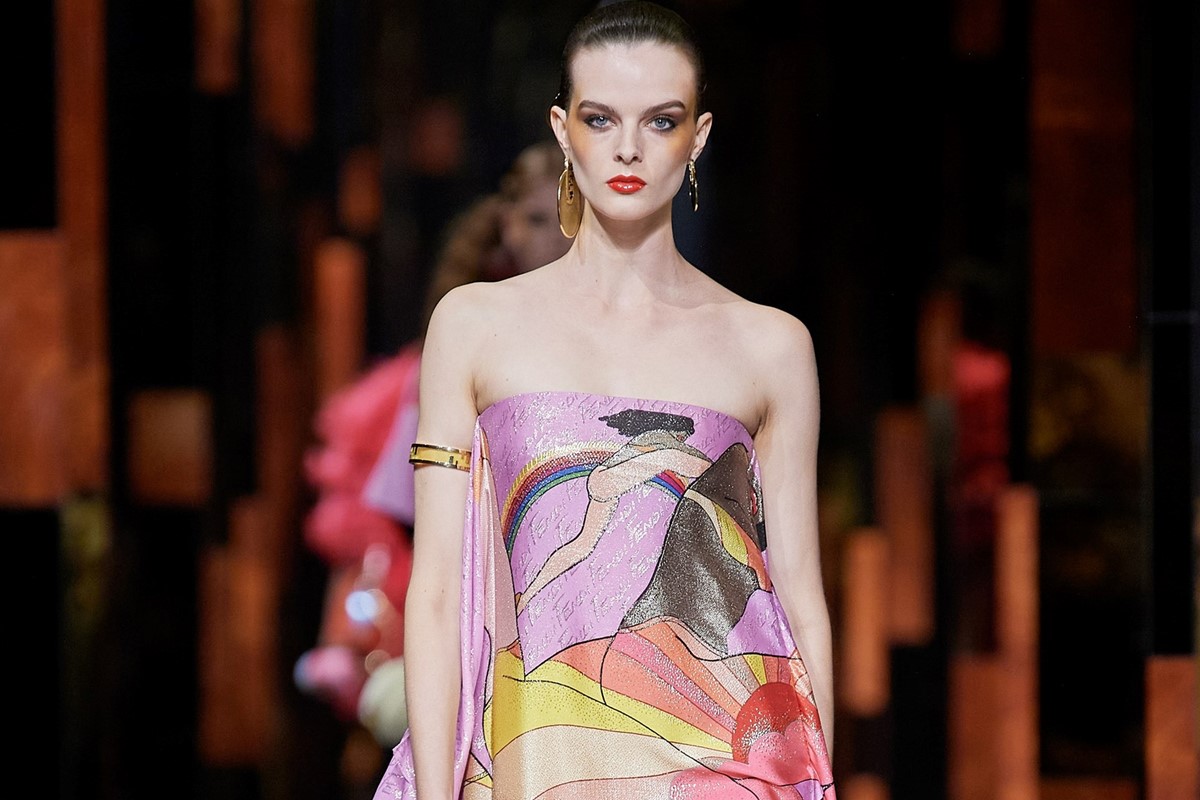 With London Fashion Week SS22 drawing to a close last night, the fashion circus has descended on Milano in a haze of cigarette smoke and Santal 33 for the first time since coronavirus restrictions kicked off and editors fled in February 2020. Scoring the first big spot on what’s actually a pretty tightly packed schedule was none other than Fendi, where Silvia Venturini Fendi and Kim Jones gave a downsized audience a glimpse at what they’d been working on for the past six months. Here’s everything you need to know.

GUESTS WERE CONFRONTED WITH THEIR OWN REFLECTION

…in floor-to-ceiling mirrors opposite the catwalk. Seeing 100s of masked faces staring back at you? Yeah, pretty unnerving actually! As the lights went down, the runway was plunged into darkness, with only the glare of iPhone screens illuminated like plankton in the deep blue. When they finally ascended once more, they bounced through a mirrored maze of colonnades that had been erected in Fendi HQ’s image. As crackling house remixes of “Ain’t No Mountain” and “Now That You’re Gone” kicked in, it was clear that Jones and Venturini were attempting to transport the audience into the spangled, mahogany-walled rooms of the 1970s.

THE COLLECTION JOURNEYED THROUGH THE DISCO ERA

The first few looks out on the runway consisted of chic, knife-cut, multilayered tailoring. Immaculate white, Bianca Jagger-esque pant suits were bisected at the hip to reveal swishing panels of fabric, while nipped-in coats with irregular panels were buttoned to the neck and matched with similarly graphic knee-high boots.

These slick styles eventually gave way to fluid Studio 54-appropriate silk kaftans cut dangerously short or otherwise trailing behind the models, shimmering with sequins, as they strutted through the space.

Later, a succession of flippy fringed flapper dresses (we are in the so-called roaring 20s, remember?), seemingly weightless marabou and ostrich feather coats, and quilted minis and matching swing coats in soft, sugar-sweet shades of marshmallow suggested Jones was really getting into his stride at the revered Italian house he now calls home.

…BUT THERE WERE FLASHES OF Y2K, TOO

Will our raging desire for all-things-noughties ever be satiated? All signs point to… not yet. Though the Fendi design duo dialled back the clock when it came to the collection, they punctuated it with slightly more recent references in the form of frameless rose-tinted sunnies, logo-emblazoned gold pouches (including some covetable wristlets that are sure to have the girlies salivating). Fun fur sandals in candy hues also harked back to the halcyon days of the turn of the millennium, with many finished with sculptural ‘F’ for Fendi heels and barely-there straps.

IT WAS IN COLLABORATION WITH THE ESTATE OF ANTONIO LOPEZ

This season, Kim Jones expanded his collaborative repertoire, taping the estate of Antonio Lopez for inspiration. Primarily a fashion illustrator, Lopez, together with Juan Ramos, rose to notoriety in the 1970s, pushing womenswear designers to champion a new, empowered sensuality. Described by the estate as “rampantly bisexual”, it’s safe to say that Lopez was a friend to all, including Bianca Jagger, Karl Lagerfeld, Jessica Lange, and Jerry Hall – with whom he had a brief romantic relationship. His artwork was splattered across accessories, tailoring, and spilled down flowy kaftans – speaking to the fabulous and decadent life he once embraced. Or, in other words “Sex, Fashion, Disco”, as the documentay dedicated to his life was aptly titled.