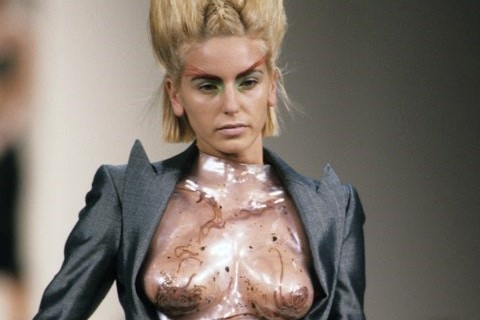 From The Hunger at McQueen to Raf Simons’ obsession with Christiane F, fashion loves a niche movie reference

The feedback loop between fashion and film is, at times, more of a scribble than a clean circle. From Yves Saint Laurent’s costume design for Belle du Jour to Miuccia Prada’s offering in the soon-to-be-released The United States vs. Billie Holiday, cinema frequently enlists favours from the fashion world. In turn, designers untack moments from the silver screen and pin them to their moodboards, patchworking together collections made up of rich filmic references.

Almost every season, we see cinema’s mise-en-scene reconstituted through the eyes of a designer and while this is usually subtle – a wallpaper print, a score, a scene’s colour palette – it’s key to uncovering the kernels of meaning burrowed deep within a collection. More Mubi than Netflix, these references tend to circuit back to movieland’s chinstrokey, cult classics. See Salvatore Ferragamo, who this season, built a collection indebted to Uma Thurman and Ethan Hawke’s uniforms in the 1997 sci-fi classic, Gattaca. For AW21, Ferragamo’s creative director, Paul Andrew, proposed “a new uniform for our new world”, made up of colours like “boy-scout green, janitor brown, girl-guide mauve, and cheerleader pink”.

While often reduced to an aside in show notes, these cult-crossovers are not only proof of fashion’s polyphonic set of influences but are testament to a designer’s capacity to melt down pre-existing worlds and remould them under a new, future vision. After all, a designer’s universe spans further than just clothing and the interrelationship between film and fashion is only the beginning. Below, we take a further look at some of the traces that cult cinema has left on the runway.