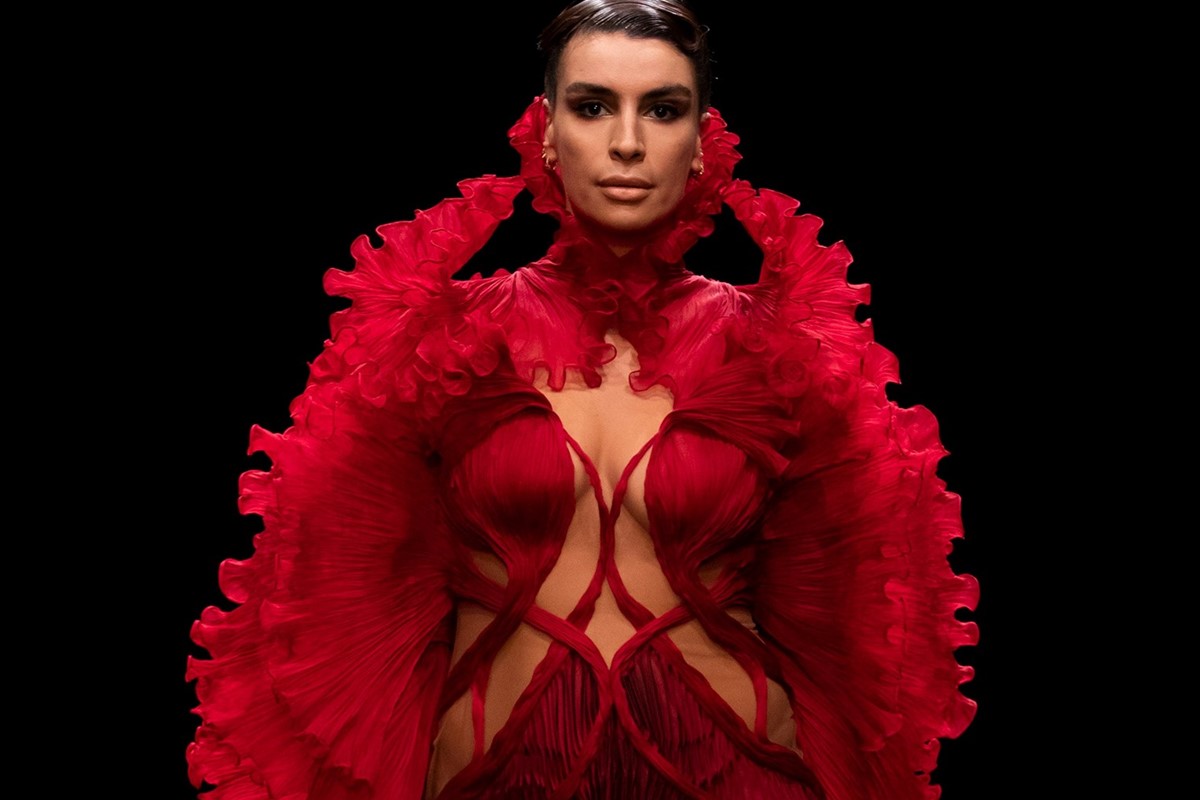 In an industry that goes harder and faster with every passing season, Iris Van Herpen does things differently. Eschewing budget-busting shows and influencer-packed front rows, the innovative Dutch designer is renowned for taking a deeply considered approach to her work, as she turns all manner of flora and fauna into dresses and gowns that burst with life: seriously, if you didn’t know better, you might not take a whole lot of convincing that her clothes were living, breathing entities.

As part of the SS21 Haute Couture schedule, now, Van Herpen debuts her most recent foray into the natural world, with a showstopping collection that draws inspiration from Merlin Sheldrake’s Entangled Life. A deep dive on fungi and its vital place in the earth’s fragile ecosystem, the book’s influence can be seen throughout the offering, with mushroom-y pleating crafted into billowing chiffon gowns, twisted satin straps that appear to grow up the body, and 3D-printed fungus-like lacework all on the line-up.

With Van Herpen dedicated to exploring and utilising new sustainable fabrications and practises within her work, much of the offering is brought to life using eco-friendly materials: SS21 sees her join forces with Parley for the Oceans, which transforms dumped plastic debris into technically innovative fabrics, and has also collaborated with the likes of adidas.

With the virus that needs no introduction putting paid to an IRL show, this season, the designer opted to present the collection through a short film, with catwalk icon Natalia Vodianova and Dutch-Iranian musician Sevdaliza taking centre stage. Having recently appeared in films for Marine Serre and Ninamounah, and walked the runway at Y/Project, Sevdaliza had long been a fan of Van Herpen’s work, and had been waiting for an opportunity to work with her since they were introduced by friends a few years ago.

“I recognise my own artistic process in hers, and our artistic universes collide,” says Sevdaliza. “She’s a timeless artist: the organic shapes, structures, and movements in nature combined with futurism, architecture, and technology make her collections truly visionary. They resonate deeply with my vision of art and the world.”

Stepping into a red, silk chiffon gown, the musician explains the look was created especially for her. “The top was inspired by a ghost mantis, and the skirt was inspired by fungi,” she adds. “Wearing it made me feel very empowered and inspired.” Rippling softly as she walks, the back of the dress is cut so as to reveal her distinctive tattoos, which in themselves become another element of the overall look.

This likely isn’t the last you’ve seen of Sevdaliza on the runway, either. “There’s a new generation of designers who are pushing the boundaries and breaking out of the cycle of consumerism by following their intuition and creating forms of expressive, wearable art, she says. With Van Herpen, Ninamounah, and Marine Serre ticked off her list of collaborators, stay tuned to see where she pops up next.